ikan, the American video equipment maker, has unveiled a slew of new LED lighting fixtures at the National Association of Broadcasters (NAB) trade fair in Las Vegas, which took place last week. The products are aimed at photographers and film-makers.

The company’s latest lights feature LCD touchscreen controls in addition to conventional analogue dimmer knobs. Models include the rectangular IFD576 panel, which is daylight-balanced, and its bi-colour brother the IFB576. There are also more powerful versions of each with more diodes: the IFD1024 and IFB1024 respectively. According to the manufacturer these fixtures have a “high brightness and high CRI” with supporting data said to be coming later.

The firm has also announced two new lights with DMX support, the IDMX500 (daylight balanced) and the IDMX500T (tungsten). They are dimmable, have wireless remote control and built-in barndoors. These units will similarly benefit from touchscreen controls on the rear LCD (see below). 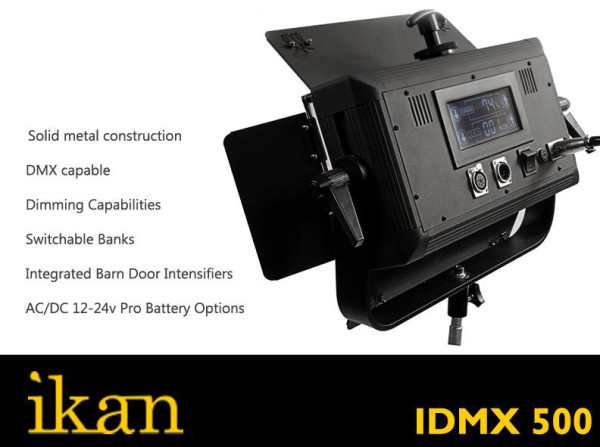 We have also been told that ikan will be “coming out with a V2 version of the 312 bi-color LED light with digital read out and new barn-doors” but official information on it is not yet available.Â For more information on ikan, visit theirÂ web site.