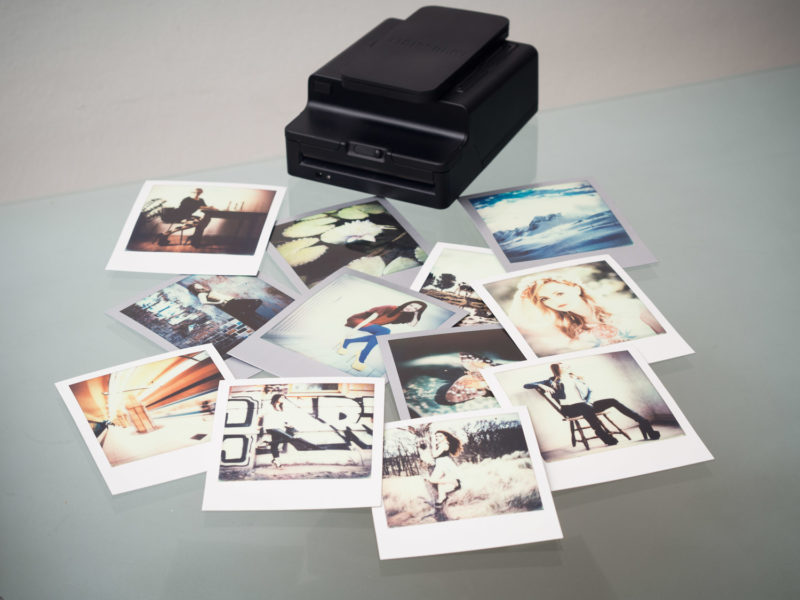 It is fair to assume that photographers always look for methods to differentiate themselves amongst the high number of photographers that are currently competing with each other. This can be realized by excelling in quality or having a unique style. Personally for me, I consider the client interaction as a very important aspect. By giving clients a great experience they are more likely to be a returning customer or recommend you to friends. One method I have applied before is to give clients directly a Polaroid as a souvenir of the shoot. The idea is great, but it does not always work in practice. Polaroids are unpredictable and usually they do not capture the magic moment. Only afterwards you notice that one person blinked or there is something else wrong with the shot.

Ideally, one would be able to turn the best shot of the shoot into a Polaroid. Thus making a chemical print of the digital file you obtained with your digital camera. The people at the Impossible Project, who are known for bringing the discontinued Polaroid paper back to life, thought this was a great idea as well. A while back they created a Kickstarter for this product, called the Impossible Instant Lab. They modified a Polaroid camera in such a way that a iPhone can be placed on top, projecting the image on the screen of the iPhone on the paper. This process enables one to make a print of a digital picture on the iPhone. While it sounds like a great idea, how well does it work in practice?

The first thing that I noticed after removing the printer from the box is that it does look rather like a Polaroid camera. Shape and form of the unit is similar, except that the top now consists an extendable tower with a holder in which a iPhone can be placed. In general the unit is well build and has a nice touch to it. The Instant Lab is made from a solid plastic and feels quite sturdy.

After charging the device and inserting a pack of film inside it you can start printing. This is done by downloading an application for the iPhone which guides you through the process of transferring the image on your screen to the Polaroid paper. When you have selected the image and the settings you simply lay the iPhone in the cradle. The iPhone tells you through both audio and visual feedback (LED on the back) when you have open and close the darkslide. After you have exposed the paper you press a button on the device to eject the paper. Similar to other Polaroids cameras you will have to wait quite at least 30 minutes before the chemical paper stops developing and your have an accurate representation of how your print looks like. 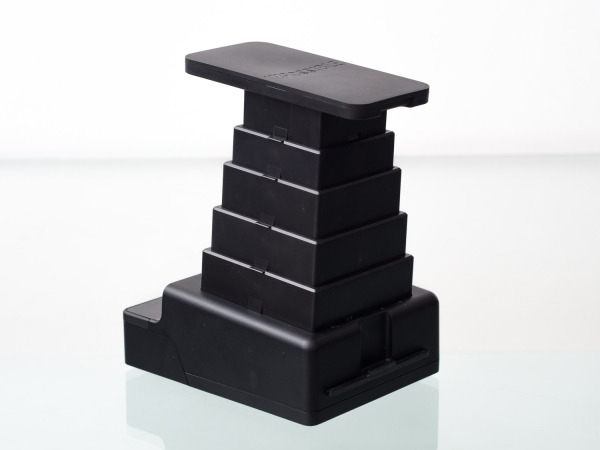 Although the previous process sounds quite complex, it is surprisingly easy to do. The application is made in such a way that it guides you through the process the first time you do it. No manual or instruction videos required.

It is important to realize that the Instant Lab requires the images to be on a iPhone to print them. With the introduction of the WiFi enabled cameras this has gotten a lot easier, personally I have used an Fuji X-E2 to transfer images off my camera to my phone which works rather well. Since my Nikon D800 does not have WiFi it is left out and I would not be able to print images directly in the field without going to a computer.

The quality of the prints is caused by two factors: the device and the chemical paper. To project the image on the iPhone a lens is used, similar to a lens that would be found on a conventional polaroid camera. Essentially, the Instant Lab is taking a picture from an iPhone screen. Like other lenses, the lens inside the Instant Lab is far from perfect. Corners of the picture are significantly darker and less sharp compared to the centre. My assumption is that the Impossible Project comprised on lens quality in order to keep the device portable and affordable.

More important is the chemical paper that is used which determines the colours and the dynamic range of the prints. If you have used a Polaroid camera before you can confirm that the final results have weird colour shifts and a limited dynamic range, i.e. high lights are easily blow out and shadows quickly fade to black. This is the nature of the polaroid paper, the Impossible Project cannot be blamed for this and one could even say it is the charm of shooting with a Polaroid camera. However, it should be noted that it has a big effect on the final results, i.e. how your print will look like. See also the results underneath.

If you take into account both the effect of the projection lens and the paper you have realize that prints do not turn out as they look on your phone. What you see is definitely not what you get. Resulting effect looks an awful lot like the results that would be gained with Instagram. Some of the filters in Instagram can be charming, but the situation where you should use them in is very limited. I took the picture above and used Instagram (and some contrast/brightness adjustments) to get it looking as much as possible as the result I got with the Instant Lab. Underneath you can see the version as it would be printed compared to the original one.

In the end it comes down to this, by printing your picture you are not creating a physical copy of the digital image you have, but a different image that somehow resembles the original photo. It is quite unpredictable what the final result will look like so you donâ€™t need to be afraid to experiment a bit. This is where the catch comes. A pack of paper costs around 20 euro (depending on the type) and gives you 8 prints. For 2.50 euro (excluding the cost of the Instant Lab itself) I find this quite expensive for a bit of experimentation. If this was a business expense I could justify it, but since the quality of the print differs from shot to shot I am not willing to give it to clients. Maybe I havenâ€™t used it enough to be able to predict what kind of pictures work and which do not, but I highly doubt that I will be able to predict it.

What I also strongly dislike is that it is iPhone only. I donâ€™t understand that Impossible Project had to make a version where a print is made by taking a â€˜pictureâ€™ from a iPhone screen. Essentially it is a screenshot. They could have also integrated a small screen inside the device making it a universal device that communicated through WiFi with your smartphone. Obviously they must have had their reasons to make the Instant Lab work like this, but these reasons are not clear to me.

Personally I would label the Instant Lab as a gadget for iPhone users. When you are able to afford it and the paper it requires to experiment a bit it is a lot of fun. Polaroid prints have and will always have something magical to them. When a photo is suited for the effect that the Instant Lab it gives it, then the print is something special. Unfortunately most of the time the prints are overcooked so to speak, since the effect is too strong and it ruins the photo.