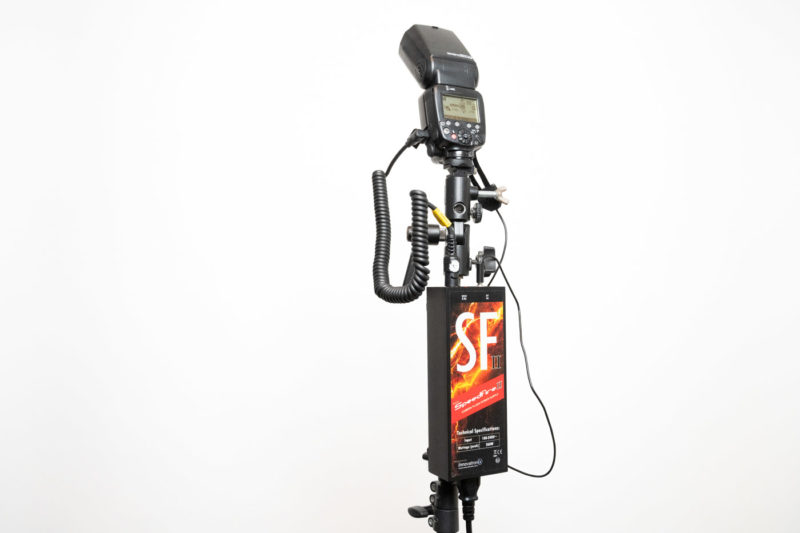 Ever wondered what it’d be like to power your speedlight from the mains? The Innovatronix Speedfire II lets you do just that, speeding up your recycle times and helping you shoot for longer. Today we’ll be having a look at how it works.

Innovatronix provided me with some samples to demonstrate you can power your speedlight with mains power instead of AA batteries. While AAs might be commonly available, for many people they are quite a nuisance, to say the least. I can name numerous disadvantages, but in the end if you use them yourself, you know them already by now. For me it is the whole management of the batteries that annoys me the most. If you want to power a few speedlights you need a lot of batteries, from which you don’t know how full they currently are and how much capacity they can actually hold.

This product is for people that want to create a semi-permanent setup, such as for ID photos or inside a photobooth, but it is also for photographers that use their speedlight in their home studio and are looking for better performance and predictability. So long as you have mains power nearby, you can create a semi-permanent studio setup with the Speedfire.

So why not just get a studio light instead? Speedlights have some unique features that cannot be found on strobes. Speedlights are available everywhere (you might already own one), offer precise control (TTL, HSS and low minimum power output), have short flash durations and can zoom to concentrate their light output. On top of that they are also cheaper, smaller and lighter than strobes. That said, speedlights are not as powerful as strobes, but while a studio flash may be more powerful, a speedlight is more than enough.

What do you need?

In order to use the Speedfire II with your speedlight you first need to check if your speedlight is compatible. Most speedlights have a high voltage port into which an external power source can directly feed into to power the capacitor.

There are three types of high voltage ports. They all basically do the same thing but use a different connector. The Canon (CP-E4) style of port is used by most manufacturers and can be considered as the standard, but there are some brands that don’t use this one, instead the Sony of Nikon version. In the pictures underneath you can for instance see that the Nissin flash has a different connector (Sony style) compared to the Godox (Canon style). 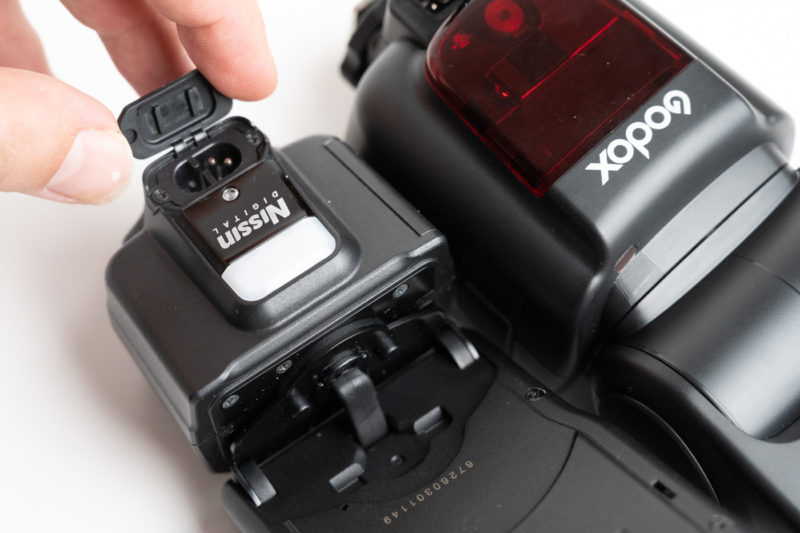 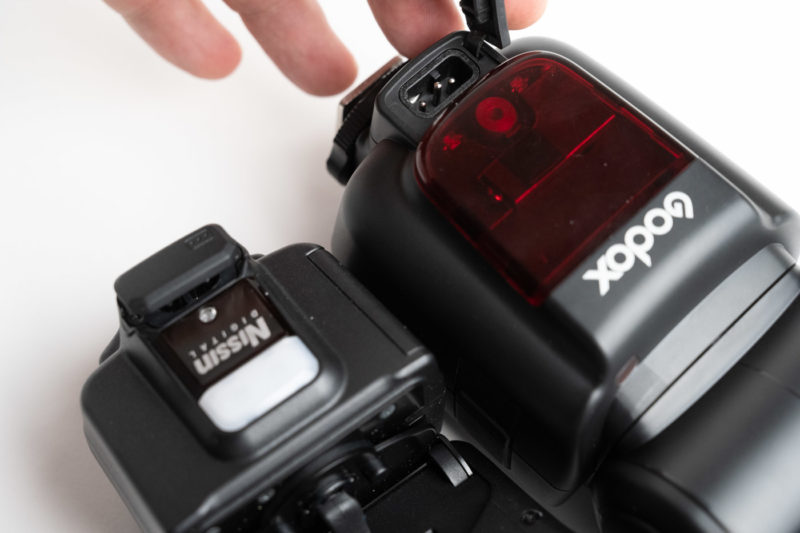 So if your speedlight features both a high voltage port and is powered by AA batteries then it is suited to be powered by the Speedire.

After unboxing the Speedfire it takes only a couple of minutes to get it ready to start shooting. In the box of the Speedfire you will find the adapter itself, a cable to connect it to mains power and two cables which need to be inserted into the speedlight. 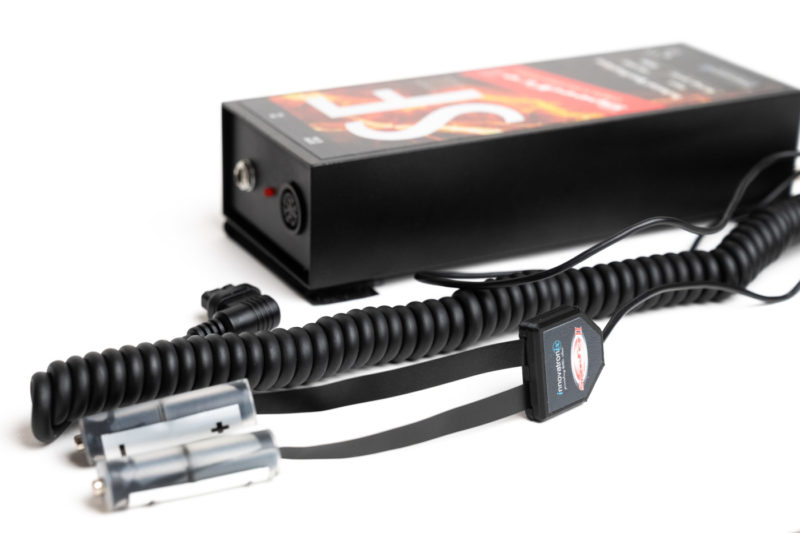 The adapter itself is roughly the size of a speedlight and features two velcro mounting straps which can be used to mount it to a lightstand. Once the power cable is inserted the device directly turns on.

There are two cables that transfer the power from the Speedfire to speedlight. On the speedlight end of the first cable there are pair of dummy batteries, which inserted into the place where normally the AA batteries are inserted. Depending on the type of battery door that your speedlight uses, it might not close properly anymore, but in this case a rubber band does the trick. Note that the battery door does not need to be closed for the Speedfire to provide it’s power. 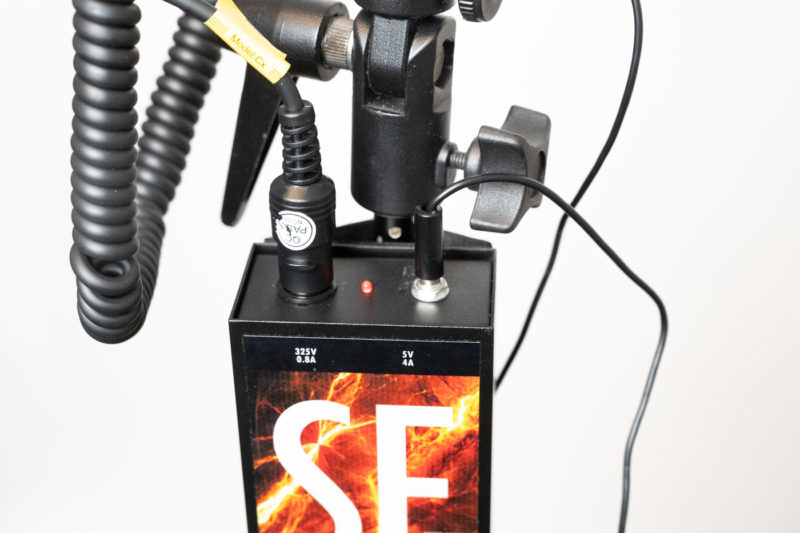 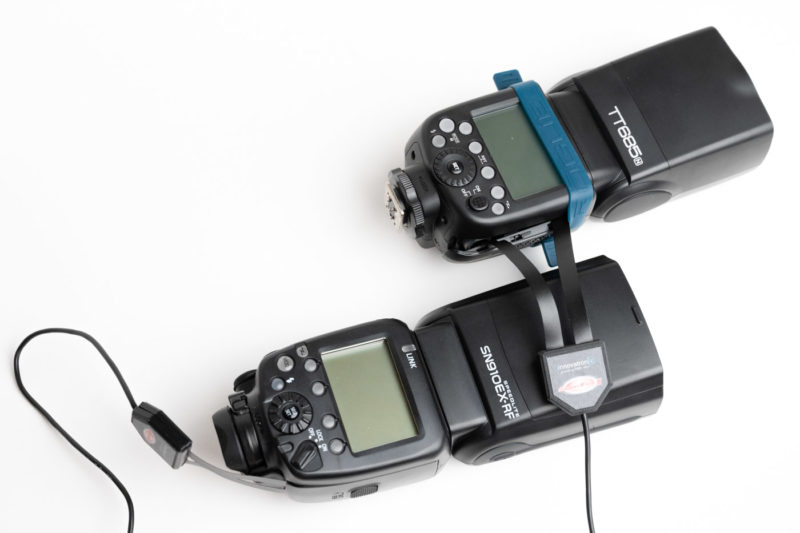 Once the Speedfire is mounted, all three calbes are connected you are ready to start shooting.

When it was time for my planed photoshoot I could just connect the mains cable into the socket and all my speedlights just turned on. No need to charge AA batteries before and load them in the speedlight. And this will be exactly the case for a second, third and more photoshoots. No reason to worry about the state of my states and replacing them midshoot (after I missed multiple photos because the empty AA batteries give a very long recycle time). 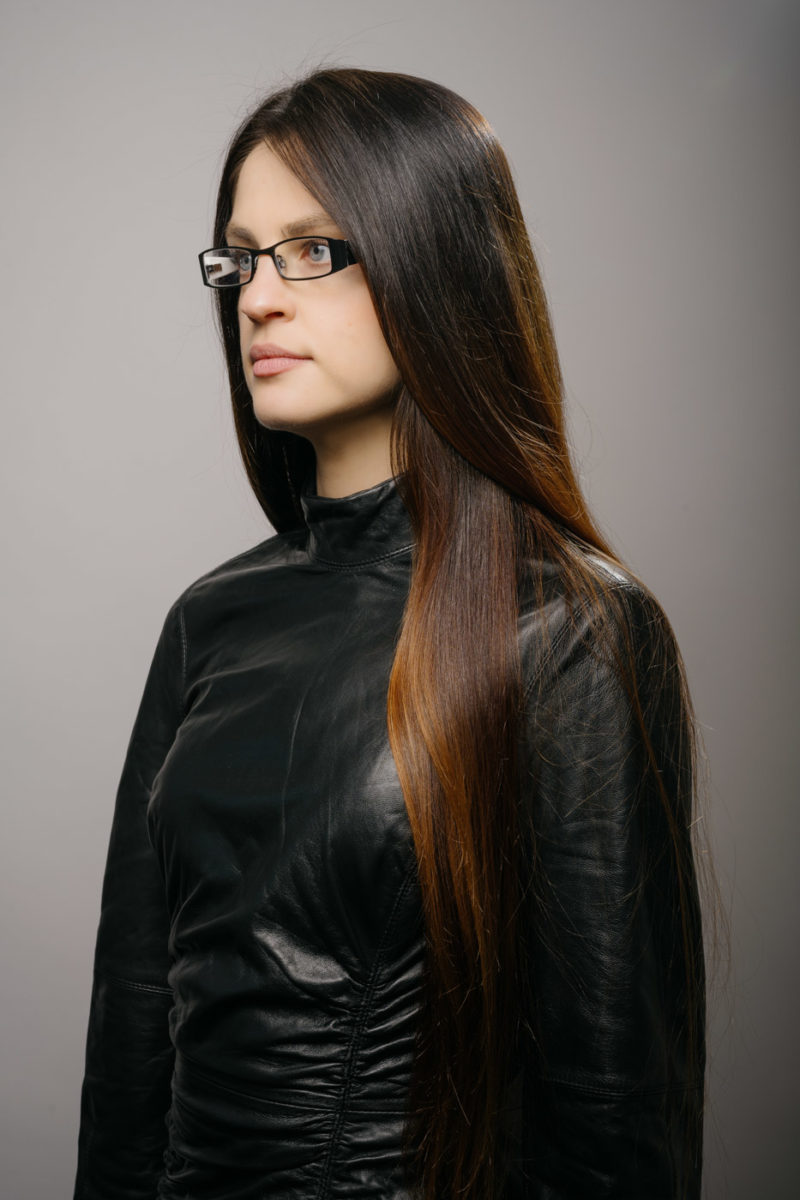 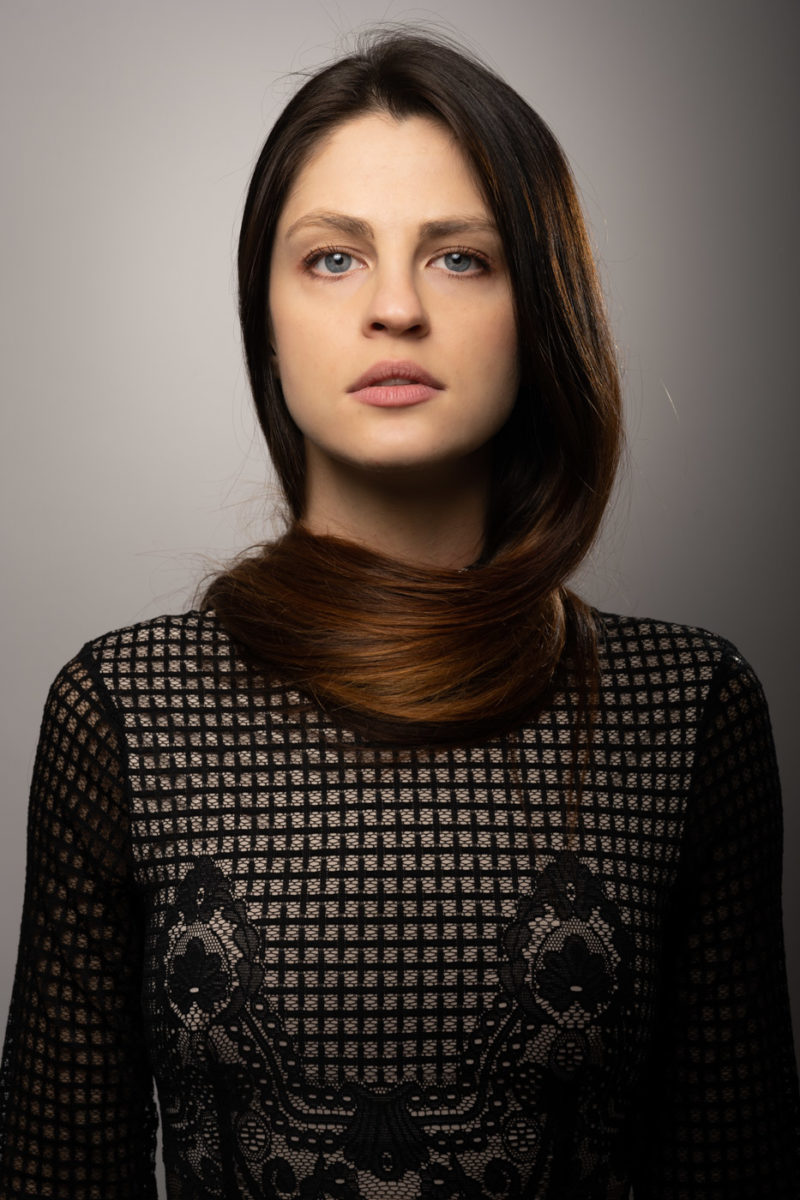 You will hardly notice a difference during your shoots. With mains power the speedlight acts identically as it would with AA batteries, besides one thing which is the recycle time.

Since the speedlight does not have to draw power out of the AA batteries to power the capacitor it will recycle much faster. A Godox TT685 powered by AA batteries would normally recycle in 2.6 seconds at full power, but with the Innovatronix Speedfire II the recycle time is just 0.8 seconds.

While sub-second recycle time is amazing, I have to add that not all speedlights are designed to operate at this speed. If you do not give the flash sufficient time to cool down then there is a risk that you damage it. So be careful with too many full power flashes without giving your speedlight time to cool down. 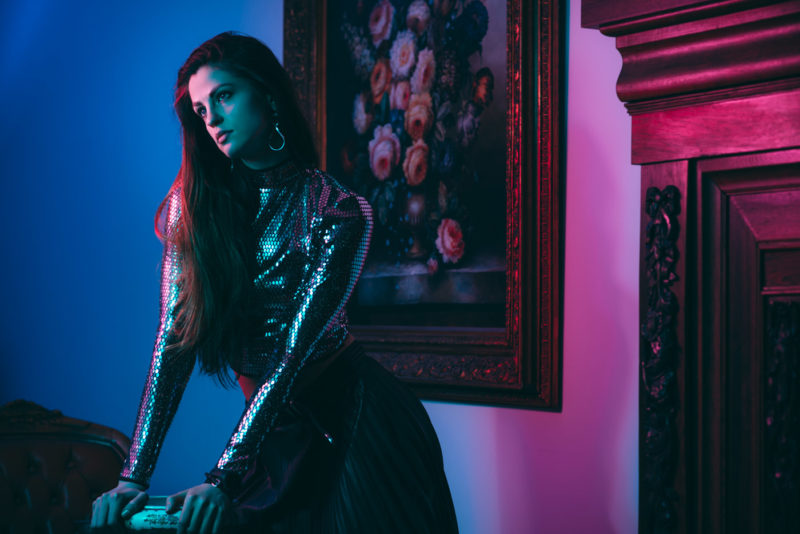 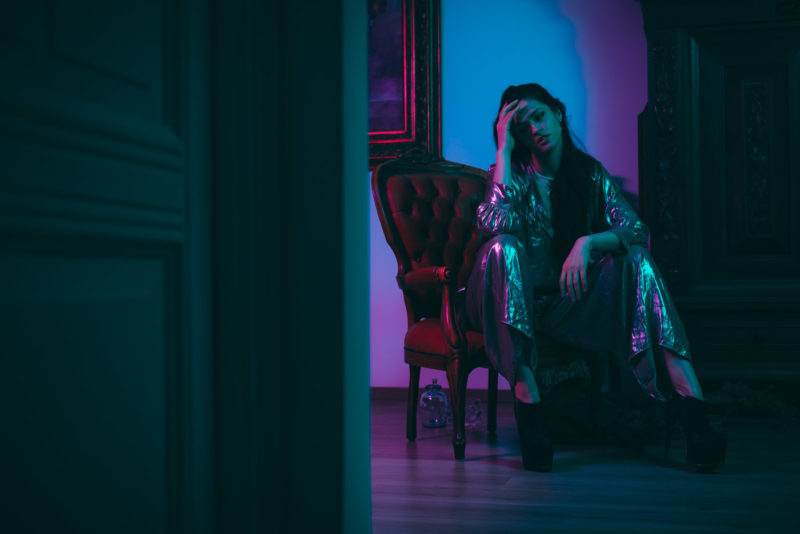 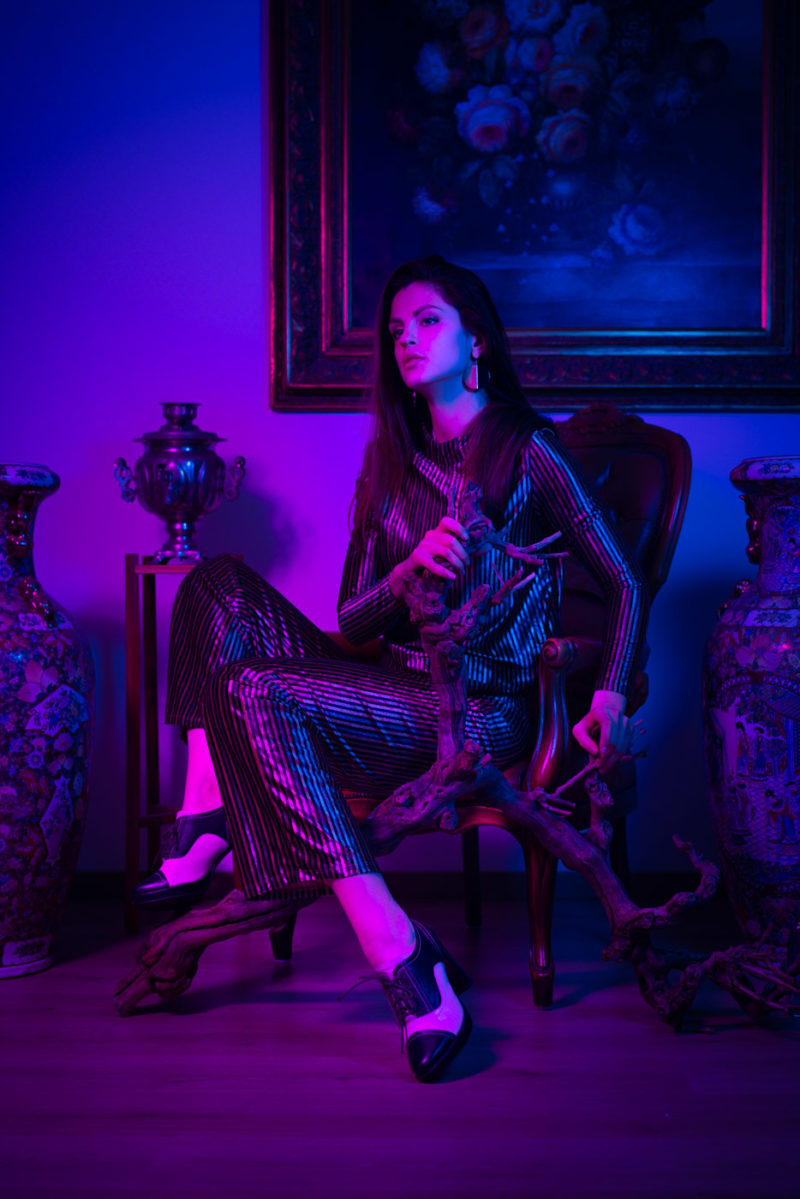 If you are a photographer that either uses semi-permanent setups or wants to get rid of AA batteries in their speedlights the Innovatronix Speedfire II is up to the task.

In this article we have taken you through the process of checking if your speedlight is compatible and how to set it up, with some background information for when and where to use this product. If you have any questions regarding the Speedfire please let us know and we will come back to you.

Thanks to Innovatronix for sponsoring this article.