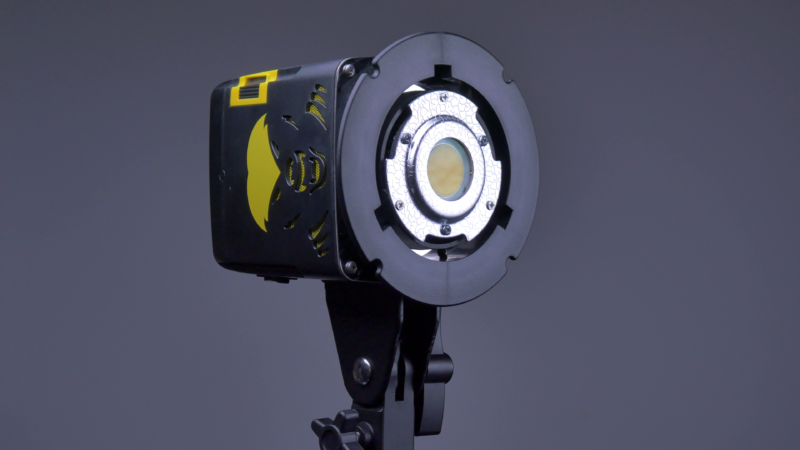 Interfit kindly lent me a Badger Beam, their newest LED COB monolight, designed for photography and video lighting. I’ve been testing it over the past couple of weeks. How much light does Â£200/$200 get you?

The Badger Beam (HBB60) is the third light in the Interfit Badger series, which started with the Honey Badger studio flash, later followed by the Badger Unleashed, an AC/DC version. The Badger Beam is the same basic boxy and colourful design, but in the form of a continuous LED light rather than a xenon flash. Like the Badger Unleashed, it has a proprietary lithium ion battery that slots into the top of the head; and you can also run it from the mains.

It is a monolight, in the true sense of the word: no external ballast or control boxâ€”the head is a self-contained system. Grab the light and go, and there are no pieces to lose. The only other component is the laptop-style mains adapter, which powers the light in AC mode when plugged into the head, or charges the battery when plugged into that (as far as I can tell, you can’t charge the battery while it’s in the head). There is also a low-profile protective cap for the LED chip.

At 60 watts, the Badger Beam is probably the minimum power you’d want from an LED video or photography light if using modifiers such as softboxes and umbrellas. For indoor use it’s just enough for most applications, but you might want something more powerful if working outdoors.

You won’t find fancy features like DMX control, bi-colour adjustment or even remote control in the Badger Beam. It’s pitched as a cheap and cheerful, no-nonsense light for beginners or shooters on a budget. The Bowens S-fit accessory mount is as close to a universal accessory standard as you are likely to find.

Around this mount is an extra lip, which holds Ezybox-style pop-up softboxes without the need for a metal adapter. My kit included one of these 24″ square softboxes, which packs down to an amazingly small package, while still including double diffusion, and being easy to set up. Depending on what kit you get, you may also get a standard 7″ standard reflector with a set of barndoors and gels. The only thing missing, in my view, is a grid for the softbox, but you can buy those separately easily enough.

Build quality of the Badger Beam is perfectly acceptable for a tool in this price range. Nearly everything, including the Bowens mount, is made of sturdy plastic, which feels like it can take a knock or two. The battery slots into place precisely, the tilt bracket works well enough and the Bowens mount holds accessories securely with minimal rattling. You can’t adjust the position of the light on the bracket, and it’s a quite a short and squat shape, so it might not be a good idea to mount really big and heavy light-shapers to this fixtureâ€”but as it’s only 60 watts you probably wouldn’t want to, anyway. 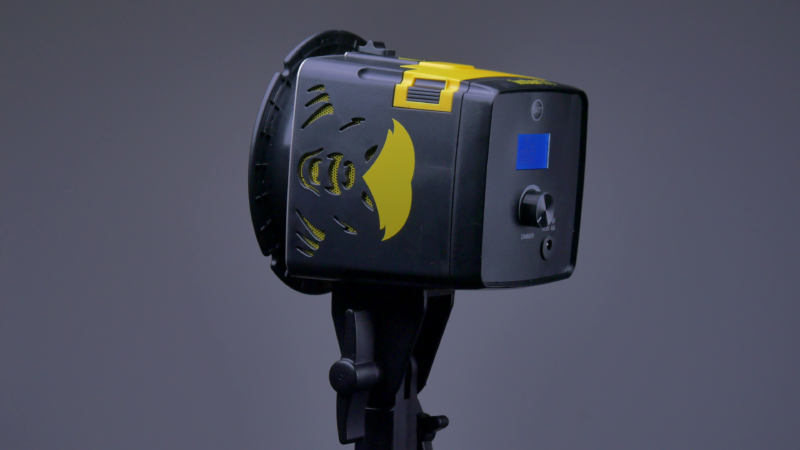 The badger-themed design elements have been toned down slightly since the Honey Badger and Badger Unleashed, with the body mostly black with yellow accents for the side cooling vents. I think they are going for an Alien Bees-esque vibe, to appeal to the entry-level end of the market.

Some users may not be so keen on the umbrella holder, which works on friction aloneâ€”there is no tightening screw. It feels quite snug with the umbrellas I tried, but if you had some kind of giant parabolic umbrella pointing directly upwards, perhaps it might slip eventually. The position of the holder is just right for allowing the shaft of a brolly to clear the edge of the standard reflector, if you choose to use one.

As a single-colour, daylight-balanced light there are only three electronic controls: a dimmer, a ‘battery life button’ (more on that in a sec) and a power switch. The dimmer is a analogue dial that always remembers your last power setting.

The promotional literature describes the Badger Beam is ‘stepless’ but this isn’t quite true: you have 99 discrete power levels, from 100% to 1%, and it is not a smooth, continuous transition from one power level to another as you turn the dial â€” something worth noting if you wanted to dim the light as a visual effect during a video. Once the power level is set, there is no flickering, however. 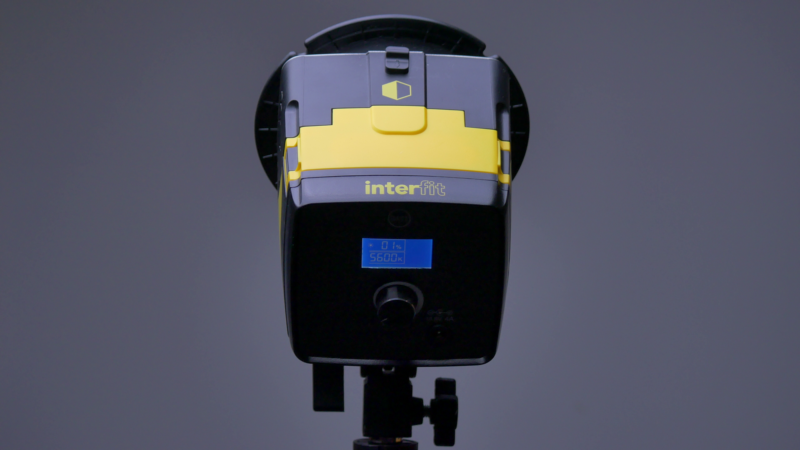 Battery level is only displayed while you are holding down the ‘battery life button’, which is really rather an irritating design choice, not least because the indicator isn’t even that granular: it is just a four-bar icon, as opposed to a percentage or estimated minutes of runtime. Battery life is pretty good: the manufacturer specifies 45 minutes at full power, which is enough to last the length of a shoot, and because you can access it with a flick of a switch, is convenient to use even indoors just if you can’t be bothered plugging in the mains cable.

Extra batteries are Â£60 (or Â£48 on sale), which is maybe slightly more than I’d like to pay for a 2900mAh battery that only works with two models of light (this and the Badger Unleashed), but it is a very streamlined solution. If I were using this long-term, I’d probably just use the included battery and keep it topped up, rather than buy a spare. The mains adapter puts out 16.8V DC at 4A via barrel plug, so theoretically you could DIY a V-mount (or 2Ã—NP-F) battery adapter to extend the runtime of the light.

To turn the light off completely, you use the mode switch, which has settings for ‘AC’, ‘Off’ and ‘DC’, according to whether you want to run the light from the mains adapter or the battery. Don’t switch between AC and DC modes too quickly or you’ll encounter a bug in the firmware, where the LED doesn’t light up and the battery indicator blinks. (At least I think it’s a bug: I am checking with Interfit.) To resolve it, simply switch the light off for half a second before selecting the desired power mode.

As soon as you turn the Interfit Badger Beam, the active cooling fan whirs into life. It’s not the noisest fan in the world but it’s not silent, either. It runs at a constant speed (and volume) regardless of the power setting or whether you are running it from the battery and the mains. An unscientific reading on my phone indicated about 21dB with the microphone right next to the light (compared to an ambient level in the room of about 9dB). It’ll definitely get picked up by your microphone if the light is less than 2â€“3 metres away, but because it’s constant, it’s trivial to remove in audio editing software.

Output of the light is good, with no noticeable colour cast, flickering or inconsistency. I measured f/5.0 at 1 metre, Iso-200, 1/60 second, with the light completely bare; this increases by one stop with the included standard reflector, and decreases by one stop with the double-diffused 24″ pop-up softbox (measuring one metre from the front of the softbox). As mentioned already: this is just the lower limit of usable, if you don’t mind using wide apertures or higher Iso sensitivities for shooting stills and video of wider scenes. For headshots, interviews and tabletop work, it is perfect, but if you are working against bright ambient lighting then you might want to get a more powerful lamp.

Stills photographers needing noise-free and blur-free images might be better off with a studio flash at this price point, but if just creating images for the web (e.g. product photography for eBay listings) then a continuous lamp like the Badger Beam is an easier light for beginners to master, especially if you’re just using a cameraphone.

For comparison, the competing Godox SLB60 is around Â£280, though it has a remote control and the Interfit doesn’t. Another product worth considering is the Jinbei EFII-60W (aka Pixapro COB60D), which uses the de-facto standard Sony NP-F type batteries, and is priced roughly the same as the Badger Beam (once you add the cost of the batteries, sold separately). The new Godox ML60 is around Â£250 (excluding batteries and remote) and more compact, using the small Godox-fit accessory mount, and offers a silent running mode.

If you don’t need battery power and want to save a bit of money, then it’s also worth pointing out Interfit makes a cheaper mains-only 100W light called LM8.

As an entry-level or budget-focussed option, the Interfit Badger Beam has a lot to recommend it. Compatible with a wide range of modifiers, and ready to use straight out of the box, it has simple controls, and freedom from the mains when you need it. It’s a great option for a home studio or occasional location shooter. It isn’t the quietest, or the brightest, but at this price point you aren’t likely to find many things better.

Longer-term, some photographers might find the lack of a remote control slightly limiting, and the proprietary battery can’t be shared with other lights. If you frequently depend on the battery rather than just using it as a convenience, you might want to look at something that natively uses NP-F or V-mount batteries, to get more shooting time.

Thanks to Interfit UK for lending me a demo unit to review. The Interfit Badger Beam is available now for $199.99/Â£199.99 from interfitphoto.co.uk or Amazon.