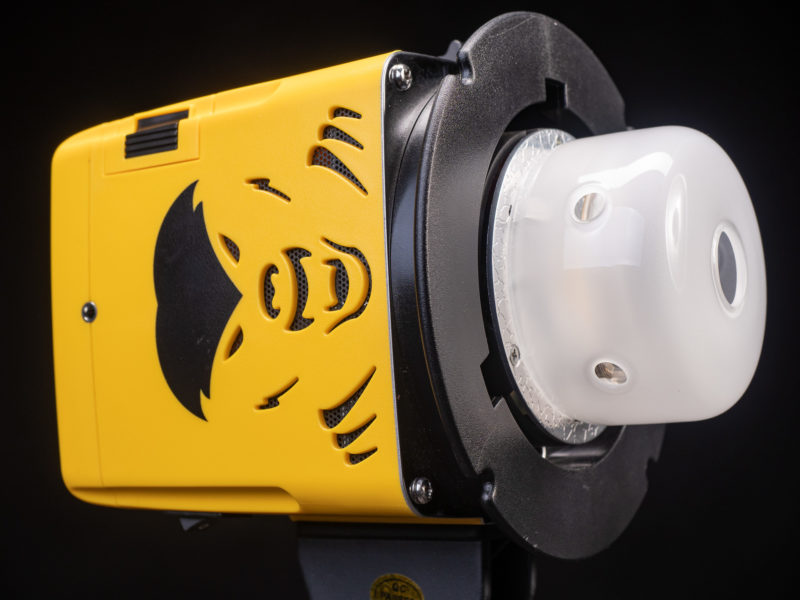 When the 250Ws Interfit Badger Unleashed arrived, I carefully unboxed it, and examined it for a few minutes. It’s a cube. Initially, this kinda struck me as odd, but I confess I believe it may be a cultural thing. Interfit originates in the States, and we’ve seen a few cube-like studio heads come across the pond. I own no other heads with similar dimensions, so it certainly stuck out when placed amongst my other gear. Okay, it may well have been down to the vivid yellow colour too, but I tell you what, it was dead easy to spot in a busy studio, or out on location. And the cube dimensions? Maybe not so odd after all. It slotted into my kit bags without issue, and the prominent â€œSâ€ fit collar had a trick up its sleeve, which I’ll come to later. 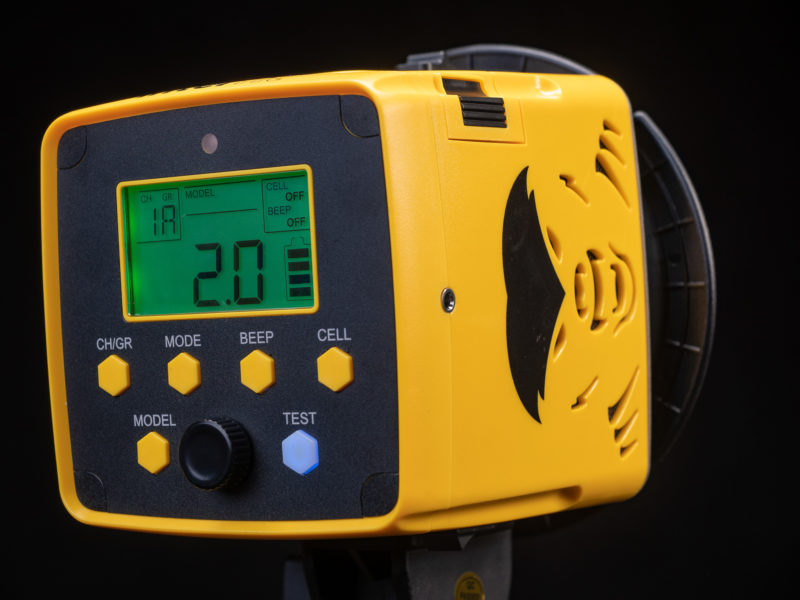 Moving around to the back, we have a rather large display. The power setting can be seen easily from quite a distance away. The controls are clearly labelled and easy to understand. In fact I found the manual to be superfluous. The external sync jack can be seen on the side, and takes a standard 3mm sync jack. This will allow third party triggers such as Skyports, Pocket Wizards etc to fire the Badger, albeit on a manual setting, and with no adjustment from the camera. Obviously, piggy backing the Interfit trigger from your third party receiver will negate the need to use the sync socket, and will let you adjust the Badger remotely if you have the piggy back pair to hand. This is often the way I used it in the studio.

Currently, Interfit have TTL triggers for the Badger that are compatible with Canon, Nikon and Sony. As an Olympus and Fuji user, I was having to use it in manual mode with the supplied Canon trigger, but it would be nice to know if a Fuji or Olympus TTL trigger was in the works. (Maybe the 2nd generation TTL transmitters, due out in 2019?) 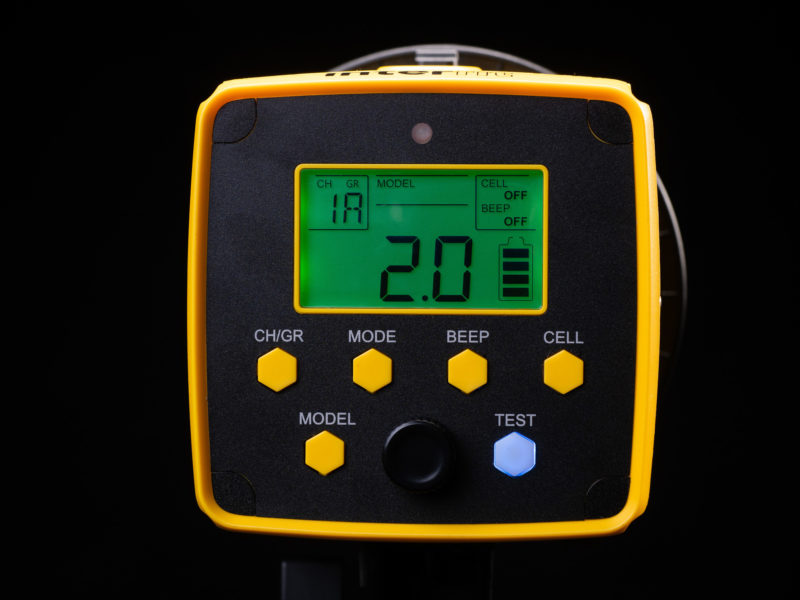 See the small dot above the display? That’s the cell sensor. I must admit, the size of it bothered me. Surely it’s too small, and probably a little deep, given the vinyl type covering of the back panel. I was concerned it may be shrouded, and therefore not really that sensitive to being triggered by other lights. I needn’t have worried, as it proved to be a better sensor than some of my other studio heads. 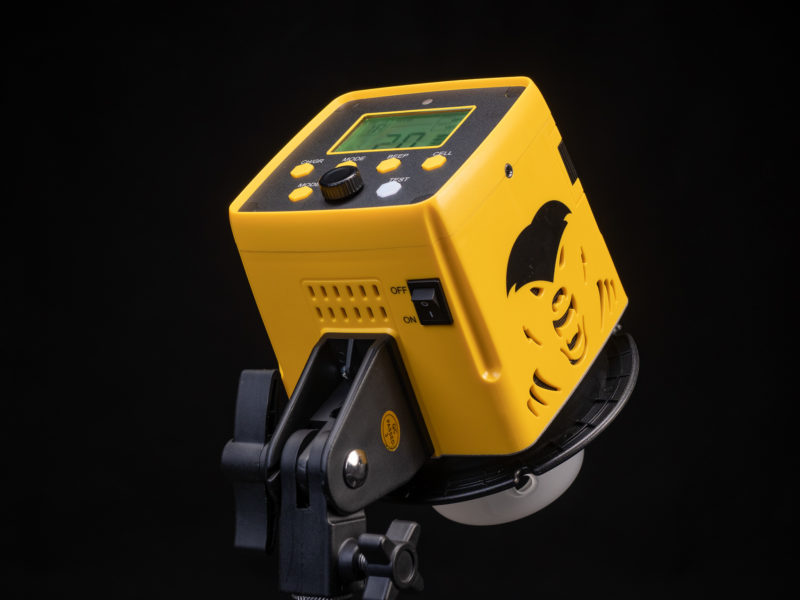 The on / off switch is underneath the body. Out of the way, and unlikely to be turned on or off by accident.

The battery drops in from the top. Now, it may look quite small as far as location monobloc batteries go, but don’t let that fool you. You get 430 full power flashes out of a single full charge, which is damned good. My only gripe here is the fact the battery must be removed to be charged, and I don’t see any way a â€œcharge while you workâ€ option can be introduced at a later date, due to the external charge procedure used now. Obviously, Interfit could always introduce an AC drop in dummy battery for studio use (Are you reading this, Interfit?), and that would at least open up a wider use for the head with heavy duty studio sessions.

There are a number of things that really hooked me with the Badger Unleashed. The fact it has nine stops of adjustment, taking it right down to just 1Ws of output is a real boon. Especially when shooting really close, such as macro, or even food. Passive cooling meant it was silent, and the term â€œpassiveâ€ gave me a little concern of possible over heating. But hand on heart, I can say I never had an issue, even when using it quite heavily in the studio. The modelling lamp has a couple of levels of output, and isn’t a smooth adjustment from off through to full. And on full, it’s certainly bright. I’m not one to bother with modelling lights, to be honest, but I can see the modelling light being of use to those who occasionally use video too.

Recycle time of 1.5 secs at full output is quite respectable, and that time drops as the power is turned down.

The frosted dome is a nice touch. It aids in the dispersion of the light and helps fill modifiers a little more efficiently. Not to mention the fact, it protects the bulb too. 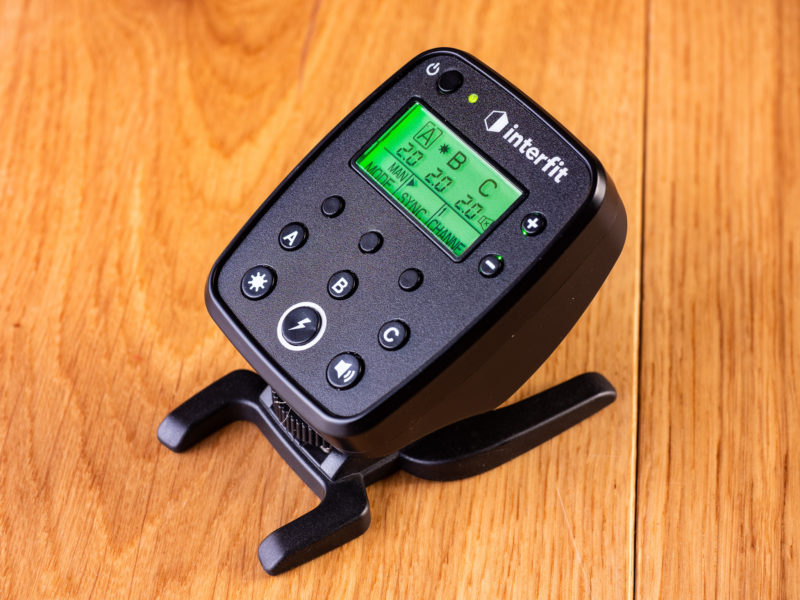 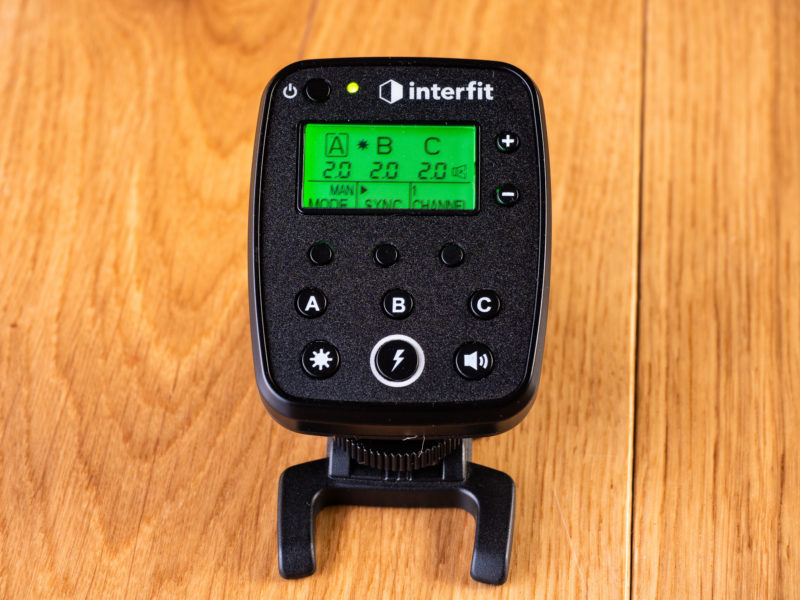 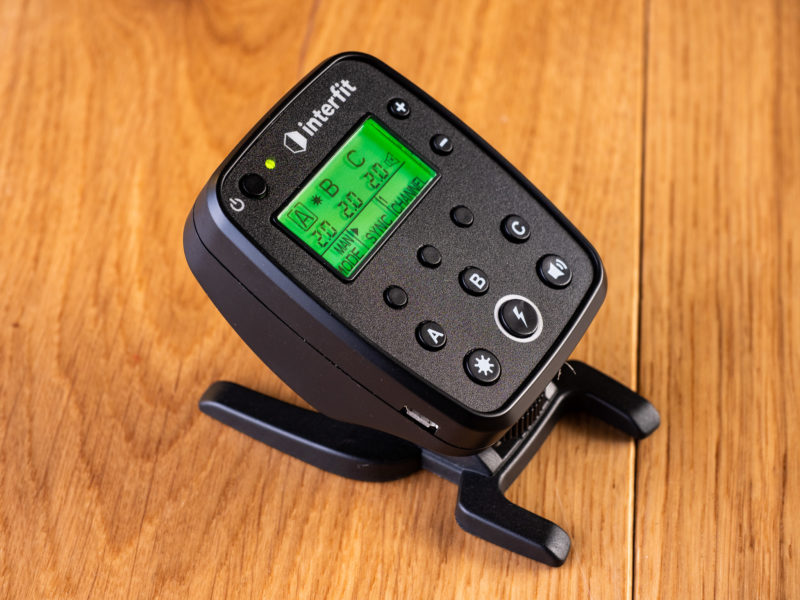 The supplied transmitter was the Canon version. I opted for that, as I knew I could rob a Canon camera from a friend, allowing me to test the TTL capabilities. This is the current TTL trigger, available in Canon, Nikon and Sony flavours, with a mkII version scheduled for release in 2019. The current TTL trigger caters for three groups, with a nice clear display, and straightforward controls. Again, just a minute or two of prodding the buttons will quickly get you acclimatised and off you go. It’s very intuitive. The angle of the hotshoe mount makes it nicely readable as you lower the camera, rather than having to tilt the camera to avoid reflections on the screen. Switching from TTL to manual is a breeze.

The first thing to do was to check the output. The lightmeter was set to an ISO of 200 and placed at a distance of 1m from the the head, which was firing through a standard 18cm reflector.

There’s a tiny amount of deviation in output value as the power is adjusted, although it’s insufficient to see any real world effect.

Now, I’m not particularly enamoured with TTL shooting, as I prefer a manual setup for complete control with consistent and repeatable results. However, I do understand and appreciate the value of TTL in extremely quick moving scenarios, or where there’s next to no time to configure a manual setting. Having TTL also provides a familiar path for those wanting to move beyond speedlights.

So, how well does the TTL perform? It’s a very simply answer : Beautifully!

This was a deliberate very quick popup and shoot. No metering.

A 120 × 80cm softbox frame right, just out of frame. A silver reflector frame left, quite high and angled towards Damien’s temple. Transmitter switched to TTL and fire.

The intention was to take just one shot. No test shot or metering. Just fire and go, basically mimicking a scenario with little to no time for faffing!

Very happy with the image above, which is a vanilla raw conversion in Lightroom, no adjustments.

An interesting observation. Use TTL on speedlights or most studio / location heads, and you simply get a readout on the display showing TTL, and any flash compensation that’s been dialled in. The Badger Unleashed has a really nice touch. It shows TTL on the transmitter, but the head itself shows the actual power output used. This makes it extremely simple to grab a quick TTL shot, as above, and then switch to manual for finer tuning. Nice! 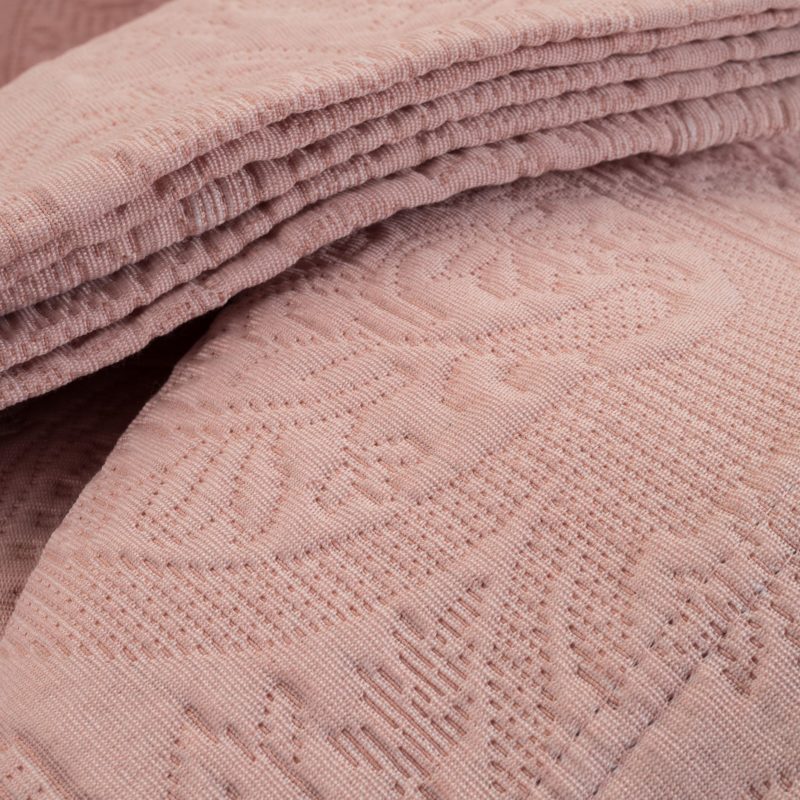 The first client outing was a textile shoot. Really nice colour rendition, and it played well with my studio heads. My studio heads are a mix of IGBT and voltage controlled heads, with colour temperature being an extremely important factor. I ran a couple of test images to check against my usual heads, and found very little drift, even when turning the Badger quite low. 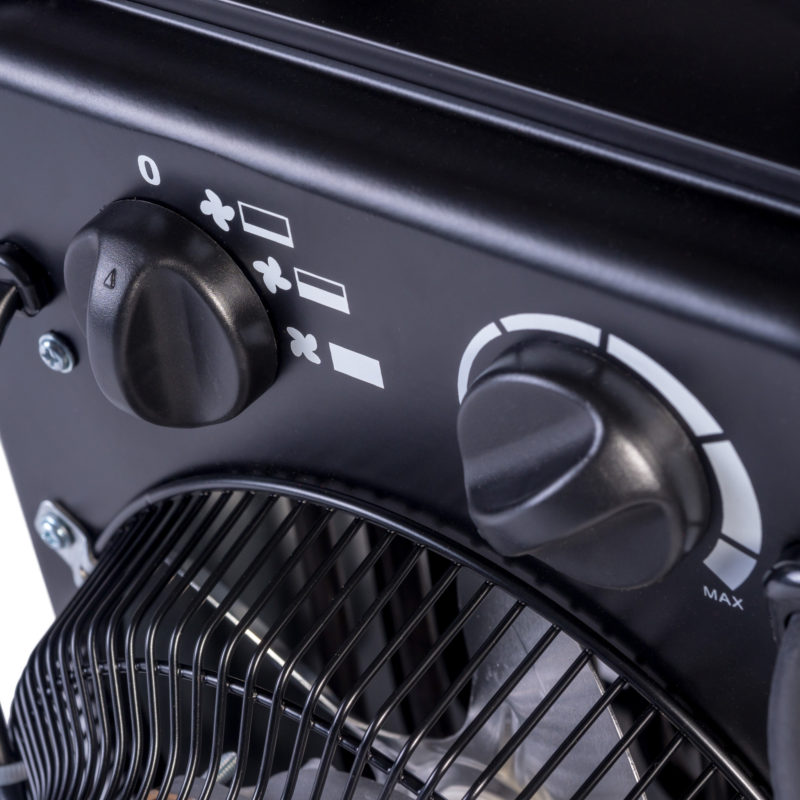 Close up work, such as the above image, was extremely well suited to the Badger, due to the very low output it can be dialled down to. I own a number of older higher powered heads that cannot be used for close up work at all. 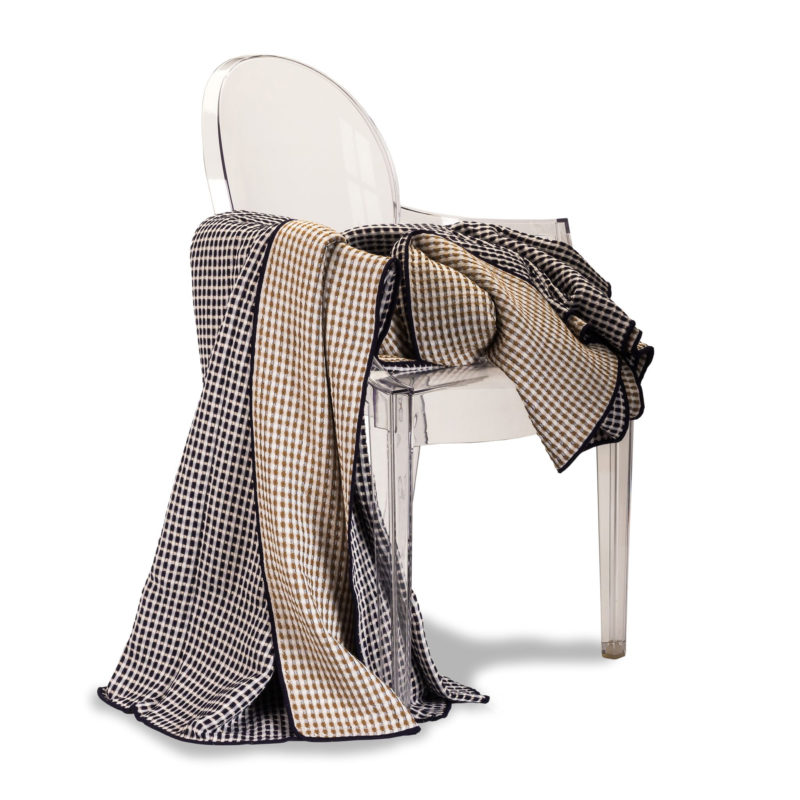 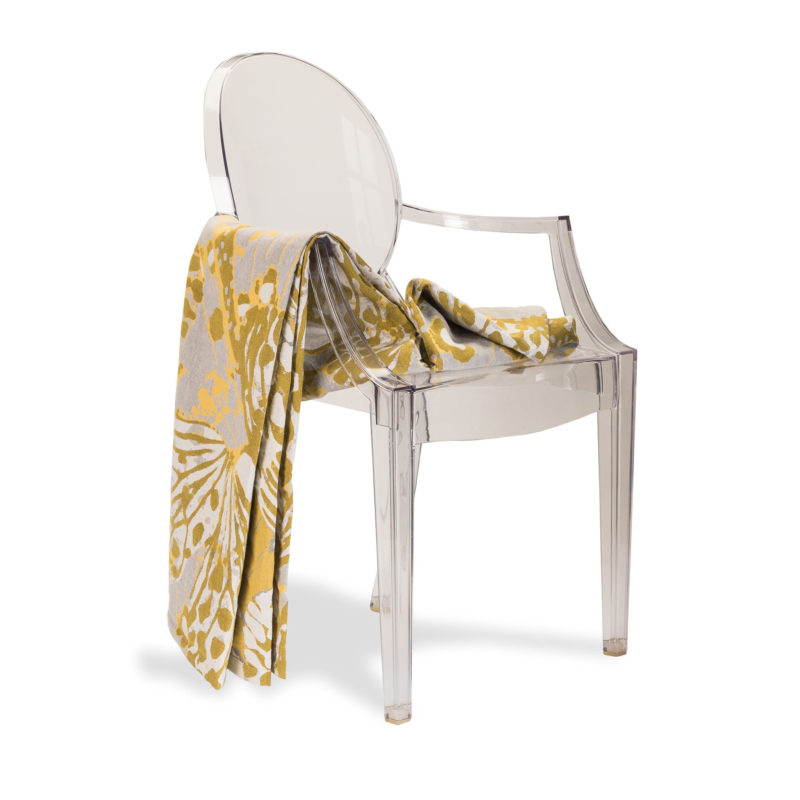 The â€œSâ€ fit modifier mount, allows for a vast choice of modifiers, from budget, right through to the most expensive you can possibly afford. As a test, I ran the Badger through an extremely large Calumet 72â€ box. Absolutely no issue filling it, and the lightstand mount handled the torque created by the large softbox without any kind of problem. The stand mount has a ratchet system, which locks very securely. 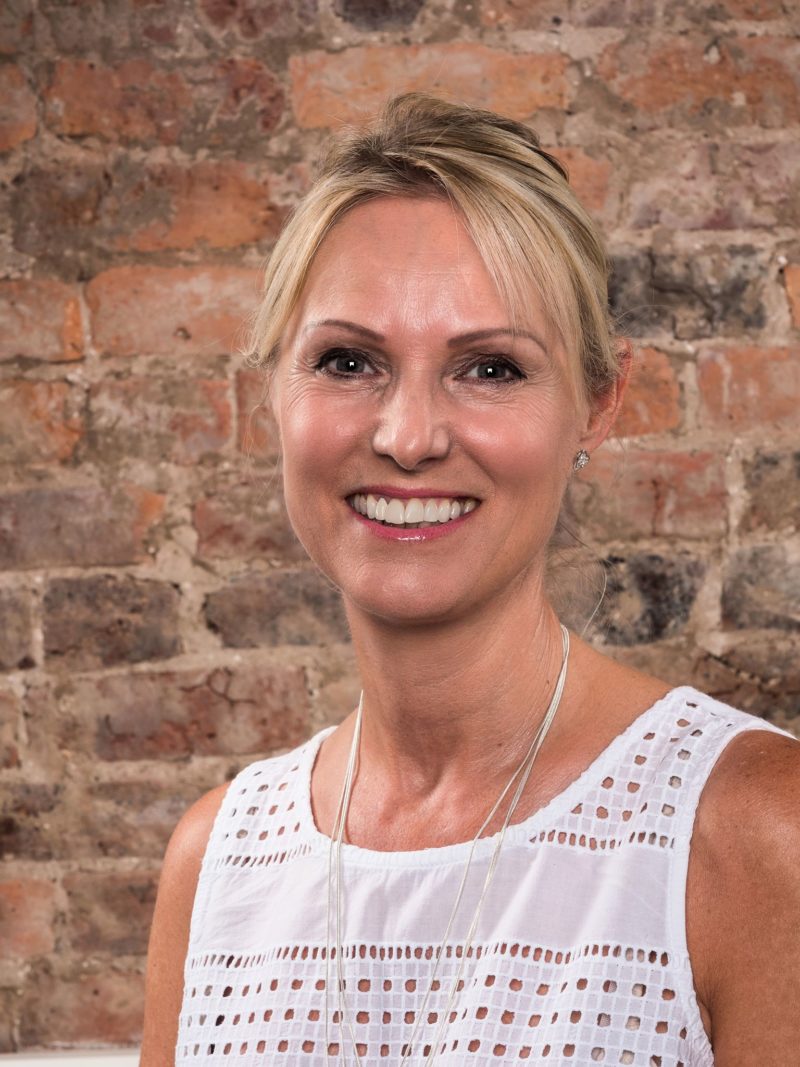 The Badger is ideally suited to headshots on location. Nice and quick to set up, and a TTL shot to get an idea of the ballpark I should be playing in, and then switch to manual.
Easy Peasy!

Remember I mentioned right at the start, that the large â€œSâ€ fit mount had a trick up its sleeve? Well, the large outer ring is the correct size to fit those many folding softboxes that are available which normally require a metal mount. The Badger fits straight onto the ‘box, no problem, and is extremely secure. The glass dome provides protection to the flash tube, which is great when faffing about in a semi lit client area, when trying to poke the bulb through the rear of a folding box. I use several folding type softboxes in my location work, and not having to carry the mount adaptors would make a nice weight / space saving.

The above image was taken with a folding 80× 80cm ‘box and a couple of stripboxes. 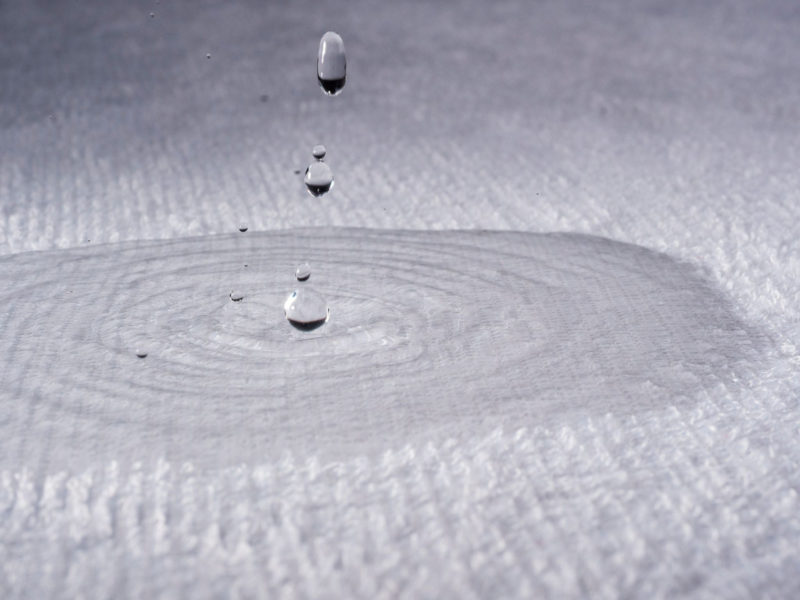 Part of a textile shoot, and designed to show the waterproof abilities of a mattress cover. Turning the Badger down reduces the flash duration, effectively freezing the motion of the water droplets. Again, being able to turn it much lower than some of my other studio heads, meant it could be placed much nearer. 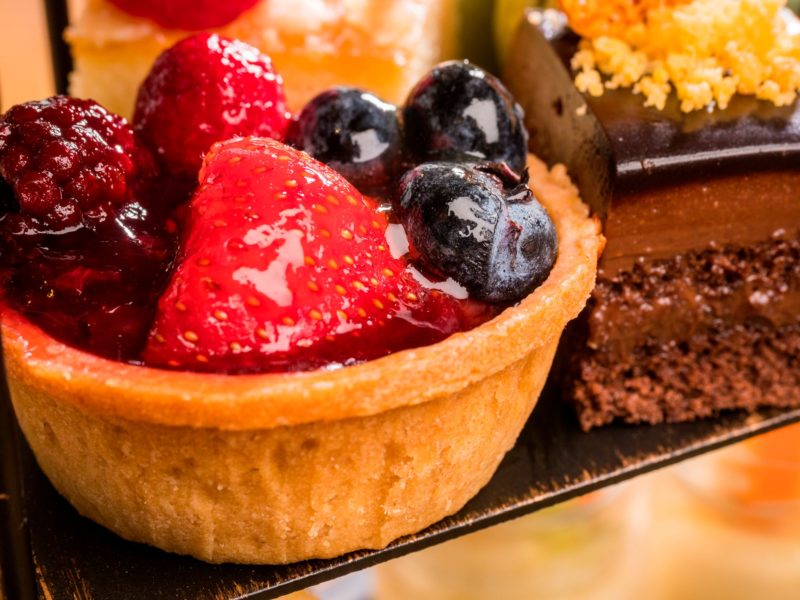 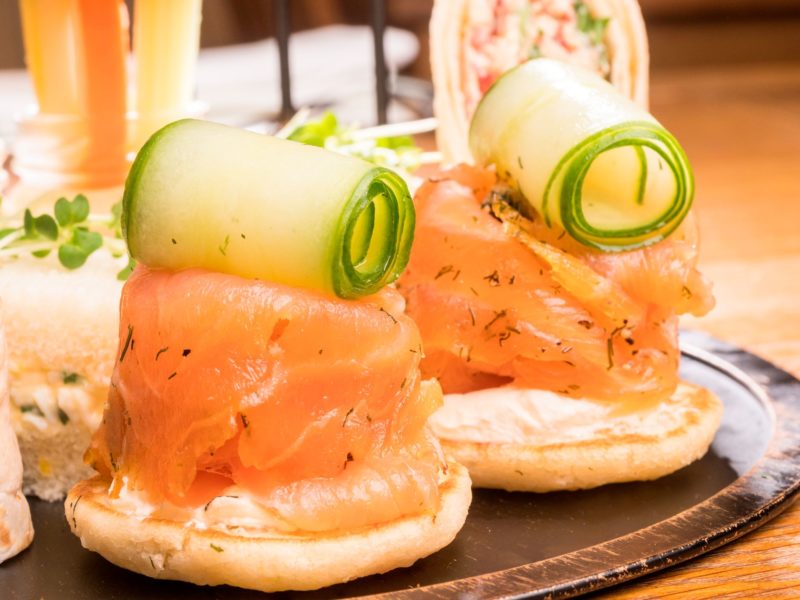 Food photography is another area where a lower power output is an absolute boon. Lights tend to be quite close, and I prefer to shoot pretty close to the food. A shallow depth of field allows me to isolate a particular part of the food, drawing the eye of the viewer. The Badger seemed ideally suited for food work, and this is another area I use folding softboxes. 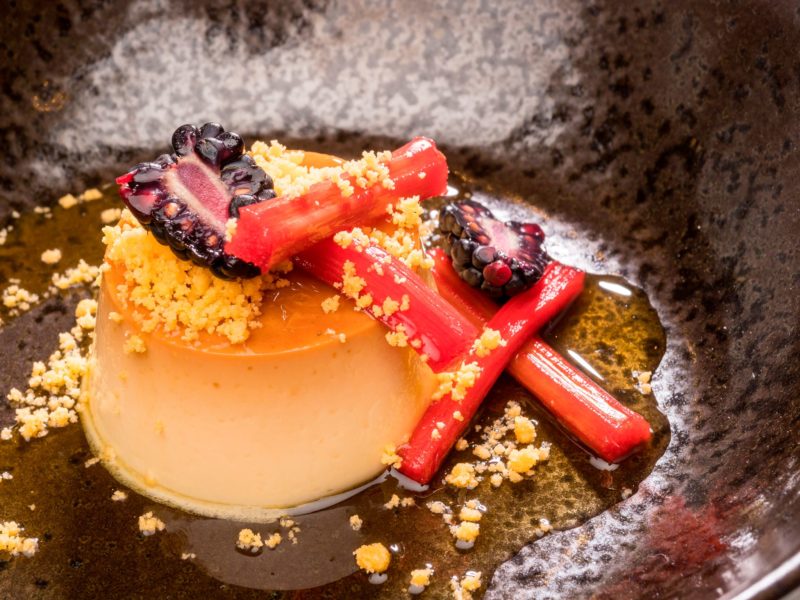 More of the food imagery.

I wasn’t particularly looking for another head. I wouldn’t have chosen a cube like head if I’d been looking, either. I wouldn’t consider yellow as being my colour. Kinda bright, innit!

The cube like shape is functional, and is really nicely balanced on a lightstand. The tilt mechanism is very positive, and ratchet within the locking mechanism holds even the largest of softboxes rock steady. The broad modifier mount, allowing the direct fitting of folding softboxes is a nice touch, and to be perfectly honest, caused me to reach for the Badger over my usual location heads for that very reason. It just made setting up that little bit quicker.

And whilst I hate to admit it, I find the bright yellow to be very helpful when keeping track of heads when working on a busy location.

The remote is a doddle to use, as is the interface on the unit itself, with a really clear, large display. The cell is certainly one of the better ones I’ve used, and has a much wider â€œviewâ€ than anticipated.

For such a small and compact unit, you get a lot for your money.