Shooting on location with system flashes? Interfit have announced a pair of new folding softboxes specially designed for use with speedlights. Adding to the company’s Strobies range of hotshoe flash accessories, the Rapida 8 Octobox and Rapida Stripbox are meant to be small enough to carry to your photoshoots while being large enough to produce soft light for portraiture.

Traditional softboxes can take a long time to assemble as you thread poles through fabric in the same way as erecting a tent. Other quick-folding modifiers work like umbrellas (and are equally prone to breaking on windy days) or a pop-up tent (which can be maddening difficult to fold away).

However, the Rapida range has a different design. It’s effectively a fully-assembled softbox, which opens up on sprung hinges. Assuming the mechanisms are built to a good standard, this could prove to be a good compromise between foolproof set-up and durability.

The Strobies Rapida 8 is an octagonal softbox measuring 18″ (47cm) across. The mounting bracket will tilt the modifier back and forth while supported by a light stand or boom arm. A speedlight sits on a coldshoe that slides back and forth on the bracket to poke the flashgun’s cobra head into the softbox.

The Rapida Stripbox measures 23 * 11 inches (58 * 28cm) and is set up in a similar manner to the Rapida 8. Unfortunately, you might find yourself stuck with the rectangle in a “tall” orientation, because it doesn’t look like the speedring can rotate relative to the flash head. However, the portrait strip shape is commonly used for rim lighting and in studio setups. 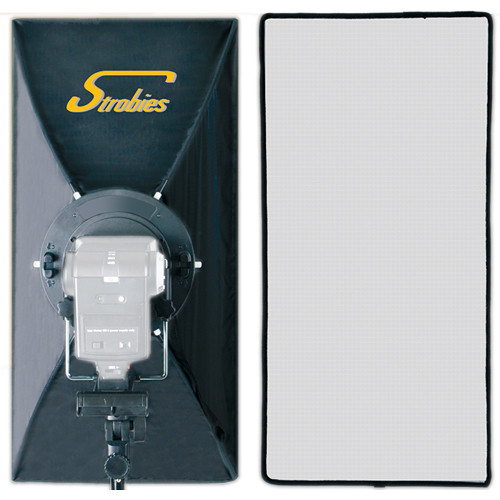 The new Strobies softboxes are now available to order from B&H Photo. Both models cost US$159.99 but do not appear to be in stock yet. The Rapida series will be going up against the Aurora Firefly Beauty Boxes, which have similar dimensions and price but utilise a slightly different folding design.

Do these products pique your interest? Share your thoughts.