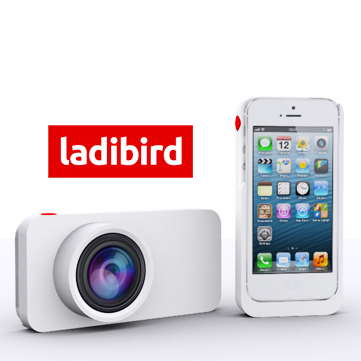 We got the opportunity to talk to the people behind Ladibird, a 50mm f/1.8 portrait lens adapter for the iPhone 5. The product â€” a case that entirely replaces the phone’s camera with a larger grip, lens and sensor â€” has just recently been successfully crowd-funded on Indiegogo, raising nearly US$25,000.

But with other recently-announced gadgets such as the Sony QX10 and iPhone 5S on the way, can customers be sure they’ve backed the right horse?Â Ladibird founder Alex Latip, based in Singapore, reckons so. He answered a few of our questions about the project. 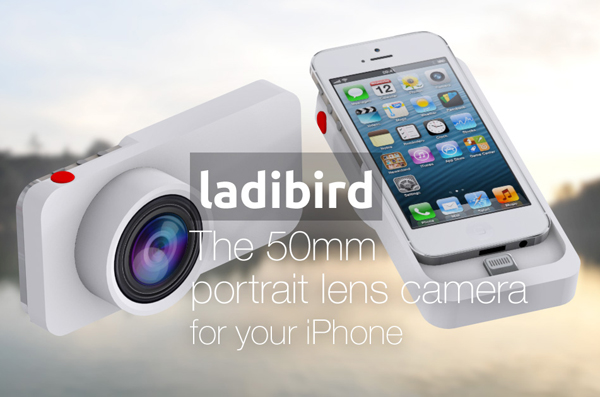 What specifications can you confirm right now?

Whence did you get the lens and sensor?

As mentioned in our FAQ, these are sensitive and we do not wish to breach the agreements we have with our manufacturers and need to keep this matter private. A camera is more than just a sensor and lens: they are several chips which come from many companies all over the world.

So far we’ve only seen 3-D renders. When will we see pictures of a prototype?

The prototype will be shown first to our “early birds”, who are the first 100 to pre-order on our Indiegogo. Out of these 100, 61 live in Hong Kong, Taipei and Singapore. Our intention is to let these 61 people see and beta-test the first few prototypes and give us feedback before we go for mass production. We are quite fortunate as these people represent our key audience â€” we are building for them. They also geographically close, thus we can afford to spend part of our budget to interact with them directly. If we can, there are a few more areas we would like to reach out as well.

So far you’ve only supplied photos taken with a DSLR in 2009. When can we see some actual sample images?

We can show sample images most likely in early Q1 2014. ladibird is a long-term project: there is still one aspect of photography which most people ignore which we need to produce so that you can get close to what was shot in 2009.

Who do you think will buy Ladibird and what will they use it for?

Actually, this is quite an interesting question. We are conducting a bi-monthly Surveymonkey to get a better profile of the people who support ladibird. Based on our completed Indiegogo records, they are mostly (above 90%) male and are photo enthusiasts and/or work with the visual medium in areas such as photography or video production. We intend to slowly build a profile of our ladibirds [backers] over time, to understand their habits.

How pocketable is it?

We would prefer to call ladibird “pouchable” or “baggable”. It is certainly not pocketable, in terms of garment pockets. But, it will definitely slip in a handbag, sling-bag, waist pouch, etc.

What kind of accessories might we see for the Ladibird?

Sony recently announced their own take on this format, the QX10 and QX100. Unlike the Ladibird, they are wireless and meant to work with multiple models of handset. How do you think the Ladibird compares? Can it compete?

In reality, Sony has a very broad strategy of encompassing all handphones. Samsung went the opposite direction and integrated a wireless LTE chip into DSLR cameras, starting the Galaxy NX camera. However, all of us look to achieve the same goal: instant, high-quality, mobile-driven photography, which is the logical 10-year evolution of cameras ever since digital consumer cameras entered the market in 2003, with 3.1 megapixel cameras starting to replace traditional film cameras [and, in turn] succeeded in 2007 by smartphone cameras.

What we believe is that instead of looking at the entire camera market as a competitive space, each of us is addressing the needs of very different customer segments â€” and for ladibird, we are simply serving a very unique customer segment.

You say you will be “supporting future iPhone models”. What if the next one doesn’t fit?

The iPhone form factor of 5S & 5C are almost identical to iPhone 5, thus we do not have a problem for now.Â Most consumers buy on 2-year contract, thus our first ladibird will have a product cycle as well. So the real challenge lies with iPhone 6. We can’t comment on our plans for it at this moment.

What’s to say that each Indiegogo backer who owns an iPhone 5 now (and backed the project) will still have it in June 2014?

They have committed money to get a product which depends on owning an iPhone, thus, it is quite illogical for anyone who bought a ladibird not to have an iPhone by June 2014 [the estimated Ladibird launch date]. However in the event they no longer wish to own an iPhone by the time we deliver the ladibird, we will ask them what they wish to do with their contribution.

Will it eventually be available for retail, in stores?

At our stage now, this is a very difficult question. As a small outfit, to reach retail stores is difficult and actually increases the price of the ladibird. If we were to hit retail, we would have to begin in key locations. We already have a few areas in mind, thanks to all the feedback we got, but for now, we will focus on the next stage: the 2nd ladibird Indiegogo. We will have a better idea of whether to go retail after that.

The Indiegogo campaign for the Ladibird is now finished, having raised $24,660 of the $20k goal. The estimated release date is next summer. For more information, visit ladibird.com.