A revolutionary concept from Rift Labs will allow an LED lamp to “stream light” from a video via WiFi. Rift, a US-based start-up, is developing the Kick Light as an affordable mass-market offshoot from their original project – the Floyd Intelligent Light. 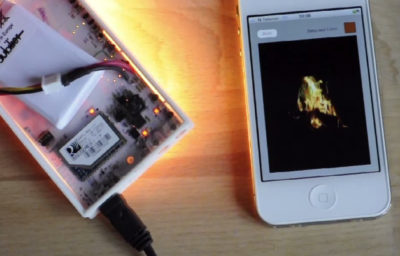 Using a dedicatedÂ iPhone app, users can remotely tell the Kick Light to match any single colour they choose, or to recreate the colours continuously from a video played in real time. Thus, photographers and film-makers can recreate fire without lighting any candles, simulate the glow from a television screen without one to hand, or any of a whole host of other creative possibilities.

Confused? You may need to see it to believe it. Rift’s Morten Hjerde demonstrates the concept using a prototype in the following video.

The Kick Light – still in development – will be no larger than a smartphone and charged via USB. The company plan for it to be “an independent light source” to complement stills and video capture on any cameraphone or digital camera. The firm say the Kick will be “inexpensive” but we haven’t been told what the retail price will be yet.

To find out more about Rift Labs, visit their web site.