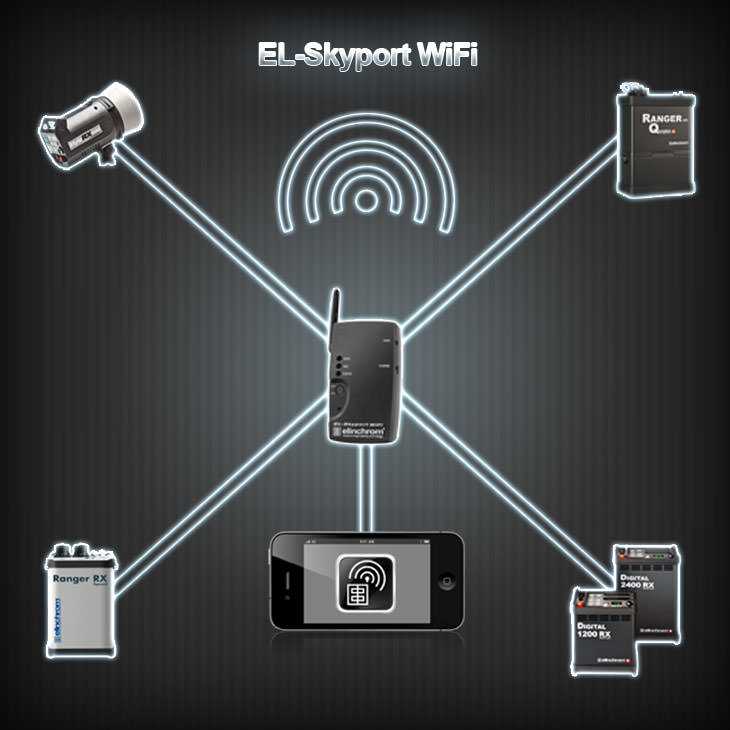 Will WiFi-controlled studio lighting ever become standard?Â As we hurtle into 2014, consumer electronics are increasingly connected, either to the internet or each other. Photography manufacturers are finally starting to follow, with WiFi and NFC now built into new “smart” cameras. Framing or sharing photos wirelessly through your phone is easier than ever.

The lighting industry is a bit slower to catch on, still clinging to a plethora of proprietary standards, especially when it comes to flash triggering. But there are some smart photography lights that you can control with an iPhone. Here are some I’ve found.

Korean manufacturer Rime Lite is currently making the rest of the studio lighting industry look bad with their XB WiFi system. It is just one of myriad ways you can control their XB Prime series of professional-grade studio flashes in addition to a handheld remote, PC software and direct input. 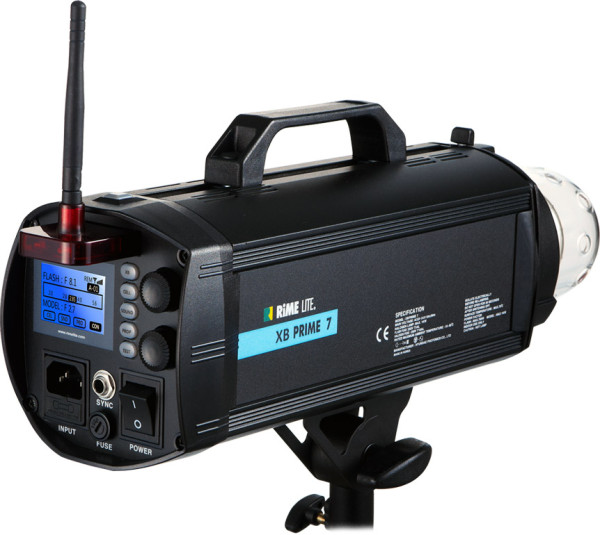 There is an iPhone and iPad app giving full control over flash and modelling lamp power settings, either for your whole studio or for individual heads. You can adjust lights with 1/10-stop precision and do test pops for the benefit of a flash meter. It’ll even let you switch the optical slave cells and ready beep on and off.

Your iOS device has mastery of a wide range of lights, from the relatively lowly XB Prime 3, to the ludicrously titanic Quadplex studio pack, which puts out a whopping 4800Ws! For a full wireless system you’ll need a 2.4GHz receiver module in your light and a WiFi Converter plugged into your router, plus the official app.Â Overall the control is quite comprehensive, and well-suited for large studios, but the price might put off some enthusiasts. 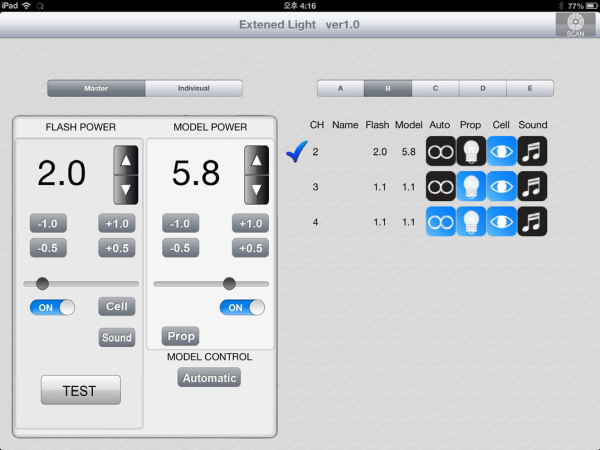 Dynalite distributes the whole Rime Lite catalogue of through Rime Lite USA, though they tend to promote the softboxes more than anything else.Â Visit B&H Photo to browse the range. The UK dealer is Viewfinder Photography.

Find out more at rimelite.com.

Elinchrom offers a system very similar to Rime Lite’s, complementing USB laptop control and conventional radio triggers. Elinchrom’sÂ iPhone app has been a long time coming and isn’t quite as sophisticated as the Rime Lite one, but it is getting there. 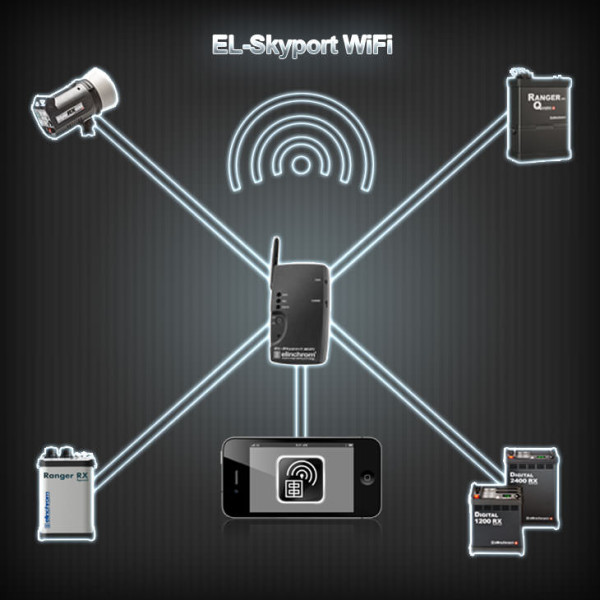 The Skyport app lists your Elinchrom flashes by name and works with all RX-series models, providing precise power control and access to other settings (such as the modelling lamp or slave cell) with a few taps and swipes of your finger.

But even though Skyports, like WiFi, transmit over 2.4GHz, you still need to throw in a $200Â Skyport WiFi moduleÂ to relay the signals to and from your iPhone. Fortunately, it doubles up as a spare radio receiver and has a range of up to 50 metres.

Find out more at elinchrom.com. Buy your module now from Adorama, B&H et al. The app is free.

We’ve already exhausted the list of studio flash systems with iPhone control. Pretty pathetic, eh? Still, professional videographers and some stills shooters can consider this next offering from the continuous lighting sphere. The Rotolight Anova is a bi-colour LED lamp with fine output control, billed as “the world’s first WiFi-equipped light”.

From the back of the light itself, or from your mobile, it is possible to input exact colour temperature and light intensity values. You don’t even have to be on set. It’s $2000 though.Â Find out more at rotolight.comÂ or read our original article.

Think of the Anova, then shrink it right down and launch it on Kickstarter. You’ll get something like the Rift Labs Kick, which has the unique ability to select any colour in the RGB spectrum and live-stream it from a source image or video on your iPhone or iPad. 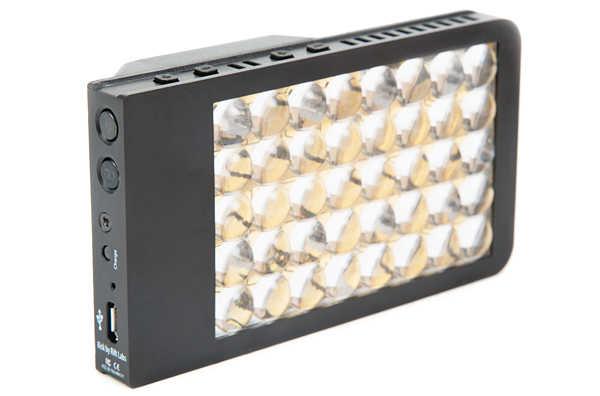 Find out more at riftlabs.com or read our full review here.

A nifty little device, the iBlazr is a light source totally dedicated to your beautifully wireless iPhone or iPad, but has to be plugged in with an old audio cable to work. Easy come, easy go. The tiny LED charges from USB and takes signals from your 3.5mm jack, allowing it to synchronise like a flashgun or work as a continuous video lamp. Adding the audio cable will give you an “off-camera lighting” effect. 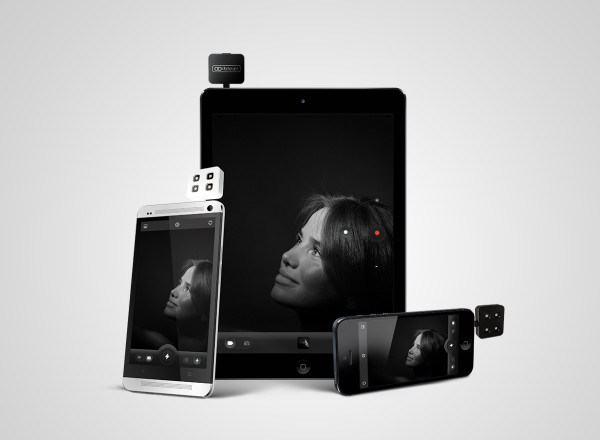 Successfully funded on Kickstarter, you can order an iBlazr now for $49. And it even works with Android devices. Visit iblazr.com for more information.

No relation to the Rotolight Anova (people run out of cosmic names sooner or later) the Nova is a little bit like a cross between the iBlazr and the Kick.

It’s still in pre-production so you can’t get your hands on one just yet, but when it’s finished it’ll be a credit-card sized, slim wireless LED for your iOS or Android camera.Â A dedicated camera app provides the ability to control the LED’s brightness and warmth while taking photos. Pre-order now for $49 from wantnova.com.

So we’ve heard about controlling the light with your iPad, but what if the light source is your iPad? I agree, it’s silly and inefficient. But it does let you control brightness and colour to a certain extent, with some nifty creative modes, so might come in handy as a giant softbox for Lego still-life scenes or maybe even portraits shot at f/0.95. 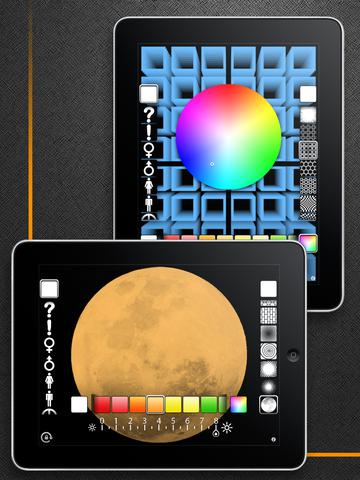 Softbox Pro for iPad is available now for $2.99 from the App Store.

It wouldn’t be the App Store without another app doing almost exactly the same thing! Photo Soft Box Pro HDÂ works for iPads and iPhones and lets you display a variety of shapes and colours on the screen to illuminate your photos. It also has preset white balances listed by Kelvin colour temperature (2000â€“9000K). 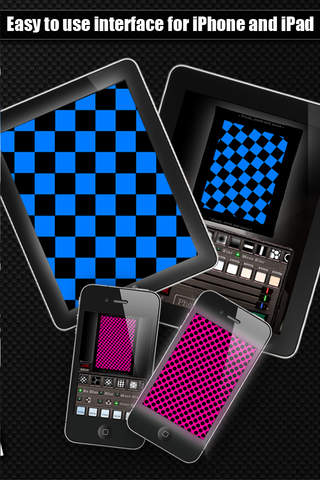 One testimonial says: “It is the most feature rich Soft Box a photographer can buy and one you carry with you anywhere.” If you say so!Â Download it now for Â£1.99 on the App Store.

Mobile, minus the phone…

Sekonicâ€™s Litemaster Pro L-478DR looks a little bit like a smartphone, but isn’t one. It’s actually a touchscreen light meter with built-in PocketWizard transceiver, yours for $399. Maybe the future will see these features replicated by a Galaxy S5 with plug-in Lumu module? 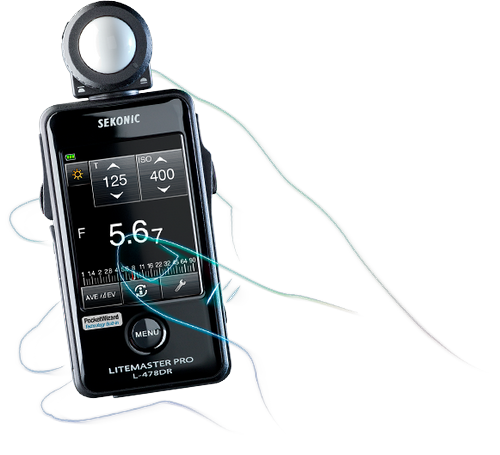 Everything listed above is pretty portable, but LED lighting fixtures in the home also get a look-in, thanks to innovations like the Philips Hue, described as “Personal Wireless Lighting” in standard fittings controllable from your iPhone. It’s like the Kick, but in your house. Suitable for a creative home studio? Pricey at Â£179.95 a set.

So there we have it. Do these systems represent the future of photographic lighting? Would you like your next light to support control from your smartphone? Should Android get a bit more love? Let me know what you think in the comments below.