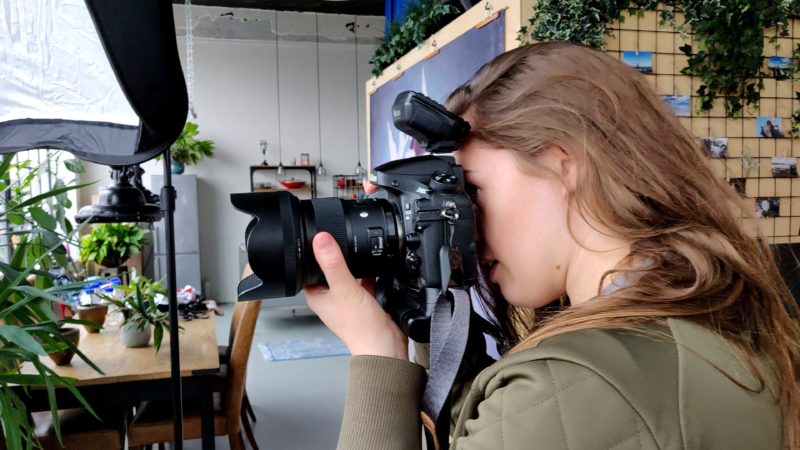 At the risk of stating the obvious, photography has become a lot easier in the last decade. Modern technology makes using cameras more intuitive and accessible, while new innovations allows us to shoot in situations that were not possible before. One misconception is that flash photography has remained very difficult. Back in the day it used to be something for the geeks, armed with flash meters and limited by the length of the sync and power cables. But the world has changed a lot and so has flash photography. Speedlights and strobes have become affordable while digital photography allows us to experiment and learn fast.

A lot of new features now found on speedlights have greatly extended photographers’ creative freedom. It began with wireless triggers, which became smarter with the introduction of features such as TTL and HSS. Lithium ion batteries reduced the size and weight of speedlights and gave of new types of lighting, the size of a speedlight with the power of a studio head. As advanced as modern equipment might be, one thing that is still often forgotten by manufacturers and photographers in the market for new gear are the ergonomics of equipment. How easy and intuitive is it to work with? That is exactly what we will be testing today.

This is the first time that I don’t feel qualified to do the actual testing. With all my experience at Lighting Rumours I am certainly no longer a beginner, so there is not much to learn for me when it comes to flash photography. Therefore I needed someone else, someone without any flash photography knowledge. My idea was to invite a model that I’d worked with before and specifically ask her to bring another model. This other model would become the photographer for the day and I would be her assistant.

In principle I could have done this test with any modern flash trigger that featured TTL and so on, but for in the hope of making the experiment a success I did my best to find a trigger that would be user friendly. I chose to use a Nissin Air 10s, but later on in this article I will discuss a little bit more about the experiences with this trigger. For this test I reached out to Degreef&Partner, the Dutch distributor of Nissin in order to provide me with a set for flashes for my testing and they kindly did so.

For the test I chose to use two flashes, both mounted in light modifiers to diffuse the light. In the end I could have added more flashes if I wanted to, but managing the output of two different flashes would already be tricky enough for the model or better to say photographer of the day. I chose forÂ  softer light since softer light is more forgiving then harder light.

For the camera I opted for a Nikon DSLR since it is one of the cameras I normally shoot with myself. Mirrorless would be even easier since these have features such as eye autofocus. I pre-set the camera with the right focus mode and exposure mode (aperture priority, slight underexposure).

My idea was to give the camera to the fresh photographer and explain her some basic functionality of the camera itself and how to operate the trigger, but stick to the bare minimum. I told her how to focus, take a picture, review the photograph that you just took and adjust the exposure compensation (“if you press this button and rotate this wheel the photo becomes brighter” â€” saying that made me feel like a fool). In less then 60 seconds a full training on the camera. On top of camera instructions I would also give some basic training on how to change the intensity of the flash. I explained her the difference between group A and B and how the change the intensity of each group as well. By far this was the shortest ‘workshop’ I have ever given and at this moment I thought what am I doing to this poor woman.

In the introduction I already mentioned that modern speedlights and strobes have a lot of intelligence build in that can make the job for the photographer easier. TTL metering of flashes, even when they are positioned off-camera have become very accurate and HSS lets the photographer forget about sync speed limitations (which was truly the case in this shoot). 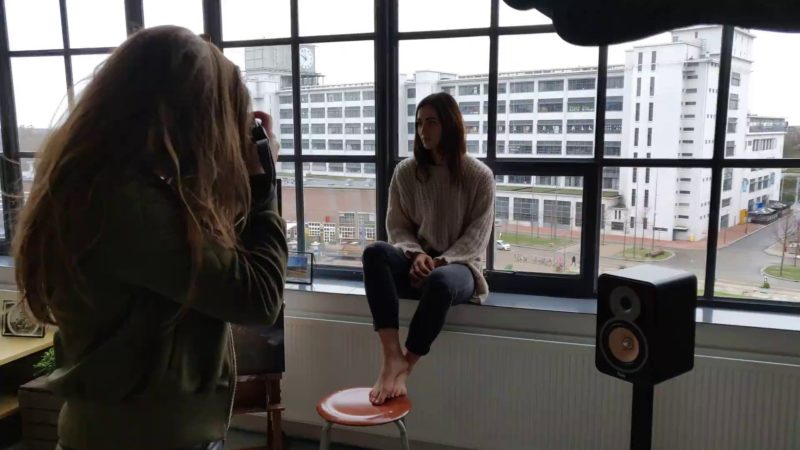 A good example of this are the following photographs. 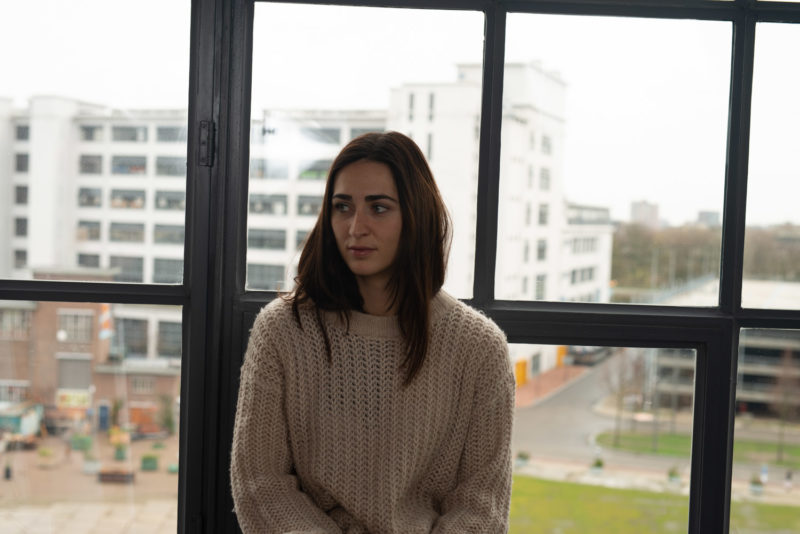 In this first photo we see that the camera exposing for the background and the TTL flash metering is fooled by this. The reaction of the photographer was to increase the overall exposure compensation. 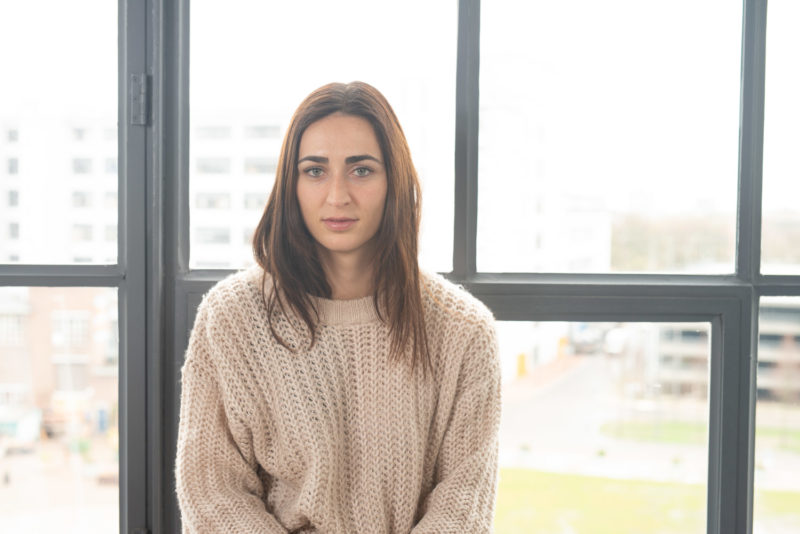 In the next photo we see a much better exposed subject, but because the camera exposure compensation was adjusted and not the flash, the background is a bit blown out which goes well with the style of the photo.

With some adjustments to the pose (with the help of the assistant) the overall result is quite pleasing.

In this series we see that the flash system is taking are of the work of the photographer. The photographer is only telling the camera that there should be more light and everything else is taken care of automatically, such as switching on and off HSS and the intensity of the flash.

When the camera is not pointed towards the window we see that it behaves more much predictably. The more predictable result gives our photographer for the day more room for experimentation, to for instance create less flat light with more visible shadows in the face. When she wanted to do so the power in one of the two groups was dialed down, another test photo was made and further adjustments were made until the desired effect was reached. 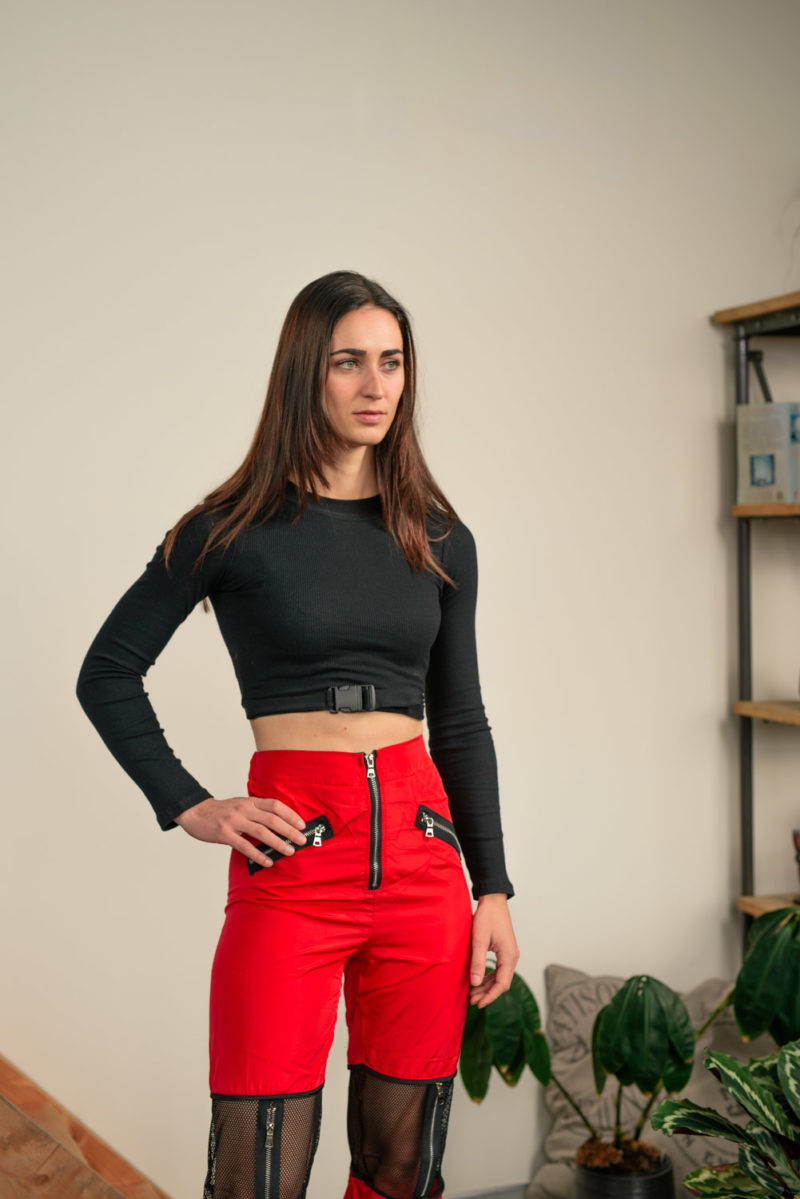 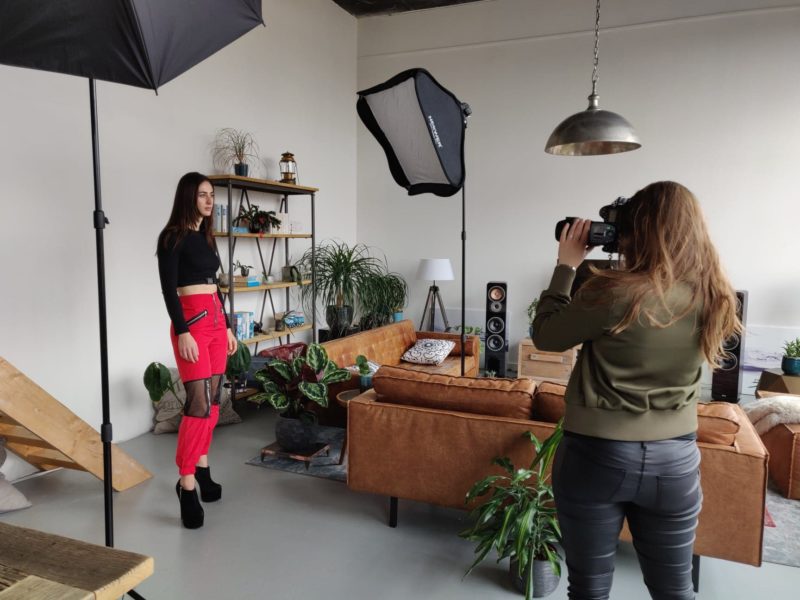 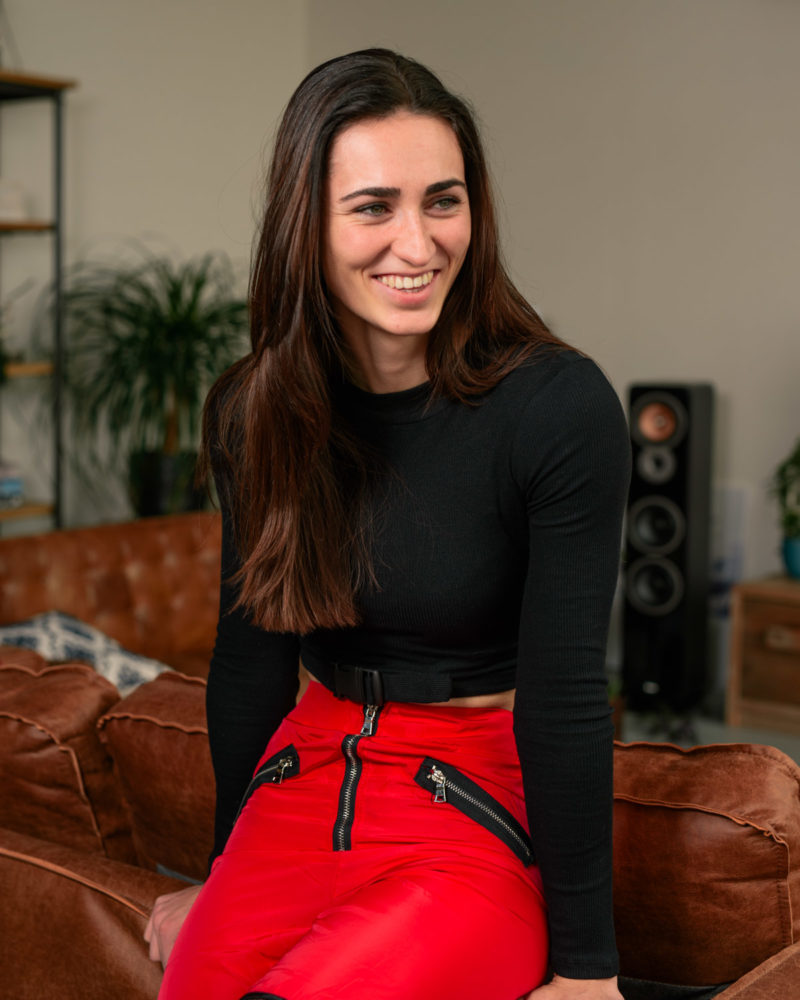 I have to say that I was quite impressed that the lack of photography or lighting knowledge is not a limitation to create photos. And of course I have to also note that she did it not all by herselfâ€”I did help her with presetting the camera and setting up the lights, but with minimal training you can go a long way. I think the results speak for themselves, even if it took more trial and error before this result was reached.

This process of experimenting is made possible because of improved user friendliness of modern equipment. Ten years ago this would have been much more difficult, maybe even not possible at all. Modern cameras and flash systems are much more approachable for beginners and that is fantastic. It allows more and more people to experiment and be creative. Experimentation is essential for the creative process. With failure you learn from your mistakes and understand why some things work better than others.

While with the test we did prove that modern flashes are indeed very easy to use, it is not about how much light you add to a photo but more the way how you do it. During the shoot I also saw that this is exactly where a experienced photographer differentiates himself. A skilled photographer works faster, knows exactly where to position his flash and knows how to balance the ambient and flash light.

Flash photography is about more than just technical specs, it is about how use it. By far this is the most important factor when you want to take great photos. While without TTL, HSS and so on it is still possible to create great photos, but it does take the fun out of it when you have the feeling that it is a fight to get the settings right. Even for experienced photographers this is a very important aspect, since it allows them to focus on what is important and not on the technical part.

I previously mentioned that I chose Nissin as the brand that we featured in this article. I wanted a brand that could that is simple enough to operate but still allows for precise adjustments. I have had good experience with Nissin in the past because their triggers appear simple, are easy to operate and the Air system gives reliable and accurate performance.

Based on this specific shoot and earlier experience with the Air 10s I think Nissin achieved something great. They made flash photography as simple as it can be, but yet it has all the features a professional could want from it. A true beginner can easily use the device without minimal training, but when I use it myself as a professional I don’t feel limited by its functionality. Even for ‘first time’ photographers the process of using it is smooth and without any problems.

Why do I consider Nissin as different from others? Although there are other brands that have good triggers, the Air 10 differs because it has exactly the right mix of information on the display and number of buttons. I am personally a big fan of the way how the Nissin is used, but that said, ergonomics is something very personal so I would advice you to test and feel which system suits you best.

When looking at the results I think it is fair to say that it is amazing what you can achieve with minimal training. Of course there are many things that could have been improved on the photos, but that is exactly why flashes should be easy to operate. It makes the learning curve less steep and therefore it makes flash photography more approachable for more people. Also for professionals modern flash systems can have a significant advantage. Better ergonomics makes the experience more fun and can also save you time during your shoots.

In a way flash photography should not be about comparing the various technical specifications of the systems to each other. As long as they are good you are not going to notice the additional 1% of extra performance, unless you are an extremely demanding photographer. Instead focus on the way how easy it is for you to use this speedlight, trigger or strobe. If it is difficult to operate then there is definitely a chance that it was not designed with the photographer in mind, but instead by a bunch of technicians that have limited photography experience. In my opinion it is unacceptable that modern flashes are not designed around the user experience.

Modern equipment is giving more and more people the possibility to try and experiment with flash. With easy to use triggers manufactures have managed to make it easier to get started with flash, experiment, learn and improve. It makes flash photography more fun, not only for amateurs, but also for professionals. In the end operating a flash system should be obvious to do so, even without reading the manual.