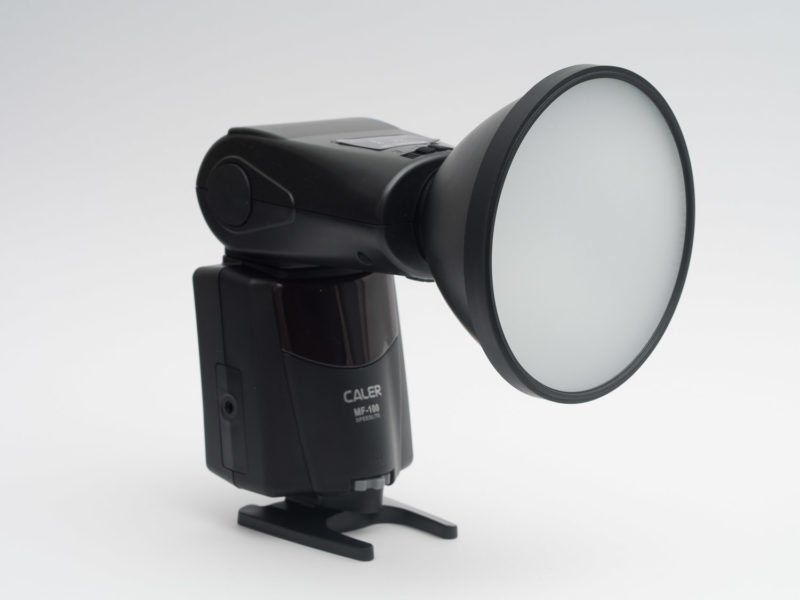 A while ago the Jinbei MF-200 was announced, successor to the MF-100. But what is exactly this MF-100? Available for more than a year now, the MF-100 is the first barebulb flash from Jinbei, the Chinese lighting manufacturer. Similar to the Godox AD180 we have reviewed, it uses an external battery pack and manual power controls. The insane recycling speed is something worth to notice as well: 1.2 seconds at full power. 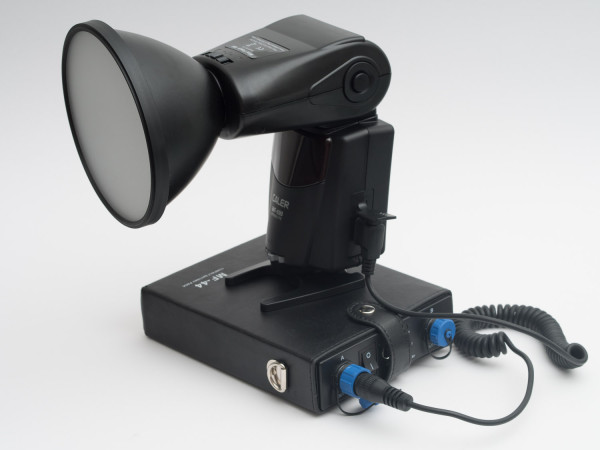 We would like to thank Foto-Morgen for providing us with a sample to review. It has been quite difficult to find a retailer that had one in stock for us to review. This article might be a bit late since the successor is already announced, nonetheless it is good to get an idea about what this MF-100 actually is. Keep reading and find out!

The flash consists out of multiple parts, similar to other barebulb flashes. The barebulb is plugged into the flash, after which the reflector and diffusor can be slid over the barebulb. In order to shoot with the flash a battery pack is required. I have used the MF-44 battery pack, which contains a 4400mAH Lithium-ion battery that should last for 2000 full-power flashes. Plenty of power!

My first impressions of the flash are nothing special. The quick recycle and the barebulb are the features which are the most interesting, but besides this the MF-100 has a 2.4 GHz trigger built in. It works with Jinbei’s TR-C trigger, but unfortunately I haven’t been able to test these.

It is possible to use the flash in two different modes: single or stroboscopic (burst of 5, 10 or 15 flashes). The current mode seen by one of the 3 LEDs on the back of the flash. There is a display with numbers similarly styled to a digital alarm clock on which the current power is displayed. The power can be adjusted from 1.0 to 6.0 in 0.2-step increments. No other functions can be changed besides the power and the mode; this is it. 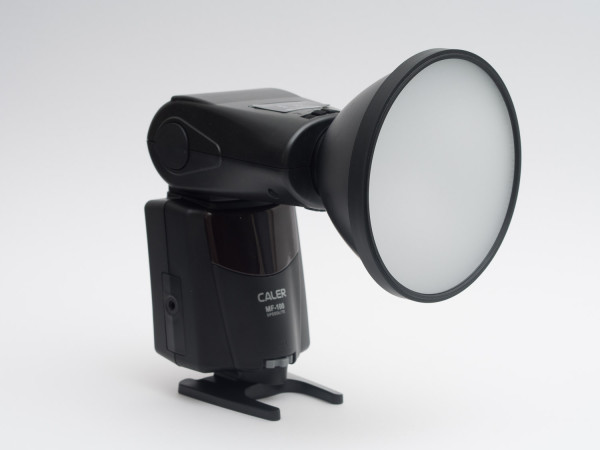 The MF-44 battery pack has one button to switch it on and a few indicator LEDs. One light indicates ready status, while the other two light up if either the battery pack is overheating or the battery is low. Similarly to other battery packs, the pack has two connections on which flashes can be connected.

While the plastic shell has a nice feel to it, I wouldn’t consider the housing as sturdy as my Nikon flashes. The finish is just not there yet. The different molded parts don’t seamlessly connect as they do with some other flashes. Buttons to set the modes and the power have a loud ‘click’ sound when pressed, which sound and feel rather cheap.

If you look past the simple appearance, you can see that the guts of the flash have a solid finish to them. The hot shoe is one of the sturdiest I have ever seen due to the fact it is made from two bent pieces of solid metal. The head can be moved in multiple directions by pressing a button on the side on the head, but I can assure you, when you release this button, there is no possibility that the head will move by its own.

The guts of the battery pack are protected by a leatherette case, which allows the pack either to be worn on the shoulder or on a belt. When the protective sleeve is removed a metal housing is revealed with a 4400 mAh NiMH battery inside. It is not extremely impressive, but the metal casing makes the battery pack feel nice. 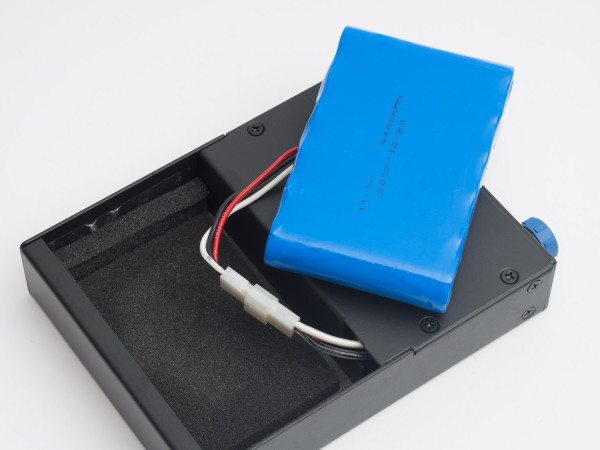 From my experiences the power that comes out of the MF-100 is roughly compareable to a regular speedlight, but it is not easy to make that comparision. The shape in which the light is projected is very different to that with a speedlight. Without the reflector the light is going in all directions, instead of only being projected towards where the camera takes a picture, if mounted on camera. In a softbox we want all light to go all directions, so that is why often an additional diffuser is installed when a speedlight is used. With a barebulb, this diffuser is not needed any more since the light goes in all directions already, improving the efficiency of a flash in a softbox.

The flash beeps every time it is fired or when the flash is ready to fire. You can imagine, with a recycle time of 1.2 seconds at full power this is not really a requirement. Furthermore you cannot turn it off. The person that thought they needed to inform the user each time the flash fired (and then again when it recycled) wanted to let everyone around you know how fast your flash can recycle. I have already heard some DIY solutions of threading a screw in the little speaker hole or removing the speaker all together from the flash body (disclaimer, flashes are dangerous, never open one without proper knowledge about electronics).

During the times I have used this flash I was not thrilled by it, but it haven’t let me down. It is reliable and certainly can keep up with your pace. If it wasn’t for the sound, you would forget about it. It just blends in with the blackground, making you worry about other things.

A comparision between the Godox Witstro and the Jinbei MF-100 is easily made, but the only thing that they have in common is that both are manual barebulb flashes. The price range of both flashes is not close, nor is the build quality. I feel like the Jinbei MF-100 wanted to be a big boy, but it lacks the power.

What is certain, the MF-100 is not a stealth shooter. The inability to disable the ready beep is quite *BEEP*; for me it removes the possibility to use this flash at a event. The shutter sound from a DSLR can be distracting enough, so adding an extra beep on top of it wouldn’t help matters.

However, while the flash isn’t loaded with features, the ones that it does have are good. The insane recycle speed combined with high thermal resistance means you can use this flash all full power, all the time. It’s just a shame that full power on this flash is not as impressive as it sounds, maybe 2 years ago it was, but not now with all the battery-powered monoblocs available on the market.

I am just not sure if I can justify the price (â‚¬320) for this. Comparing this to the Godox is something which is not completely reasonable, due to the higher price of the Godox. A comparison between the Falcon Eyes SG-100Bk and the MF-100 might be more fair. The Falcon Eyes has a bit more power, but is really bulky. 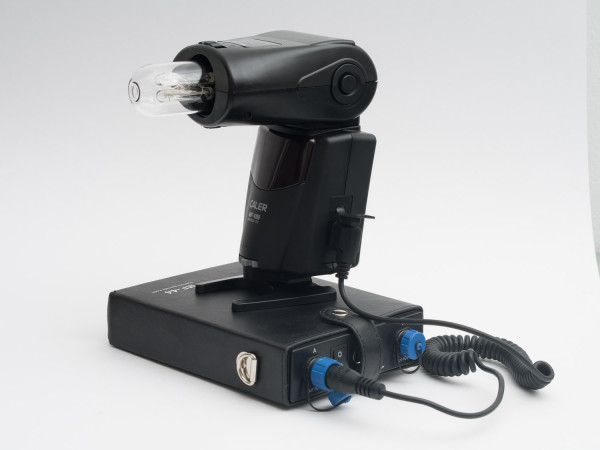 To conclude, the Jinbei MF-100 is a relatively nice flash, but it does not provide enough features for me to really recommend it. Wouldn’t mind having it, but I don’t think I would buy it when I am in the market for a new flash. Its basic, nothing more. If you would consider this flash, maybe its worthwhile to consider the AD180 as well. I think the problem of the MF-100 is partly that there are so many other excellent alternatives, but it does not stand out from the crowd.