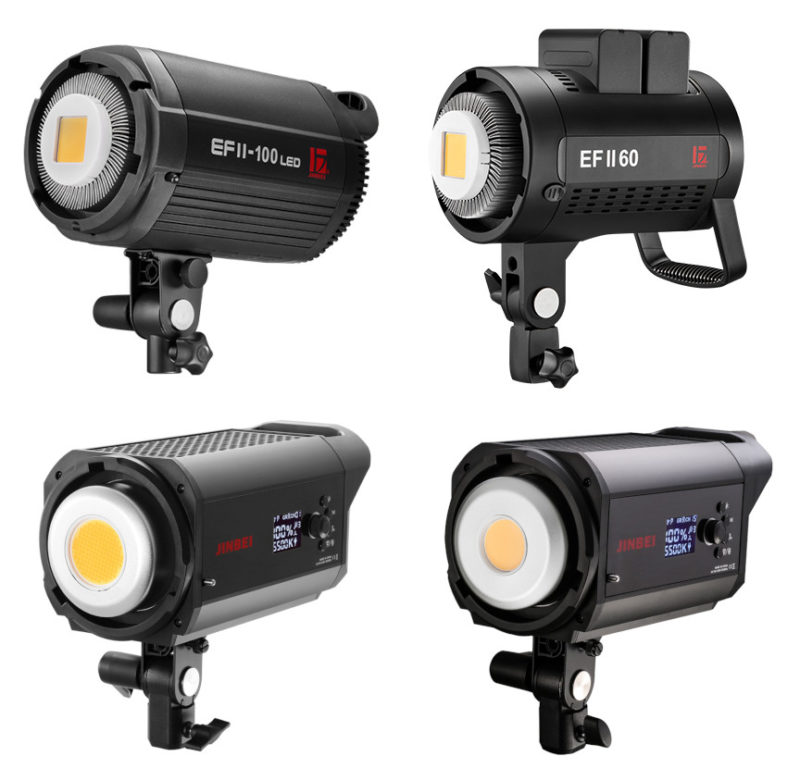 The last few years have seen a proliferation of new LED lights hit the market, and it can be quite difficult to keep track of them all, with more model names and updated versions appearing all the time. Which LED is best for stills photography? Which is best for video? For shooters on the move?

Jinbei, based in Shanghai, is one of the biggest photographic lighting manufacturers in China. It competes directly with Godox (check out their LED roundup here) among other brands. You may find their products marketed under the Jinbei marque, but they do a lot of OEM deals as well, so rebrands abound.

If you are a photographer, you might be interested in the firm’s xenon studio flashes, such as the Pilot, Spark and Digital Pioneer series, or portable options such as the HD-200 Pro and HD-2 Pro. Here, however, we will be looking at Jinbei’s current range of LED fixtures.

Jinbei is constantly improving its lights, which is great. However, the resulting string of model names are a confusing mess, and it is difficult to understand which is which. Did you know, for instance, that the EFD-150 and EF-150D are completely different lights? I will do my best to demystify the lineup in this article.

Jinbei’s first LED head was the EF-100 Sun Light, introduced back in 2020. A mains-powered, S-mount chip on board (COB) lamp, the EF-100 was incrementally updated over time, variously named the EF-100 Mark II to the EF-100 Mark V, but without actually changing the label on the outside. Other power levels were introduced, including a 200-watt version called the EF200 to EF-200 Mark V. To the bemusement of customers, Jinbei arbitrarily decided to reset the counter on model numbers, so at the time of writing, the EFII-200 is the latest model, and more up to date than the EF-100 V.

All the original Sun Lights were daylight balanced, but the EFL-series are tungsten balanced, with 3200K colour temperature. They are otherwise equivalent to the non-L versions.

The Jinbei EF-150D has a similar head design, but has a proprietary lithium-ion battery that fits into the top of the head, similar to Nicefoto’s N-Flash or HB-series LEDs. The ‘D’ ostensibly stands for ‘dual power’: you can also power the EF-150D from the mains. The newer EFD-150 is also AC/DC powered, but the battery power is via V-mount batteries, using the optional Jinbei EF-VM adapter. Presumably Jinbei considered it more sustainable in the long-run to support industry-standard V-mount batteries rather than proprietary ones. It also means the weight of the battery is on the external adapter rather than in the lamp head.

Unlike Godox, Jinbei doesn’t seem to really subscribe to the idea of having a contiguous ‘series’ of lights with common features. Each model appears to be introduced and updated independently to serve a specific use-case, rather in the name of series-wide consistency. The ‘series’ is thus longitudinally through time as a model or pair of models gets updated.

With that in mind: the Jinbei EF-60 is not really anything like the EF-100, other than being an LED lamp. It is not even a chip-on-board (COB) LED, but just a small, round panel lamp with a proprietary accessory mount. But it is powered by NP-F type lithium batteries, and that’s a feature it has in common with the EFII-60, if not with any other ‘EFII’ lights. In the same, the EFII-100 has an older design than most other EFII-100 lights, so it’ll probably be discontinued soon to make way for one with a digital display and built-in remote control (it’s the only EFII model that lacks these features).

Don’t worry if this all seems a bit hard to follow. I have summarised the different features of current Jinbei lights in a table below.

All of Jinbei’s monolight-style LED lights today use the Bowens S-type accessory mount. This means you don’t have to think too hard about modifier compatibility. However, it also means thatâ€”particularly for 60-watt lampsâ€”the light head is bigger than it might have been with a different mount. The Godox ML60 or Nanlite Forza 60 use smaller proprietary mounts to get greater portability, at the expense of native compatibility for some light shapers. If the HD-200 Pro proves popular then it’s possible that smaller form factor lights using the Jinbei HD mount might appear in the future.

Most current Jinbei models (with the notable exception of the EFII-100) support a handheld 2.4GHz remote control called the EF-RC. They are also cross-compatible with Jinbei’s TR-series flash triggers, including the TR-V6, TR-Q6 and TR-Q7. None of them will actually ‘flash’, but the triggers give convenient wireless control of power levels from the camera position, with support for multiple frequency channels.

All Jinbei heads have cooling fans; some are quieter than others. In certain models, such as the EFD-150, you can disable the fan when brightness is set to less than 50% of full power.

Unlike Godox, Falcon Eyes or Nanguang, Jinbei does not make dedicated fresnel lamps for filmmakers. Instead, they offer an EF-LED Spot Snoot (a less cumbersome solution than their Spot Lite fresnel) that attaches to a Bowens mount, providing 10â€“40Â° zoom. It comes with magnetic gel filters. Another option is the DP-Ã¸6 focusing snoot (designed for the DP-series studio flashes but compatible with any Bowens mount light).

The following table compares the key features of Jinbei LED monolights. Prices are just a rough guide to give an idea of the product hierarchy; check with your local dealer for actual availability. (Where multiple models are listed, the price given is for the cheapest one.)

Jinbei’s matrix-style LED panels all use the nomenclature EF Panel, or EFP. The smallest ones can fit on your camera and the largest ones are designed to go on a light stand.

Right now, LED panels are the EF-12 (bi-colour), EF-15 (single-colour) and EF-20 (bi-colour), all of which can be mounted on a camera and draw power from NP-F type lithium batteries. The EFP-400 is a much larger professional-grade panel with DMX512 support, taking power from the mains or V-mount batteries and bi-colour output control, as well as built-in support for the Jinbei EF-RC and TR-V6 remotes.

The only other lights Jinbei currently have in their catalogue are the LR-360C and LR-480C, ring lights for use in make-up, beauty and live streaming.