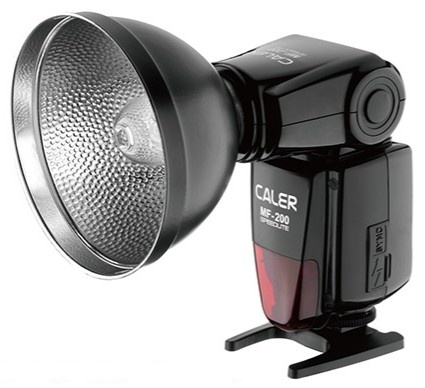 Jinbei, the Chinese lighting manufacturer, has unveiled the latest model in its line of bare-bulb shoe-mount flashguns. The Caler MF-200 follows on from the company’s first offering, the Mini Flash MF-100.

The latest Speedlite has a new modern form factor that looks less likely to be confused with a Quantum Qflash. And, if the specs are to be believed, the MF-200 has around twice the power of the original version â€” GN 98 vs. 60 â€” with recycle times as quick as 0.3 seconds.

Other additions include a fancy new LCD screen, an autofocus-assist lamp and high-speed sync support to 1/8000 second. It is not clear how exactly the latter feature is implemented â€” whether through the hotshoe or via the built-in 2.4GHz radio transceiver. If the latter, Jinbei’s light will be competing directly with the Godox Witstro series, which can achieve fast syncing through the Cells II triggers.

There is no TTL control â€” instead you can manually adjust the power from full to 1/128 in 1/3-stop increments.

Why go bare-bulb? With its exposed flash element, the Mini Flash offers ability to shape the light (e.g. using softboxes) almost like a professional studio head, but with portability closer to that of a normal camera flashgun.

The MF-200 takes its power from an external Ni-MH battery pack â€” either the Caler MF-44 or MF-35, both of which can also be linked up to Canon and Nikon speedlights.

No details on pricing or availability have yet been announced. Visit the Jinbei Alibaba page for more info. The older MF-100 costs Â£180 (HK: $200) from UKphotodistro, Gadget Infinity and other dealers.

Does this product interest you? Share your thoughts below.