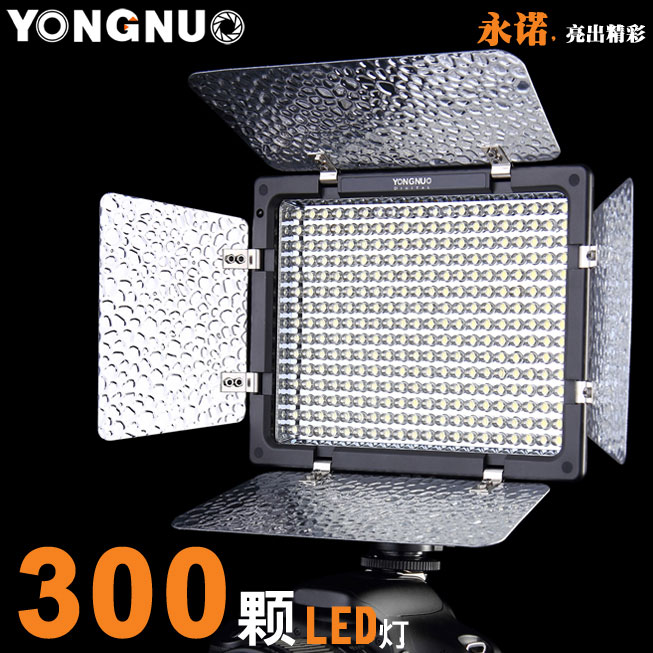 For the lazy videographer in your life, why not get them a labour-saving device this Christmas in the form of the new Yongnuo YN-300? Billed as the world’s first LED with a “built-in photometric system”, the device will match ambient light levels automatically, freeing up the cameraman to concentrate on other considerations such as focus, composition and so on.

It’s not yet quite clear how cleverly (or not) the firmware responds to environmental conditions, but it may be unreasonable to expect the YN-300 to read somebody’s mind when it comes to creative decisions such as fill lighting ratios. On the other hand, some could argue this is basically how TTL flash metering works; and people still use that widely, despite its inherent limitations. (Indeed, TTL-supporting flash radio triggers appear to be increasingly popular!) Of course, the YN-300 has full manual controls too, for those critical assignments where a computer can’t be trusted to pick the right settings â€” or when constant light output is called for.

Loyal readers will recall this isn’t actually the first LED that seemed to offer this functionality, because the company’sÂ YN-160II model claimed to have it too, as well as packing a built-in microphone for video. But the YN-300 is bigger and brighter, while still being battery-powered.

As well as the distinctive photometric system, the YN-300 has a range of other useful features, such as a remote control (which doubles up as an infrared remote for your camera), a number of different mounting options (a handle grip is part of the kit) and built-in barndoors. The colour rendering index (CRI) is listed at 87.5%, with a claimed energy efficiency of up to 93%. Of course, colour correction gels can be added: you slide the filters in through a hidden slot in the side of the lamp. Four are included: blue, red, white and orange.

To buy an YN-300, you can order them online now for around US$75. Not too bad for an LED video lamp this size, let alone one with all these extra features to play with. For more product information, visit the Yongnuo company web site.

Is Yongnuo’s auto luminance adjustment the filmography equivalent of an automatic TTL flash, destined for great things and breaking down barriers to entry-level video lighting users? Or is it just a silly useless gimmick? Let us know in the comments below!