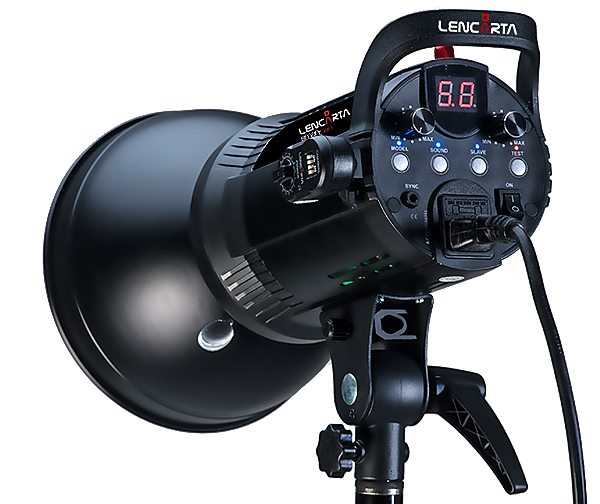 British lighting company Lencarta has announced a new flash head. The SmartFlash 2 is an entry-level light designed for home photo studios. At Â£109.99, it offers a lot of flash for not very much money.

For less than a Nikon SB-300, you get a full-sized studio head complete with modelling lamp, accessory mount and optional wireless remote control. It isÂ Â£10 cheaper than the Elinchrom D-Lite RX One and twice the power at 200Ws.

“Of course, weâ€™re not the only manufacturers to offer a high tech, modern flash head with full remote control,” said Lencarta’s Garry Edwards. “But we are the only people to offer all this, with a true 5 stops of adjustment (which some people describe as 6 stops) at a really affordable price.”

The Godox-made SmartFlash 2 replaces the original SmartFlash (by Jinbei) in Lencarta’s lighting lineup. It has a new metal chassis, a brighter modelling lamp, a wider power control range and added Lencarta WaveSync support.

The WaveSync controller is the same radio triggering system as for the Lencarta Atom and SuperFast, so you can use the different lights together. It allows remote power adjustment, triggering and modelling lamp switching from the camera position.

The SmartFlash 2 is up for pre-order now, Â£109.99 for a single head or available as part of a twin-head studio kit, from Â£299.99. Deliveries begin in January. Visit Lencarta’s web site for more information.

Can you see one of these in your 2014 home studio kit?