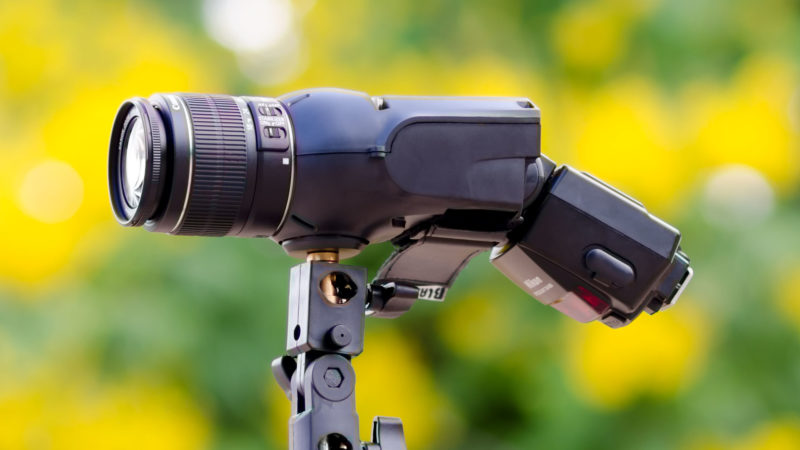 A new kind of light-shaping tool has been announced, the Light Blaster. The manufacturer calls it “the first Strobe Based image projector”. What is it, exactly? It’s a fresnel for your speedlights. Normally you’d find such a modifier in the theatre, club or a high-end photography studio, but the Light Blaster is designed for shoe-mount flashguns.

But it’s bring-your-own-glass with this device. The Light Blaster comes in Canon and Nikon versions, each with a mount for you to attach SLR lenses, which will do all the (manual) focussing and zooming. There’s also a slot into which you can put 35mm slides (making it into a projector) or assorted gobos. You can make them yourself or buy an assortment from the same company. The whole apparatus mounts on a light stand with a standard tripod socket.

The Light Blaster costs $99 (USD) for the Canon-fit version, or $119 for the Nikon variant. Flashes and lenses are not included. “Creative Kits” â€” packs of pre-made slides â€” are available separately ($17 each). There are no distributors just yet so you’ll have to buy directly from light-blaster.com.

Udi Tirosh, author of DIYPhotography, the company behind Light Blaster, describes it as “a light shaping modifier that will change the world of photography forever” and “a reality altering device”. Is he possibly being a bit too optimistic about the market response? Let us know what you think about it in the comments below.