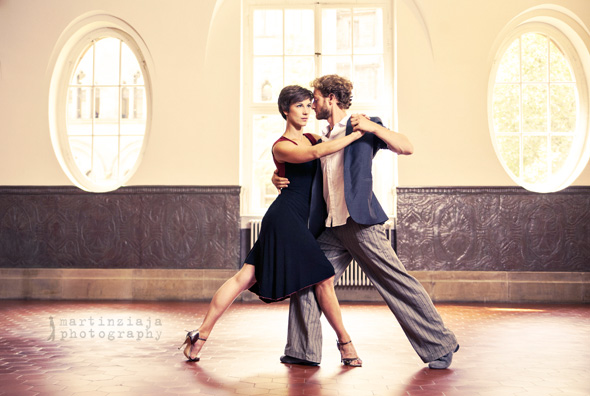 In my previous tutorials I focused on either using no light modifiers at all or using more or less handmade modifiers (like the self-made translucent scrim). Now I want to kick off a series about “real” modifiers. Modifiers that are produced especially for photography. I will start with the modifier that offers most versatility for the cheapest price: umbrellas.Â  And because they are so versatile I split these tutorials to demonstrateÂ  several ways to use them.

Today I want to explain why I chose an umbrella for the following shot and how I used it. Here’s the picture:

As you can see, we have beautiful even light, that still has an edge to it and the whole scene is illuminated equally. I wanted the outdoors to nearly blow out, because I wanted to get rid of the scaffolding which was at the opposite building. So that gave me my basic exposure and the flash was only used to illuminate the dancers and the backwall underneath the windows.

To get that even lighting that still has a certain direction, I used a 42″ umbrella in shoot-through mode. That allowed me to point the umbrella directly at my models to get that nice transition from light to shadow in the females face. But this I would have gained with a softbox or a reflective umbrella or alike as well! But with these light modifiers, I would have had lit only the couple and not the whole room! A shoot-through umbrella spills light all over the place.

In my case, I placed the umbrella just outside the frame camera left, to allow the flash to not only light my subject, but to spill the flashlight all over the white wall behind me, using it as a huge (hence soft) fill.

So all I needed here, was just one little speedlight on a stand,Â  firing in a small 42″ shoot-through umbrella, triggered by cheap Yongnuo radio triggers.

In many occasions, the huge amount of spill light coming from an umbrella is rather a problem than something you would go for. But knowing how to benefit from that umbrella characteristic can help you light huge areas with just a single speedlight.