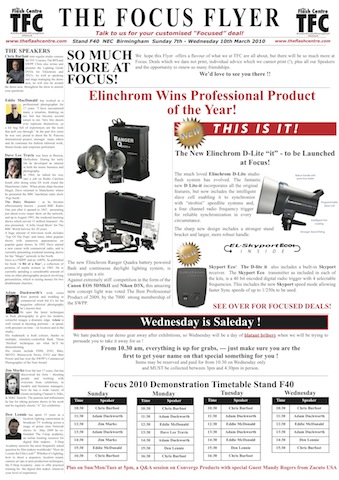 The Flash Centre (UK) has some offers on during Focus On Imaging, 7th-10th March. You can take advantage even if you aren’t at the convention, as the deals will also be available online. More details here.

A review of Godox‘s Sony-fit PT-04 flash triggers has been posted here. On a related note, bad news for Sony users, who likely won’t ever be getting an iISO-fit Yongnuo RF-602:

Asked the manufacturer, they said that the Sony version won’t be produced in the future, but only Canon and Nikon version. Some ideas may meet your needs:

First, Sony A900/A850/A700 has PC port, these cameras can be connected to the the transmitter with a PC-PC cable, it will work as attaching to the hot shoe. But kindly note that and other Sony DSLR cameras doesn’t have PC port.

Second, use a YN-H3 adapter to connect the transmitter to the Sony hot shoe.

The Yongnuo YN-465 (Canon version) flash got a positive review here. Meanwhile the newer Yongnuo YN-467 (Canon) received 4.5 stars out of 5 in this short review.

There have been some rumblings about the touch-screen-controlled CM-series monolights manufactured by Chinese company Menik, manufacturer of studio lights (and, er, cookers). The only distributor we know of so far is this one in Australia.

If you have comments, feedback or further information, be sure to leave a comment or send us an e-mail.