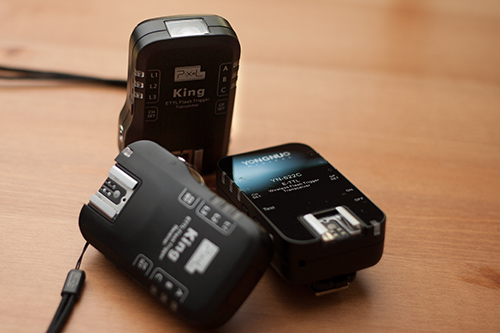 I know, I know: the Yongnuo YN-622C and Pixel King have been out for a good while and many reviews have been written about them. However, we note that these products aren’t only aimed to the enthusiast, but also the professional, and thus with permission from …ergh the Editor! We embarked on the epic adventure of testing them in a long-term review. (Well, it wasn’t epic to be honest…)

How did they fare??? Do they mix well with Chimichangas? Let’s find out.

There’s no doubt there are lots of products trying to tap into Canon’s E-TTL II wireless compatible camera and speedlite system, mostly because the original Canon ST-E2 is rather… ehmm… crappy. So these products turn your cameras and flashes from booohoooo infrared Mr. “I need Line Of Sight or I won’t do anything” into a fully featured radio communication system between your camera and speedlights. (You know, like the future!)

Among them you can find some of the really popular chaps on the block: the Yongnuo YN622C and the Pixel King (especially the Version 2) â€” you know, the ones who get to dance with whoever they want and they get invited to parties and all. (In the corner the Cactus V4 cries forever alone… poor thing.)

Since I shoot with Canon gear I decided to take them for a spin on the day-to-day of a professional’s work and see how they behaved.

This won’t be a step-by-step review; this article is a set of impressions about each system with their strong and weak points and my personal opinion on which one did best.

Both radio triggers integrate with Canon’s wireless E-TTL II system, with some sort of magic or pagan ritual (kidding… it is all science and technology 😉 ). They make the camera believe there’s a commander unit on the hot shoe and thus you can start to assign orders to speedlights to be fired in the Wireless system (with most recent Canon DSLRs).

The good thing is that since it is all via radio triggering you won’t have silly line-of-sight problems or the sun blocking the signal between master and slave.

Price-wise, a set of a Pixel Kings (receiver and transmitter) should be around 115 euros; a set of Yongnuo YN622C is around 75 euros for two transceivers.

Also worth saying both triggers allow my 5D (classic) to sync at full speed (which other radio trigger systems fail miserably to do); the same goes for the 5D MKII. Sorry Mark III users: I don’t have one at hand, but if you want to give me one to keep and test I won’t be mad. All in the name of science and press for you! 😉

I may be spoiled but I tend to prefer transceivers: Murphy’s law is especially prone to apply to photographers so transceivers tend to be more friendly in case something happens to one of your radio triggers/receivers.

In the “what’s included in the box” I have to hand it down to the Pixel Kings. These have tons of stuff included with them: a foot to mount your King with a flash; a cold shoe with adhesive to stick it on the side of your monolight or pack so the transmitter isn’t hanging off the sync cable (take note radio trigger manufacturers: this should be standard in every package of every radio trigger out there); multiple types of sync cables; a nice soft padded mini bag to carry them; lanyards; etc.

The cold shoe adhesive isn’t that great as with time it would not hold the transmitter and simply pop off (VelcroÂ â„¢ and everything solved. The YN622C comes with sync cables and the units. Both have screwlock PC sync cables.) Many manufacturers could learn from Pixel here!

Both user manuals are in good English and describe pretty well the features and functions of the units.

There are other differences between them: the Kings don’t have a test button (weird…) but the YN622Cs do.

As for batteries, for some reason my Kings don’t like Eneloops and talking with other people they seem to have the same problem.

In the way of form factor they are similar so I won’t expand much here, however I have to admit that the YN622C is much more sturdy, not that the Kings are fragile at all, but the YN622C are really solid (inspires a lot of confidence).

In day to day use I have to say that the YN622Cs were super reliable, not a single hitch in use (sync in every shot). I didn’t have problems with the Kings when using them with studio lights, however with speedlites â€” for reasons I don’t fully understand â€” they wouldn’t sync sometimes (I waited for the beep signal of the speedlite telling me it was ready to be shot again, fresh batteries too).

These units to be fair were pre-production, so we will have to see if the final ones aren’t exposing this problem. After browsing the net I was able to check out that I wasn’t alone with this problem. You know the batteries are running low when you start to see the shutter band creeping a bit (keep fresh batteries at hand just in case).

Both systems allow you to tap into HSS and into a tricked version of HSS. Â (Krolop-Gerst in their blog explain how they do it with a Jinbei FLII 500 and a YN622C hereÂ in perfect German!)

I don’t have a scientific way to test it but I think the YN622C are a Â less efficient in terms of battery life than the Kings (again subjective opinion). In my experience if I forgot I left the batteries in the 622C they would be drained quickly even if the device is turned off.

What would I change?

After all this time with them I’m going to keep the YN622C with me from now on. Solid, reliable and trusty, I have used them with a 1100D, 600D, 5D, etc. and it went without a hitch. I can recommend it without doubt, especially to speedlite shooters and those with a 5D or 5D MKII which are annoyed that their radio triggers won’t allow them to sync at full speed.

Keep in mind though that the battery issue is there (read above). The Kings work great but my guess is they need a tighter quality control. Our upcoming review of the sequel King Pro and Pro X triggers might reveal some improvements.

If someone’s argument is: “They are made in China boo-boo-beh-boo” I would say: Try them yourself before you diss them; you will be surprised (in a good way) and I would also say iPhones are made in China too, so what up?

You can find the Yongnuo 622Cs on saleÂ here and the Pixel KingsÂ here, priced around $80 and $130 respectively. If your Kings ship without the latest firmware then you can update them via the manufacturer’s web site.