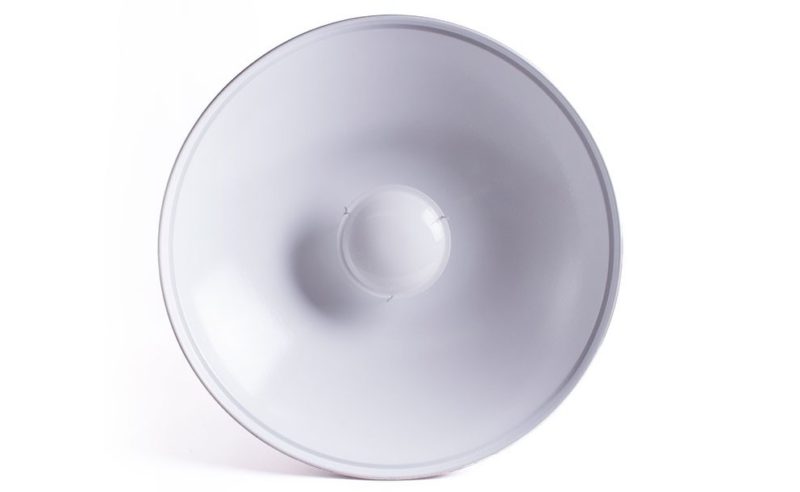 LumoPro has sent us its new 22-inch (56-centimetre) soft light reflector to try out. The LP955 Multi-Mount Beauty Dish is billed as “a versatile and lighting modifier built for portrait and fashion” . Priced at just $99.99, it isn’t too hard on the wallet. But is it our cup of tea?

Though this is a full-sized beauty dish suitable for studio lights, we were unable to get any of our own accessory mounts to fit it. Unsurprising, since there is no universal standard for speedring inserts and ours came from the darker depths of eBay. LumoPro says:

“The ring insert has to be 5.625 inches (14.2875 cm) in diameter to work with the beauty dish. This is the standard insert size on LumoPro speedrings, Westcott Speedrings, some older Creative Light Speedrings, among other generic untested brands”.

If in doubt, just buy the appropriate insert from LumoPro. As an alternative, we’ve been using the modifier in combination with the LP739 Double Flash Speedring Adapter, which is a mount designed to hold a pair of shoe-mount flashguns. In fact it has a very similar design to the just-announced Photoflex Rotating Hardware.

An all-metal construction, the build quality of the adapter can’t be faulted. It even comes with a soft case to protect the kit from all those imaginary threats that might damage a solid metal bracket (it does keep everything together in a compact package so that’s nice). One thing you do need to be aware of though is that no tilt adapter is included. The spigot on the bottom of the LP739 will fit onto a tripod or light stand but you will need to buy an umbrella bracket to be able to point your system up and down. 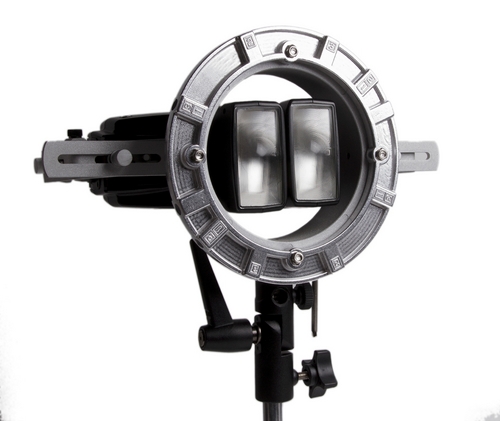 The centre hole is big enough to accommodate either a pair of speedlights or a beefier light such as the Cheetah Light CL-180.Â One of the annoying things about having two speedlights mounted opposite each other is that one of the flashguns will have its battery door facing the floor, which makes replacing batteries without dropping them a bit of a fiddle. But it’s a very minor quibble â€” you can just take it off the bracket if it bothers you. For my own photography I found that just one speedlight provided enough power, so for much of the time I left one of the mounting arms unattached.

Like the flash bracket, the LumoPro LP955 22-inch Beauty Dish is also made entirely out of metal. If you drop it a lot then it’ll probably distort and get a few dings in it, but you don’t need to worry about protecting this thing like you might an umbrella or a softbox. It’s also huge. Remember that, because it doesn’t collapse or fold down in any way and will need somewhere to live at night.

In terms of output, this light modifier is fantastic. It’s really quite hard to take bad pictures with this thing. Just point it in a sensible direction and meter your scene properly and it’s like falling off a log. The inside is painted with a matte white finish, which should have an effect distinct from other shiny “specular”-type beauty dishes. LumoPro doesn’t offer a silver version so it’s hard to say exactly what the differences will be. But for non-commercial portraiture-type stuff, the white one does me fine.

Using the dish with speedlights rather than studio heads is a less-than-ideal scenario, since shoe-mount flashguns really aren’t designed to be used with any sort of light modifier. This beauty dish certainly doesn’t seem to mind though, with a smooth, even output regardless of the light source pumping photons through it. Catchlights in the eyes of my subjects (which in all the examples posted here happen to be me) appear rounded and natural â€” leagues better than the jagged outlines you might get from octagonal softboxes or umbrellas.

The white finish generates a very soft and even light. And at the same time you’re unlikely to run short on power from too many f-stops being “lost”. I eventually managed to get a 400Ws Nicefoto N-Flash to poke its head through the LP739 adapter but was still using it at relatively low settings for the f/16 self-portrait above.Â The shots below were taken by the lovely photographer Kathryn MacPhail.

Now while the output of this beauty dish is beautifully soft, it does mean there is a lot of light being spread in all directions, creating all kinds of problems with spill or lens flare depending on your particular lighting setup. For this LumoPro offers a $49.99 grid attachment, the “LP955G”. Clip this bad-boy on the front of your beauty dish and the effects are dramatic:

Same soft light, but no more spill on the background, no more lens flare (if you’re pointing the dish back towards the camera) and no hard-edged fall-off. In fact, this grid is so effective that it achieves the seemingly impossible â€” soft, low-key portraits in even the smallest of white-walled rooms.

After you’ve had the opportunity to try a beauty dish like this one, you’ll be wanting to use it as a main light for all your people photography. While it is, arguably, simpler to get nice light and catchlights out of this device than out of the equivalent softbox or umbrella, unless you have a large studio then you’re still better off with the latter tools, as they are lighter and fold down to nothing. The 56cm x 56cm beauty dish will be the elephant in the room until you find somewhere to store it, and can be a source of headaches if you are travelling to a location shoot but don’t have a car.

In summary, there’s no question of this being a good light modifier, well worth your money. The grid attachment is a no-brainer as well. The only thing you really need to think hard about is: “Will I have anywhere to put it?” And this isn’t even the smallest kind of beauty dish you can get. If you’re prepared for this, go ahead and buy one.

The recommended retail price for the LP955 Beauty Dish is $99.95, with the grid attachment an extra $49.99. The LP739 Double Flash Bracket is $49.99. (European prices unfortunately aren’t quite as good, at â‚¬79, â‚¬61.25 and â‚¬99.95 respectively.) LumoPro has distributors in the USA, Europe, Israel, China and Australia. Visit lumopro.com for more information.