A new series of British-made flashes promise to offer consistent, high-speed lighting for location photographers. The A-Lux Mono Range is the latest line of battery-powered flash heads from Magneflash, an English manufacturer.

Magneflashes are specifically designed to work at fast shutter speeds of 1/250 second or more, making them a good match for cameras with leaf/electronic shutters (e.g. compact cameras) or for DSLRs and mirrorless cameras equipped with fast flash triggers. 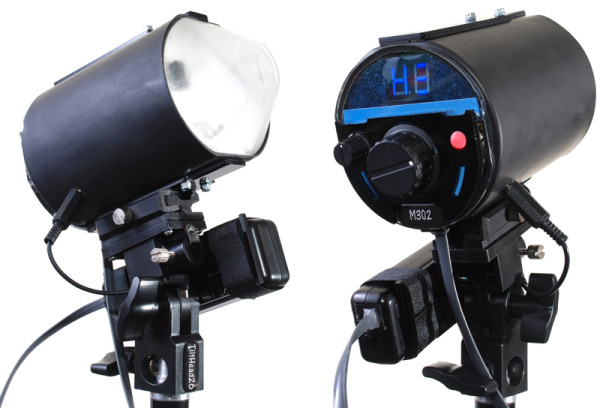 All hotshoe flashes (and an increasing number of studio flashes) use IGBT circuitry, in which flash duration is roughly proportional to power level: the lower the power, the faster the flash. This makes freezing action easy, so long as not much light is needed, but also means that the colour of the emitted light varies between power levels.

Magneflash monolights work differently, with no change in duration or colour between power settings. There are multiple flash tubes in each head and output is adjusted by switching some of them off. The new A-Lux Mono M302 cites a flash duration of 1/3000 second, which is pretty quick compared to the Nikon Speedlight SB-910’s 1/880 sec at full power, or even the Profoto B1 at 1/1000 sec â€” though both these lights are much quicker once you turn the power down.

In practice, this means that while the Magneflashes might be nothing to write home about at slow shutter speeds, at short shutter speeds their effective brightness relative to other brands improves immensely, since much of the power with slower lights is cut off and not included in photographic exposures.

Another unique feature is the monolight’s ability, when used as a slave, to match changes in output from master flashes. The company says: “EV light output adjustment on a camera mounted speedlite can be used to remotely change the amount of light received from the A-Lux Mono.” Who needs CLS?

There are three A-Lux Mono models already available, from the basic M202S MonoSlave to the more powerful M252 and M302. The top-end M402 is also coming soon. The entry-level M202S has a built-in battery whereas the M252 and above use external PPA or PPB Ultra-Sonic Power Packs. You can connect two packs at once to reduce recycle time and increase the total number of flashes.

Billed as “truly portable, studio-quality flash”, the A-Lux series seem cheap as chips considering they are made in the UK.Â At the time of writing, prices (excl. VAT) are as follows:

Update: Peter Louden, MD of Magneflash, told Lighting Rumours: “We hope to be shortly announcing a version of the M302 (M302H) which includes HSSS, what we call High Speed Slave Sync (to 1/8000th). This is a function that, at full power, supports speed-lights with HSS/FP mode.”

Magneflash will demonstrate the new A-Lux lights at The Photography Show at Birmingham NEC on 1stâ€“4th March 2014, stand H12 in Hall 12. For further information visit magneflash.com.