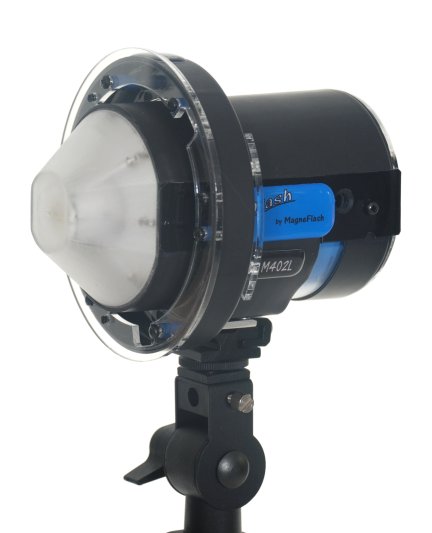 British lighting manufacturer Magneflash have improved their line-up of Advanced Portable Battery Flash Units. The SplashÂ M30 and M40 series have been superseded by the new M302 and M402s with a range of electronic and mechanical improvements.

As with the original Splashes, Magneflash’s latest lights are designed for photoshoots out on location, taking advantage of integrated lithium ion battery packs and fast flash durations.

The most recent models have had their electronics refined to give a “considerable improvement in exposure consistency” over their predecessors, along with an increase in light output and recycle speed to match or exceed that of competing 200-250Ws heads. The company claims that the 302 and 402 series have “greater compatibility” with fast-syncing cameras than before, letting you use flash at higher shutter speeds with snappers such as the Fujifilm X100.

As well as the performance enhancements, all Splash monolights now come with a Bowens S-typeÂ accessoryÂ mount as standard, allowing you to use the flashes with the same light modifiers as everything else in your studio. The fiddly U-shaped tilt bracket has been replaced with a superior swivel adapter, which can be removed for transportation and storage. Should you want to leave the adapter off, you can then mount the body of the Splash to any standard tripod, including Gorillapods. 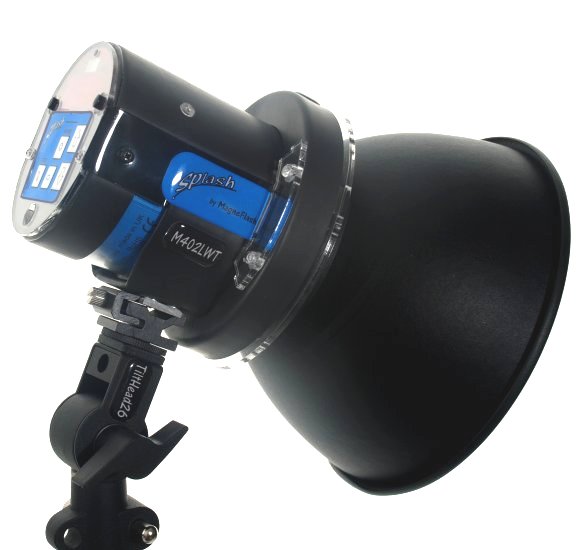 Magneflash say that various aspects of the flash heads’ construction have been improved, “giving a solid/strong feel to the units”. When you buy a set of Splashes, a felt-lined ABS case is included, big enough to hold a pair of the units plus chargers and reflector adapters.

One of the main criticisms of the Splash concept was that the batteries are non-removable, so if you run out of juice in the middle of a photoshoot it is impossible to swap in a fresh one. Thankfully, the firm have promised that external battery packs will be unveiled some time in the new year, compatible with existing M402-series heads. Magneflash’s Peter Louden explained,

“In addition to their internal battery power, the M402s can be connected to external, palm-sized ultrasonic power packs giving 400+ and 800+ full power flashes. These two packs will be available in January and will considerably extend the use of the system to event and schools photographers etc.

“The system will allow purchasers of an M402/L/LWT flash units the option of purchasing the power packs at a later date, should the need arise, unlike most flash-head and pack systems where the pack and head have to be purchased at the same time.”

Prices for the Magneflash Splash start at Â£258 for the M302 series and Â£420 for the M402 series, including VAT. For more information and to order, visit the Magneflash web site. Would you be interested in splashing out on a Splash Mono? Share your thoughts in the comments below.