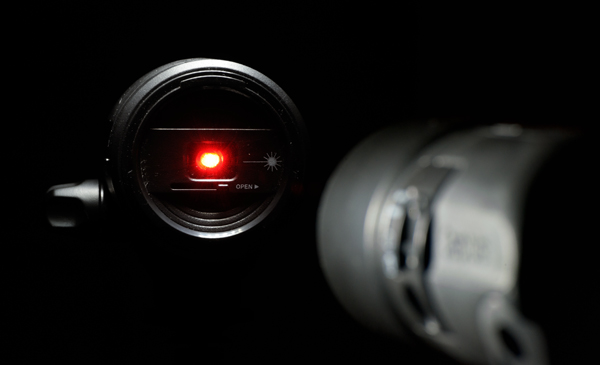 I was recently approached by Cactus to try out their new inexpensive laser triggering system. Called the Cactus LV5, the system is made up of an emitter, producing a red laser beam, and a sensor. Set them up pointing at each other, then the receiver detects each time the laser beam is blocked and â€” either instantly or after a brief delay â€” sends a signal to whatever’s attached to it.

Why would anybody want this? Imagine you are trying to capture photographs of wild animals. Then you can set up a rig like this and remove yourself from the scene (say, for safety, sleep or to avoid disturbing the environment) while the system takes your pictures for you each time your subjects pass a certain point. Back in the studio, the LV5 may be used for high-speed photography (read: things exploding and bumping into each other) or for hands-free self-portraits.

As well as setting off flashes or cameras via a cable connected directly to the LV5 sensor, there is also a Cactus V5 radio transmitter built into it. This feature inevitably meant I had to dig out my V5 triggers to test it out â€” with some reluctance because, of all the wireless remotes I have tried, it is one of my least favourite. The V5s are not necessarily bad flash triggers but they are rather clunky and low on features considering the amount of marketing they seem to get. Just as well then, the LV5 compatibility gives the Cactus V5s a new raison d’Ãªtre, elevating them from mediocre to something more desirable.

Of course you can use other radios with the LV5 too but you’ll need to plug them in. Your typical configuration is likely to have a laser trip-wire setting off a remote shutter release on your camera, which in turn synchronises with flashes if you are using them. There are a lot of components to such a set-up and not necessarily many things you can use it for, so unlike buying flash triggers (which every photographer should have) it is not a given that you’d want a set of LV5s.

There are few awkward design choices. For example, the emitter and sensor are each about the size of a small camera lens, yet much of the space inside has been wasted. There should be enough room for AA batteries but instead the LV5s take two or four AAAs at a time. The LV5s are much bigger than the sensors/lasers they house but are cylindrical on the outside â€” presumably for no other reason than it looks cool â€” which means they do not lie flat on a tabletop or shelf without attaching a mini stand (not included). As on the V5, the radio channel dial is recessed and hard to read off, especially in the dark. Power is toggled by a button on the top, which is too easy to press, so by sod’s law it will switch on in your bag and run the batteries down unless you remove them.

However, it is surprisingly easy to get up and running with the LV5s and they do what they are supposed to do with little fuss. The instruction manual is very clearly written (not Chinglish) and comprehensively goes through all the different situations you might want to use them in. The devices are also pretty solidly made.

Now, I don’t shoot wildlife photography nor do I find anything terribly interesting about dropping fruit into glasses of water, so it took me a while to think about how I would actually test these laser triggers. With a nice cup of tea it’ll be easier to get the creative juices flowing.

The Cactus LV5 can be depended on to trigger every time the beam is broken. For better or for worse. Be sure to switch one of the components off while you are still setting up or you’ll be assaulted by clicks and flashes every time you pass through the studio. At the same time, the beam is only a couple of millimetres across so aim it well and invest in a smooth-pouring teapot for best results.

I know what you’re thinking. This is a ridiculous example. I mean… tea but no milk? Here it is. 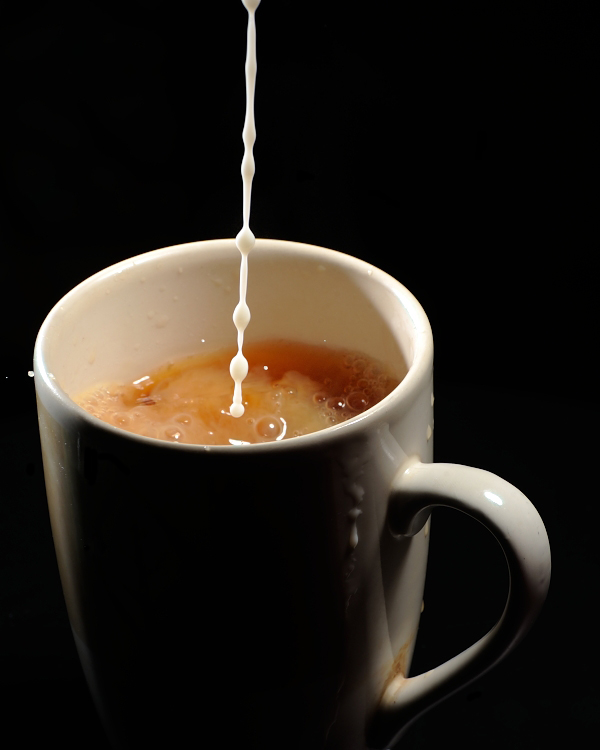 The setup involved the LV5 laser emitter sitting on a counter up and to the right, with the sensor unit (in ‘Delay’ mode) stashed in a shelf below and to the left. The laser beam passed a few inches above the top of the mug so that the liquid would break the beam on its way down. The LV5 would then trigger a Cactus V5 radio receiver connected to the camera, which in turn triggered flashes via a different brand radio remote. Lighting was provided by a CononMark Leopard AK4.0 III monolight above and behind, with a Yongnuo YN560-III flashgun on the left â€” both at 1/32 power. 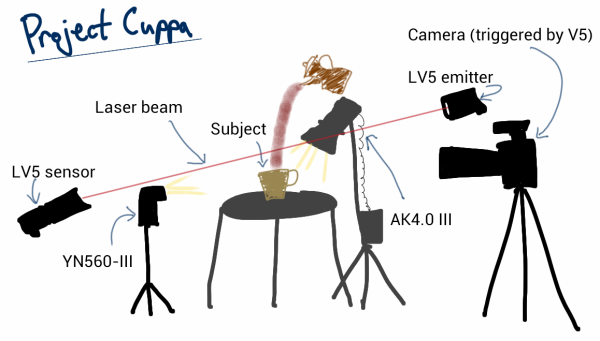 Here is a lighting diagram, lovingly drawn on my Samsung Note 10.1

(arguably the best tablet available for photographers, because with it you can create works of art like above).

Could I have taken these shots without the laser triggers? Possibly. There are other applications where they would be more indispensable, such as wildlife photography or high-speed shooting (abstract water droplets and the like) but realistically most people won’t be doing those sorts of things very often. On the other hand, in the studio, the Cactus LV5 effectively acts as a “third hand” to help you out, and for that it is much appreciated.

The Cactus LV5 kit costs $110 from the Cactus Store. Other Cactus dealers are listed here.

Right, that’s that done. Time to put the kettle on.