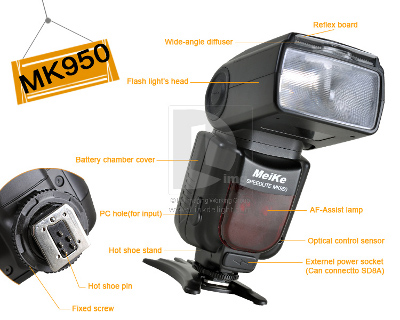 A new automatic flashgun has been released by MeiKe of China. Sitting alongside their earlier manual-only speedlight, the MK930, the MeiKe MK950 adds a range of features such as Canon E-TTL, an LCD screen and stroboscopic mode. The device was on show at Interphoto Shanghai with other upcoming MeiKe speedlights.

The MK950 is based on the same body as the MK930 – both of them essentially clones of the Nikon SB-900. However, there are a few key differences from the outside. Firstly, the newer TTL flash has a metal foot while the older manual unit has a weaker plastic one. Additionally, to be able to use all the extra features, the MK950 has a liquid crystal display to replace the basic “idiot lights” on the MK930. 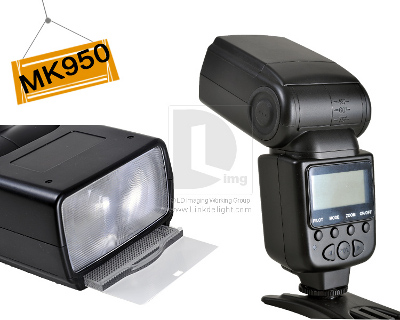 So what new features are inside to justify the $20 price difference?Â The primary addition is TTL mode. Only Canon E-TTL for now, but a Nikon model may be on the horizon. You can adjust the flash exposure compensation by +/- 3EV. It isn’t specified whether the electronic zoom head will automatically match your focal length. Manual mode is also available with adjustment down to 1/128 power.

Another extra function is stroboscopic mode. You can choose the frequency and number of flashes in the control menu. Something of a novelty, stroboscopic mode can have various creative applications. However, this isn’t the same thing as high speed sync, which is not supported.

According to retailers, the MK950 has an “improved wireless triggering sensor”. Note that the original MK930 also had an “improved wireless triggering sensor” in its feature list. Improved on what, then? The claimed range is 20-30 metres indoors and 10-12 metres outdoors. There is a simple optical slave mode and one that ignores TTL pre-flashes.Â Unfortunately, unlike the Yongnuo YN-565EX, there is no advanced wireless slave mode for either Canon or Nikon, so any off-camera use must be in manual.

MeiKe specifies a guide number (GN) of 53 metres at the 85mm zoom setting for the MK950. Meanwhile the MK930 had a GN of 58 metres at 105mm. The inconsistent statistics mean it’s difficult to tell if one is meant to be brighter than the other. The recycle speeds are meant to be the same – around three seconds – and can be shortened by attaching a Nikon-type external battery pack.

Here are the manual MK930 and the automatic MK950 side-by-side: 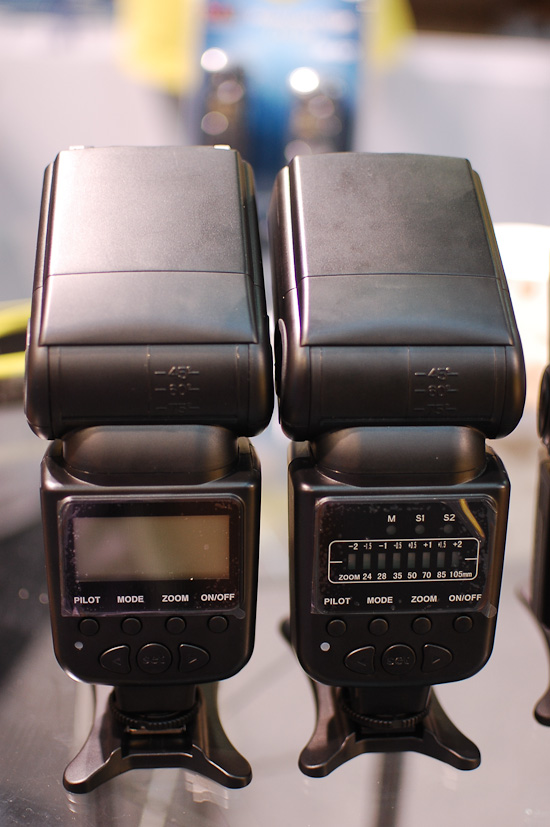 One complaint about MeiKe’s first flash was its apparent low build quality and occasionally faulty zoom head. We don’t know if these issues (assuming they weren’t one-off defects) have been addressed in the latest model. In Shanghai we were given a sample copy of the MeiKe MK430 – effectively a MK950’s features crammed into a smaller 430EX body – and it stopped working after just one day. Is there something lacking in MeiKe’s quality control, perhaps?

The MK930 was designed to compete with the popular Yongnuo YN560Â and matched it on paper.Â The MK950, on the other hand, sits somewhere between the YN-468 and the YN-565EXÂ in specifications, but with a YN-468 price.