The MeiKe MK900 is a $170 (Â£115) third party ‘clone‘ of the former flagship Nikon Speedlight SB-900. It sits opposite the MK580 for Canon. Having personally only used an SB600 and SB800, a comparison can’t really be given, but from all the pictures of the SB900, the MeiKe is a spitting image, with only a slight difference to get past any legal injunctions. 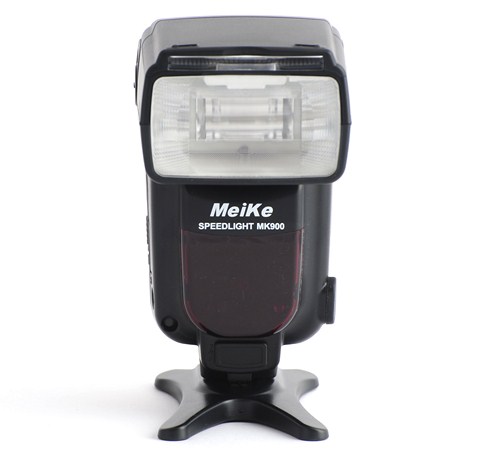 The MK900 can do i-TTL Mode, Manual, Stroboscopic mode and AWL/CLS. An optical mode can be used through S1/S2 mode, but there is no FP Sync (high speed sync) available from the flash. The MK900 zoom will match as closely as possible your lens if in Auto mode, but you can put it into manual and zoom between 18 and 180mm. Using the wide angle adapter will override this to 14mm.

Controls of the MK900 are laid out exactly like those on the SB900. The Buttons with labels do what they say they do, and the three buttons directly under the screen correspond to the functions at the bottom of the screen, using the circular dial to change the value of the function before pressing OK.

Use of Nikons CLS can be used and changed via the on button. The remote and master modes cant be used until you press the On button switch which then allows you to move it to your desired setting. The MK900 works with Nikon flashes perfectly whether it be a master or a slave.

The thermal cutoff works, when a temperature has been reached the flash wont allow it to be used until it cools which in testing was roughly about 5 seconds.

With the Nikon D700, when attached to the camera, the fastest shutter speed attained was 1/320 second, anything over that resulted in no flash being seen in the image.

The autofocus assist is available to be used, but like other MeiKe models, fires a geometric laser pattern that generally isn’t that useful. On the D700 I did find that if you have your focus reticle in anything other than centre position, then the focus assist wont fire. In auto point focus mode, then there is no problem.

Custom/menu settings are somewhat sparse. There is the ability to change whether it makes a beeping sound or not, whether pressing the test button illuminates or just flashes once, changing if the aperture can be adjusted manually or how long it takes to go into SLEP mode. 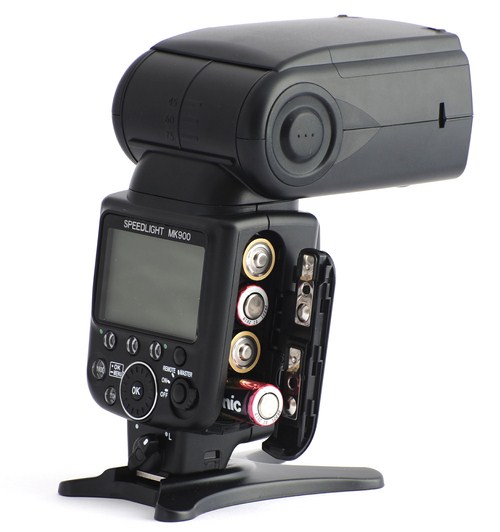 Build quality of the MK900 is pretty impressive. The unit feels solid, twisting and turning the flash head doesn’t feel like it will go too far or snap and the battery door is solid and shows you exactly how the batteries sit. Without fingernails, the cover for the sync port can be tricky, but does mean it wont be nudged off.