German manufacturer Metz are to start manufacturing LEDs and studio lights under its new Mecalight and Mecastudio brands. The firm has been known for its Mecablitz range of system flashes for over 60 years but in 2012 is expanding into new areas of photographic lighting equipment.

The Mecastudio name launches with two series of mains-powered monolight, the advanced Top Line and the entry-level Basic Line. Under the Mecalight brand there will initially be three models of AAA-powered LED video lamps.

The Top Line comprises the TL-300 and TL-600 flash heads, both of which have touchscreen controls (just like Metz’s new system flash) and Bowens S-type accessory mounts. Thanks to USB ports in the body of the flash, firmware can be updated via the internet. 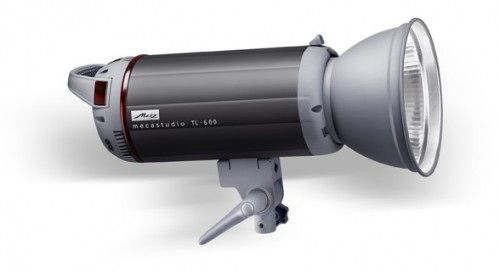 The Basic Line’s BL-200 and BL-400 monolights are less fancy, aimed at amateur photographers who “dream of owning their own photo studio”. These flashes are slightly less powerful and lose the touchscreen control panel, but still have the S-fit bayonet mount for attaching different lighting accessories.

While the Basic Line lights have the same six-stop power range and 1/10-stop precision as the Top Line, recycle time is a bit more sluggish, at around 2.0 to 2.7 seconds at full power. The most powerful modelling lamp you are allowed to fit is also only 75 Watts.

To go with both lines, Metz will have their own brand of Mecastudio light modifiers including reflectors, umbrellas, a beauty dish, an 80cm octagonal softbox and “ESB Easy Soft Box”.

For filmmakers, the Mecalight LED-480, LED-320 and LED-160 are “high CRI” video lamps powered by AAA batteries. The two brighter Â models have a dimmer switch to adjust the intensity from 0 to 100%, but the LED-160 has fixed output. Each unit is specified to emit daylight 5600K colour, which can be shifted to tungsten 3200K with an included filter. An option Flex Arm FH-100 provides the ability to join multiple Mecalights together in an array.

Prices and release dates are not out yet.