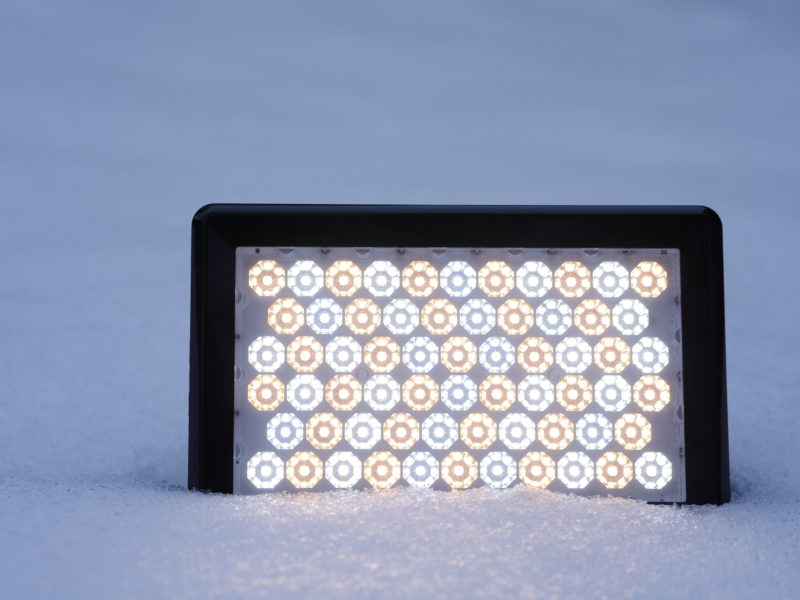 As light and camera sensor technology improve and as more people try shooting video, German manufacturer Metz Mecatech has diversified into LED lighting. The Mecalight L1000 BC is not the company’s first video light but it’s their first with advanced features such as adjustable colour and wireless control.

Metz were nice enough to lend me two LED lights to review: the L1000 BC and its ‘splashproof’ sibling, the L1000 BC X. These panels are designed for both on and off-camera use, for both stills and video lighting. Are they any good?

On paper, the only difference between the L1000 and L1000 X is that the latter is rated IP44 for dust and splash protection. Wherever this sealing has been added, it isn’t visible on the outside so the two panels look absolutely identical.

On the base and two edges of the panel are 1/4″-20 threads so you can mount it in landscape or portrait orientation on a tripod or light stand, or on your camera using the miniature ballhead and coldshoe foot that’s included. The top edge of the L1000 has a coldshoe to hold microphones or other accessories. 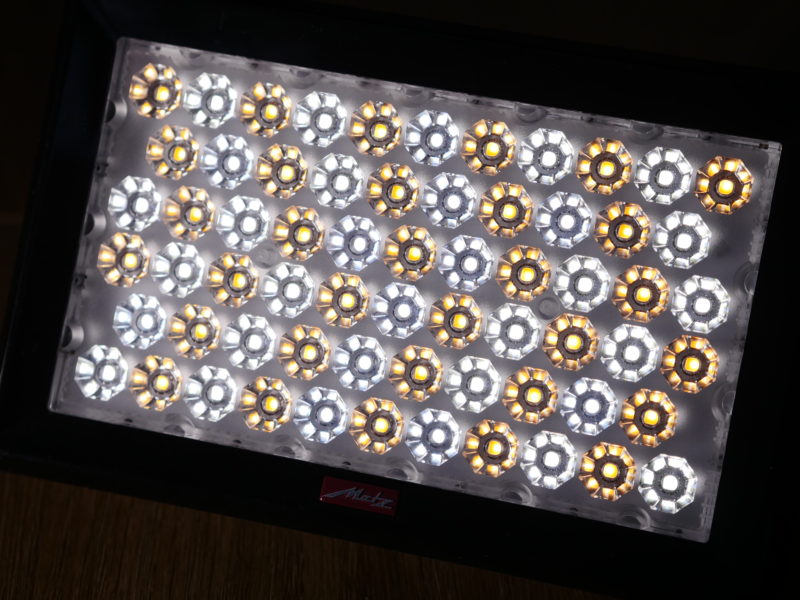 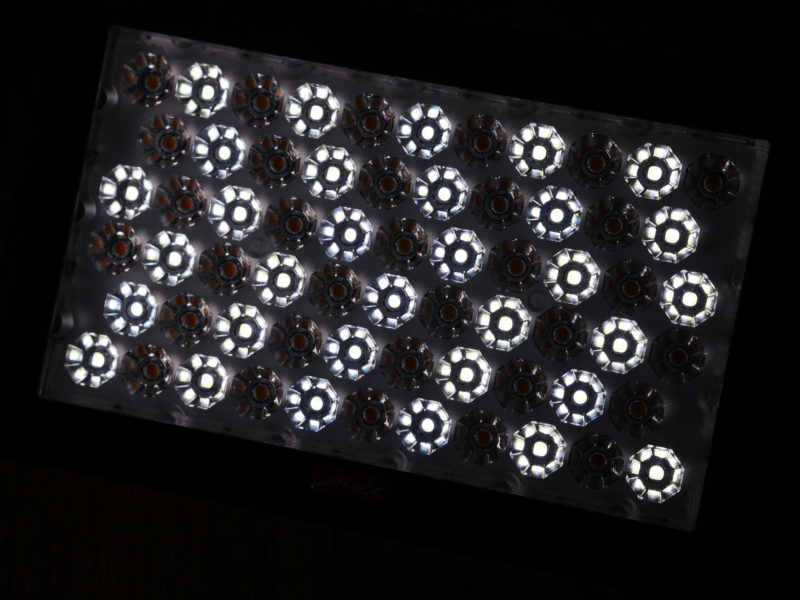 The primary power source is an NP-F style battery. You don’t get one of these in the box; instead you get the “Battery compartment P6”, a six-AA battery pack with an NP-F type connector. This sort of gives you the best of both worlds, and means Metz doesn’t have to supply batteries or a charger. The battery contacts are exposed to the elements on both the L1000 and the L1000 X. 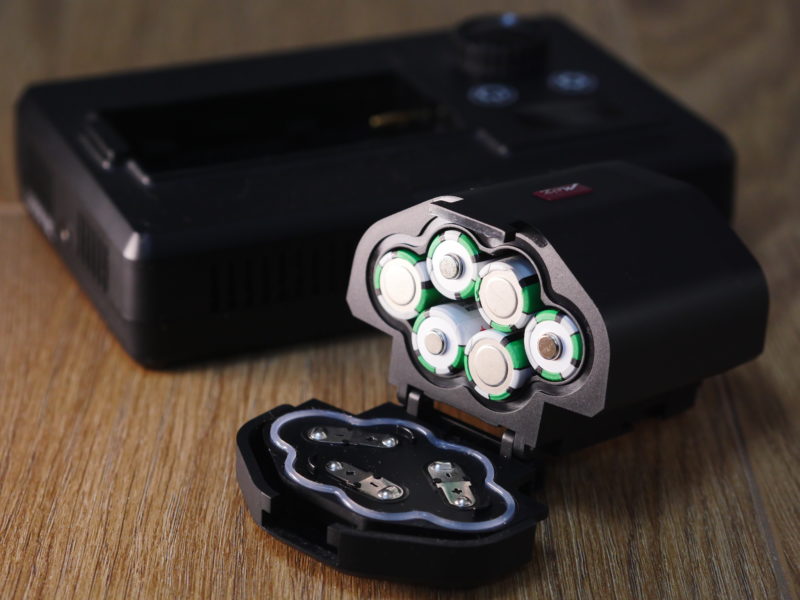 Controls are extremely straightforward: click the dial to change between power and colour adjustment modes, or press the settings button to change things like screen brightness, toggle Bluetooth on or off or (helpfully) display a QR code linking to a copy of the user manual. The display is modern, intuitive and clear.

You can pair your phone with the L1000 via Bluetooth and use the Mecalight Android or iOS app to adjust brightness and colour temperature. More on that later. 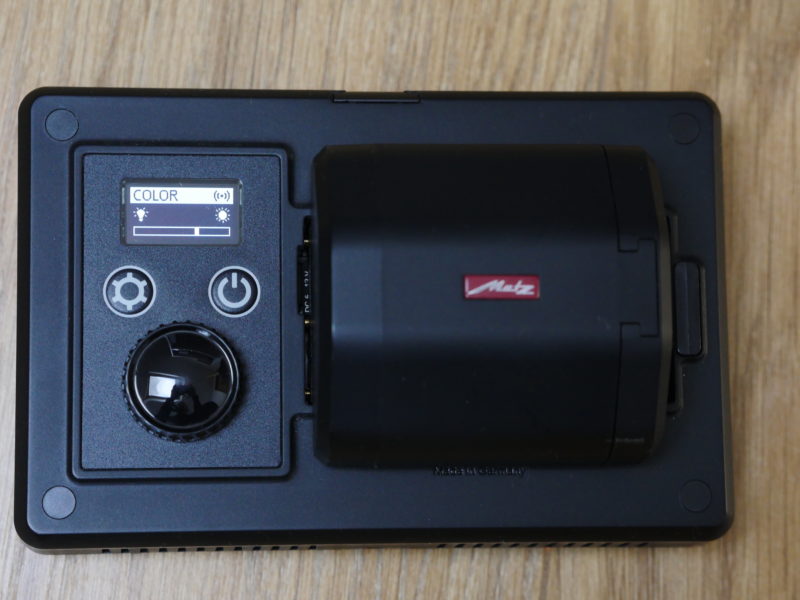 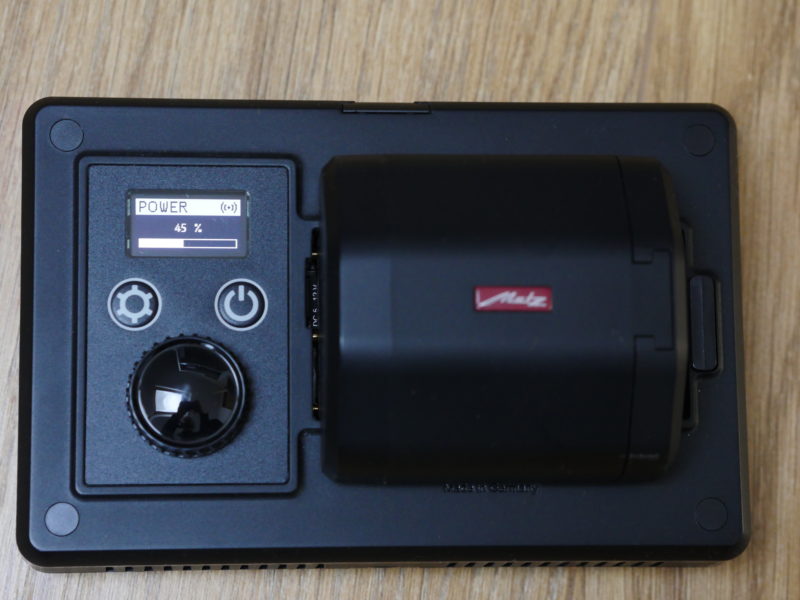 Unlike cheapo LED panels the Mecalight uses surface-mount diodes (SMD), which apparently are smaller, brighter and better at dissipating heat than older dual-inline package (DIP) type LEDs. This means you should be able to get a brighter light for the same size. 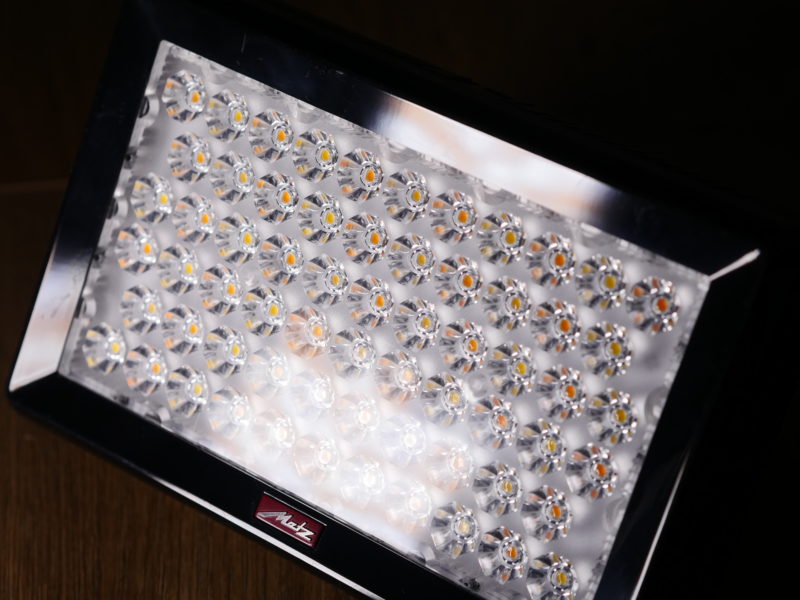 Is it worth paying more for the splashproof Mecalight L1000 X? If you are looking for weatherproofing, no — an IP44 rating is enough to stop your fingers getting inside the case, but not enough to survive a sustained downpour. Due to a design flaw (acknowledged in the manual), whenever the light is tilted forwards, rain can get in the vents at the top of the light without being able to drain away. 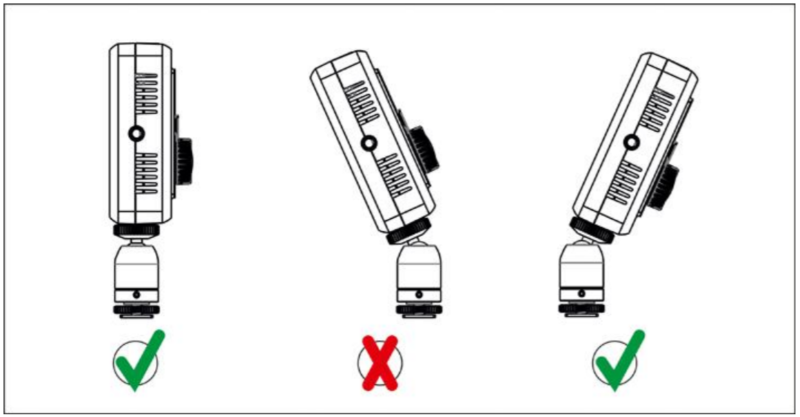 So as an outdoorsy, weatherproof light the L1000 X seems, to put it bluntly, dead on arrival. The only other benefit over the L1000 is that the â‚¬50-more-expensive L1000 X includes a Mecabounce Diffuser MBL-01. But you can buy this separately for â‚¬20 anyway.

The MBL-01 is a frosted sheet of plastic, held in front of the panel to soften the shadows created by the individual diodes. It is held in place with a little arm that connects to one of the tripod sockets. The Mecabounce Diffuser does exactly what it is supposed to do, but is hardly a deal-maker. I also wonder if it would be less cumbersome and more versatile to be able clip filters directly to the front of the panel instead. As it stands, there is no other way to add colour filters, barndoors or other light-shaping accessories.

There is also a micro-USB port, hidden behind a rubber stopper that you will lose instantly. When powered via USB, the Mecalight can’t quite reach full power. I didn’t really try this feature but it’s a nice option to have.

The Mecalight Android app is simple and straightforward to use. It connects to each panel via Bluetooth and lets you adjust the brightness and colour of each. Sometimes pairing was quite slow. 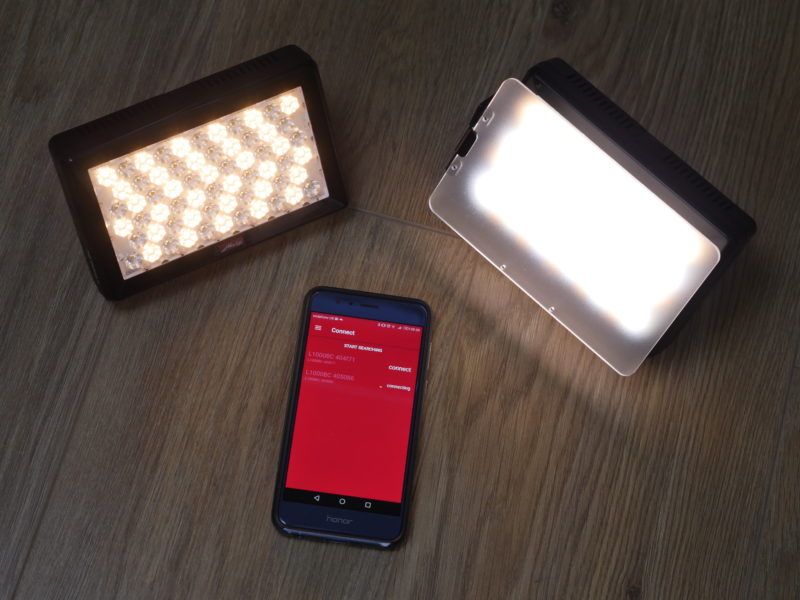 From the Mecalight Android app, it seems like you can adjust the L1000 in more precise 1% increments, but actually it just rounds the power level to the nearest 5%. Metz could improve the app by restricting the settings to 5% increments so there are no surprises (this is especially noticeable in the range 1–4%, which can either leave the light on or switch it off). The physical control wheel on the back of the Mecalights always increases or decreases power by 5%. 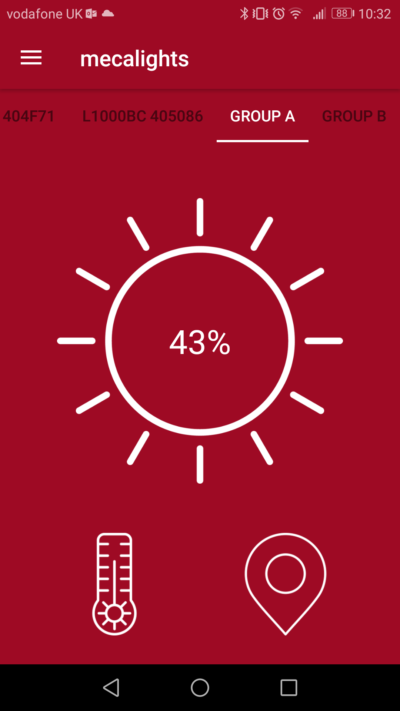 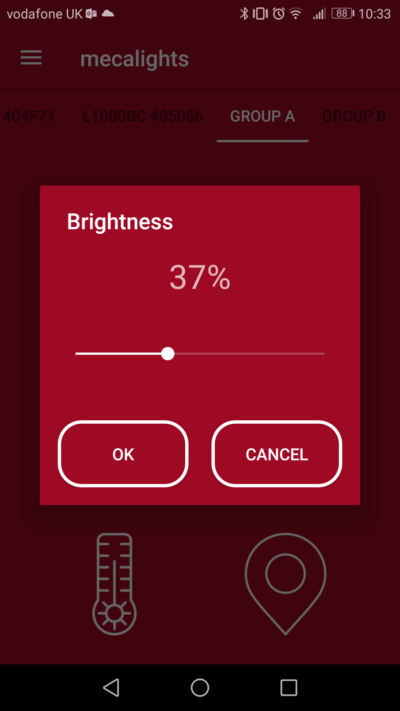 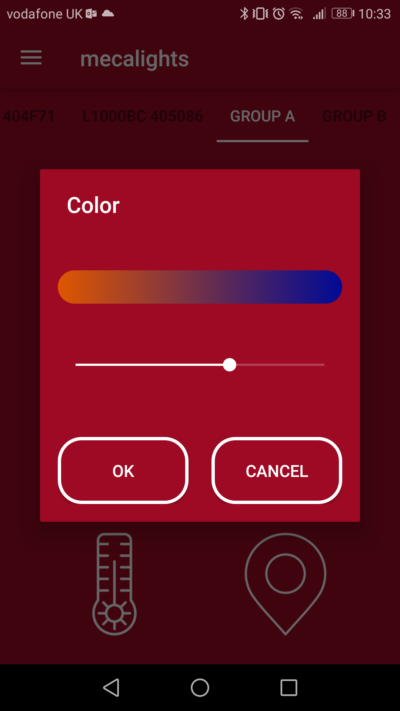 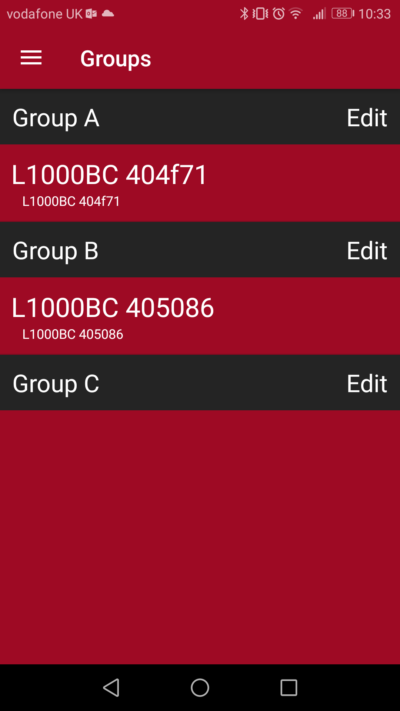 Neither direct control nor the Mecalight app specify Kelvin temperatures when adjusting colour — instead you just get a progress bar between tungsten (a light bulb icon) and daylight (a sun). It would be better for reproducibility if you could read off exact settings rather than having to remember “approximately two thirds of the way between tungsten and daylight”.

You can’t rename lights but you can tell which one is which by tapping the location symbol, which will cause the Mecalight corresponding to that ID/Group to blink once. However this works by switching the light off for a moment and back on – if the light/group is current set to 0% power then nothing will appear to happen. This could be a bit confusing if you start with all your lights switched off and want to add them to your scene in stages.

Specified brightness is 1000 lux at 1 metre. In unscientific conditions, I measured 8 EV, or 640 lux at full power and 3.9 EV / 38 lux at minimum (5%) power. This was consistent at all colour temperature settings, from daylight to tungsten and every mix in between.

There was no flickering at any power setting, or any noticeable colour cast. I don’t have a colour meter but ‘daylight’ and ‘tungsten’ colour settings seem to match my camera’s white balance settings well enough.

Even at full power, the lights barely get warm to the touch.

At the moment I don’t shoot much video, so the Mecalights were put to use in several continuous-lighting stills photography setups. The impressive brightness and easy colour temperature control made it easy to use the L1000 as a secondary light alongside more powerful Nanguang LED fresnels. The brightness is enough for fill or accent lighting with a studio light as the key light, though the lack of barndoors make it hard to control flare when used as a back light.

Without the MBL-01 diffuser, the individual diodes each cast their own shadows, which can be distracting in hard light setups. Unless you are a run-and-gun video shooter, the Mecalights are a bit harsh and dazzling as direct main lights but I did experiment with bouncing them off walls and through sheets of material, for which I was able to eke out just enough light at high Iso-sensitivity and wide apertures.

The L1000s don’t stack together, which is a shame as this could give the extra brightness needed for serious stills work. Moreover, there is no non-“BC” single-colour version, which might provide an extra stop of light at the expense of easy colour control.

One nitpick I have is that the large battery pack makes the device back-heavy, so it won’t stand upright on a shelf without tipping over (unless you slide some books under it).

The Metz Mecalight L1000 BC and L1000 BC X can’t be faulted as simple, bright and easy to control on-camera LED lights with a range of power supply options. They are small, lightweight and put out a lot of light. The bi-colour adjustment helps match the light to the ambient conditions. 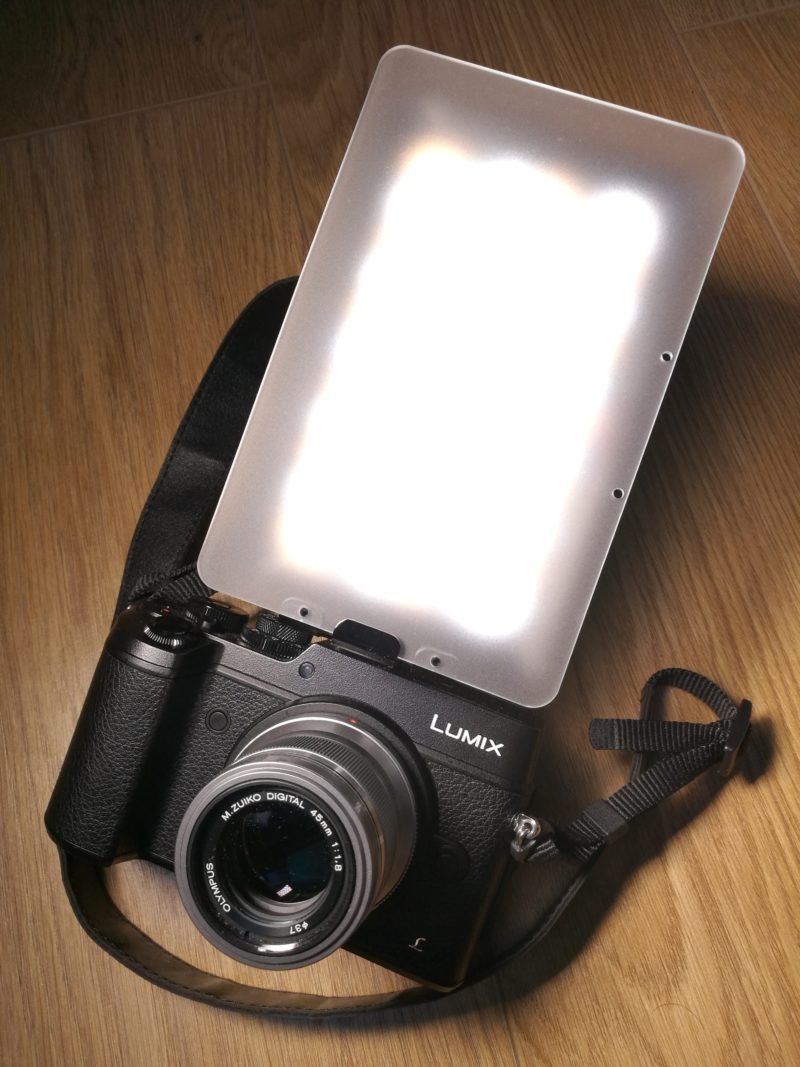 Despite touting the L1000 BC X as the more weatherproof option, it’s not got enough protection to be worth the full â‚¬300, versus the â‚¬250 L1000 BC. The lights work well enough off-camera alongside other lights, but you will need more light-shaping accessories before being able to switch to a Mecalight-only kit.