I have been playing with Metz’s pint-sized flashgun, the Mecablitz M400, for the last few months.

The M400 fits into the same niche as the Nissin i60A (and i40), the MeiKe MK310 and Godox TT350. That is, it is a small-form factor shoe-mount flash with features more conventionally found in big, flagship flashes.

Unlike the Godox and the Nissin, the Metz doesn’t have built-in radio functions, but it has just about everything else you could want in a system flash, including full manual control, wireless optical master and slave modes, TTL, a fully tilting, swivelling head and a bonus video light. More impressive still is the range of cameras this little flash supports: it’s available for Canon, Nikon, Micro Four Thirds, Pentax, Sony and Fujifilm.

I was sent the Micro Four Thirds version, and have been testing it with my Panasonic Lumix GX7. Some features are camera-dependent, so your experience with other flashâ€“camera combinations may vary.

Whereas Nissin decided to go with a more retro-styled design featuring a physical mode dial, the Metz M400 is thoroughly modern, with a sleek, distinctive appearance. Everything is controlled from a futuristic-looking OLED screen and an accompanying directional pad.

Despite what might look like a fairly spartan set of controls, the Metz M400 is packed with more features than you could possibly imagine. You can customise everything from displaying distances in metric or imperial units, to adjusting the brightness of the display, toggling sleep mode, the AF-assist beam and more.

Though unconventional, the user interface is clear and intuitive. Only one or two things had me reaching for the manual. Speaking of which, there is no printed booklet supplied in the box; you get the flash itself, a soft drawstring case and a tabletop stand that doubles as a tripod mount.

There are half a dozen different operating modes available in the menu, though this varies according to whether you have the flash on or off-camera.

I mentioned that no manual was included in the box, but that doesn’t mean it’s unavailable to you: in the settings menu of the flash is a “Manual” option, which when selected displays a QR code on the screen linking to an online PDF of the user manual. This sounds like a great idea, but I realised I never use QR codes and it was quicker to type manuals.metz-mecatech.de into my browser than to find an app that could read them. Nonetheless, a nice touch.

The instruction manual is quite clear and well laid-out, though contains a few trivial typographical errors, as well as (at least in the English and Dutch sections) one or two clauses that they simply forgot to translate from German â€” I understand what “Synchronisation ohne Vorblitz” means (page 141) but maybe not everybody will.

Specs-wise, the manufacturer promises recycle times as quick as 1.5 seconds with NiMH batteries at full power. I measured around the same. There is no way to speed this up, as there is nowhere to plug in a high-voltage battery pack. This isn’t really meant as a machine-gun type flash, though.

The LED seems pretty bright, but I really don’t do much video work so never really used this in anger. I’m not sure who really uses these but I guess it’s nice to have.

There is no audible whine when the flash recycles and I only had to change the batteries after heavy use.

One thing that I wasn’t able to get working was high-speed sync. On my Panasonic GX7, I obtained clean frames up to 1/400 second shutter speed, then feathering at 1/500 second and gradually increasing black bars until a completely dark frame at 1/2,500 second. Then, switching from M mode into M FP mode, exactly nothing happened â€” I got exactly the same results. Synchronisation was similar in TTL versus TTL FP modes. Perhaps the GX7 doesn’t support high-speed sync or I am doing something wrong. It didn’t bother me but you might want to check this carefully if HSS is important to you.

Another minor niggle: there appears to be no test button on this flash. The only way that I could get it to fire a test pop was via the test button on a radio receiver attached to the hotshoe, or by simply taking a photo. 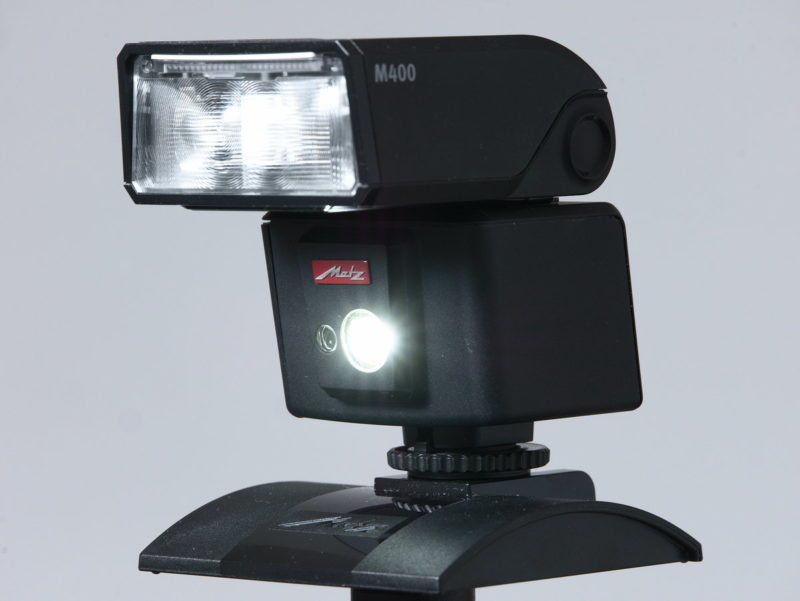 Overall I found the design of the M400 very appealing, the performance satisfactory and the weight and size of the unit itself complementing my small Micro Four Thirds cameras rather well. The head swivels 180° left and right, which makes this very usable as an on-camera flash for events photography, and as an off-camera flash it produced easily enough light for the simple situations in which I tried it.

I was a big fan of the Nissin i40 as an on-camera flash and the Metz M400 is even better, offering more precise controls and advanced features at a slightly higher price point of Â£200. I would highly recommend it if you’re looking for a flash to use on-camera with a small mirrorless system.

Even smaller (and cheaper) flashes are available, such as the Godox TT350 and MeiKe M320, but these only take two AAs so are less powerful. Panasonic’s own offering, the FL360LE, is about Â£50 more expensive and not nearly as compact.

That said, I don’t use TTL very much and mostly use flash off camera, where size is less important. As such I would probably go for a slightly beefier manual flash, but that’s my personal preference rather than anything against the M400.

Thanks to Metz Mecatech for supplying us with a sample unit for this review. For more information, visit the manufacturer’s web site.