Multiblitz have announced the release of their 2400Ws studio generator, the Xpac 24AS. The pack, designed to be both compact and powerful, is aimed at working professionals, with “consistent power stability” and “exact repeatability” to meet the demands of commercial photography. It supports two high-end flash heads and runs from the mains.

On top of the Xpac 24AS’s rugged aluminium case is a digital control panel with a “logical and intuitive” layout. From here you have access to all the settings including power, modelling lamp control, optical slave mode, ready beep and so on. You can also make adjustments from afar thanks to a built-in TriggerHappy receiver, which supports “Easy-Clip”, a function that fires flashes selectively to aid creation of clipping masks. The pack weighs 7.5kg and measures 400 by 225 by 175mm.

The Xpac can run two flash heads with power levels of each socket set independently (10 or 11 stops depending on the channel). You have the choice of BL 41 or BL 24S lamps, with 1/4000 sec and 1/6000 sec flash durations respectively and a choice of cool or daylight-balanced colour output. Each can also support powerful modelling lamps up to 650 watts. The heads weigh 3kg and accept the full range of Multiblitz V-mount light modifiers.

If you really wanted to compare the output of this setup to a speedlight, a head with standard reflector gives metric guide number (GN) of 181, the manufacturer says. Recycle times are between 0.05 and 1.2 seconds. 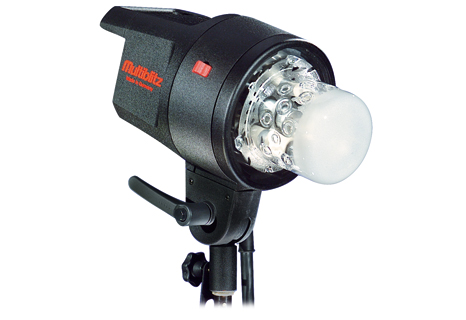 Multiblitz’s Veit Wulms said the Xpac 24AS is “a very nice product, very light, very cool, nice features and a lot cheaper than other generators in its class”. Originally announced at Photokina last year, the Xpac 24AS is now shipping to dealers. The manufacturer’s suggested retail prices are as follows:

Herr Wulms said the company will “wait for the response on the European market” before releasing a 120-volt version in the US. For more information, visit Multiblitz’s web site.