Chinese studio equipment manufacturer Nicefoto has launched a new version of its flagship portable studio flash. The N-Flash, a battery-powered monolight, is now available in a High-Speed Sync (HSS) edition, supporting wireless triggering at fast shutter speeds thanks to an integrated 2.4GHz module.

For the uninitiated, the Nicefoto N-Flash is a location lighting solution, one of the first self-contained flash heads on the market to feature an integrated, removable lithium-ion battery pack (as opposed to a separate pack connected via cord, or using a mains inverter). The unique range of features, including a hand grip, hidden handle and carrying strap, makes it well suited for use outdoors. 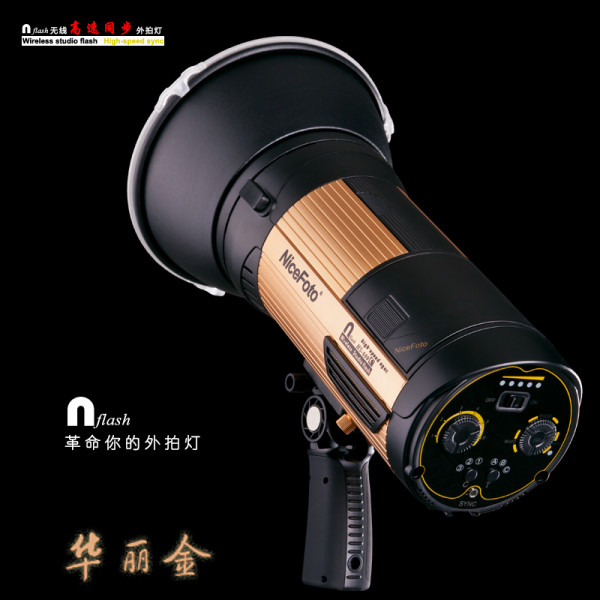 Though every N-Flash since the first has had a basic radio receiver built-in, this one is compatible with a variant of Nicefoto’s latest high-speed-capable wireless triggers, allowing the flash to be used at fast shutter speeds up to 1/8000 second. The HS-316 appears to be a restyled TTL-316 transceiver, possibly with the TTL part taken out. For now, the HS-C is suitable for Canon. No word on support for Nikon or other flash protocols.

There are now a whole host of N-Flashes to choose from, with different power ratings, control systems and accessory mounts to suit different needs and different markets. The HSS version, however, adds new functionality which should make it easier to overcome bright sunlight or achieve action-freezing shutter speeds while shooting outdoors.

Unlike the models we have reviewed in the past â€” the original 480A and the 2013 edition â€” the High-Speed Sync N-Flash has mechanical knobs for power control, and no LCD screen. Looks a bit less high tech perhaps, but should be quicker to adjust, maybe cheaper and more resilient.

This new feature sets the product directly against the Priolite Hot Sync, another Bowens-mount lithium-powered HSS monolight which additionally offers remote power control â€” but at a higher price. The Profoto B1 has a similar form factor. Do you think Nicefoto could give Priolite and Profoto a run for their money? Share your thoughts in the comments below.

Not fussed about HSS? Check out our reviews of the original N-Flash 480A and the updated 2013 edition. Or find out about where they’re made.

Retail pricing and availability have yet to be announced. For more information, visit the manufacturer’s web site.