Magneflash have brought out the Splash battery-powered monolights, manufactured in the UK. The new M30 and M40 series studio flashes are designed for a range of applications including portraiture, still life, weddings and location photography. 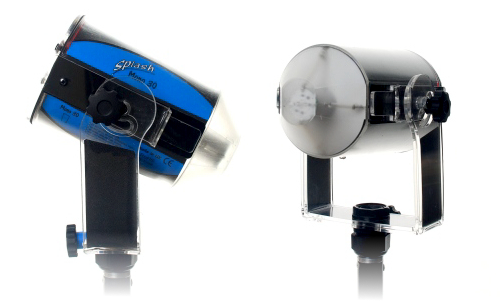 According to Magneflash, the internal electronics inside the Splash are unique. The M30 series has eight separate flash tubes in the head and the M40s have 12. By “superimposing one complete flash on top of the other” the Splash’s method for adjusting power level provides more consistent colour than either IGBT speedlights or conventional voltage-controlled studio flashes. The flash duration is always the same, a fixed 1/4000 second.

When the Splash is at 50% power or less and has its optical slave switched on, it will track pre-flashes from TTL speedlights, firing at the same power level on each pre-flash as it does during the actual photograph. As a result, the camera’s exposure calculations take the Splash’s contribution into account, allowing you to use your camera in an automatic setting such as Shutter Priority program mode.Â For further explanation of how this works, visit the Magneflash web site.

The monos are also said to be capable of “high speed repeat firing… much faster for the power than speedlites”.

Each of the five different models in the Splash line-up is weather resistant and has a built-in rechargeable battery, making them well-suited for use outdoors. All have optical slave cells and the Splash Mono 40LWT adds a radio receiver compatible withÂ HÃ¤hnel Combi TFÂ wireless flash triggers. The M40L and above have LED modelling lamps.

A Bowens S adapter is available to mount third party modifiers. Magneflash also have their own 50*50cm collapsible softbox called the Airobox 50, which costs Â£72. More information on accessories can be foundÂ here.

Peter Louden, a former employee of Bowens and Calumet, is the man behind the new studio flashes. He formed his own company ten years ago, until recently working the USA on specialised technologies for medical and 3D image lighting. Following a test of the concept at the Focus On Imaging trade show in March 2011, the Splash monolights were launched in January this year.

“They are new and we believe the concept is new…Â For me, the most important aspect of off-camera flash is optical compatibility with studio flash, hence the tube arrangement. The multi-tube feature makes for a complex unit electronically but at the same time allows simple operation.

“I donâ€™t know of any [rival] units to compare Splash with â€“ I suppose thatâ€™s the point.”

So far, the new products have received mixed reviews. Photography web site ePHOTOzineÂ criticised the Splash Mono for its “hand-built… Blue Peter finish” and lack of audible ready beeps, but praised the “very good” colour balance and quick flash duration. Bugs with consistency have since been fixed in the latest models.Â Amateur Photographer – a UK print magazine – gave the Splash Mono 30 a rating of four stars, calling it “a delight to use and simple to operate”.

At the time of writing, the only place you can purchase a Splash Mono is directly from Magneflash. For more information and to buy, visit theirÂ web site.