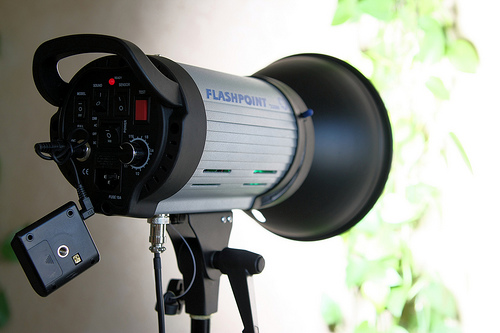 Adorama are working on some new own-brand lighting equipment, expected to be officially announced and released next year.

The first product is a Flashpoint brand wireless flash trigger. Â A prototype of the wireless transmitter was tried out by photographer Andy Samirez during New York Fashion Week, along with the Pentax Q mirrorless camera. You can read more about that testÂ here.Â On-the-record details are scarce so far, but we are told “the hope is that it will kill two birds with one stone”. Still in the testing phase, it should be ready around February.

There will also be “aÂ new Flashpoint monolight that has special capabilities”. We are told it will not replace the existing M-series AC/DC flashes, which won Lighting System of the Year award in PDN.

Since Adorama’s existing own-brand studio flashes are manufactured by Mettle, it’s possible we could see an IGBT Flashpoint monolight based on the Mettle DR series.