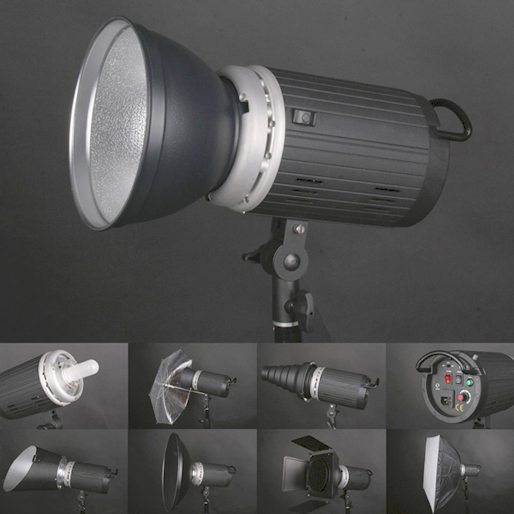 UK-based eBay seller CotswoldPhoto has announced a new series of monolights to be released in June.

…Also on their way to me are some 600W studio strobes toÂ sell for Â£149Â inc courier delivery and VAT in the UK, about Â£10 extra for some EU countries.

Uses Bowens S bayonet fittings. I will have standard and umbrella reflectors to match at under Â£10 each.

They are a new design and feature the stand holder from the same stable as the umbrella holder we sell. If they go OK we also will sell 300W and 400W, at Â£99 and Â£129 each.

Plus, an update on the recently released CLS65 light stands:

The reflex stands went so well we have nearly sold out what was to have lasted 3 months â€“ in 6 weeks. Oops. We have made a few changes as a result of customer feedback. Our next stock will be here with the lights in June. Meaning we will be out of stock for about 4-5 weeks. I have ordered a much bigger batch this time!

The new lights have the following specifications:

Also released: an improved version of the twin hotshoe-to-3.5mm adapter. It is designed to allow you to fire two speedlights at once into an umbrella. Triggers can be plugged into the 3.5mm miniphone port. It has a Nikon locking hole.