The Speedbox is a new kind of portable folding softbox designed for hotshoe flashes. It is made by Rime Lite of Korea – better known for their high quality studio flash systems and Grand Softboxes. 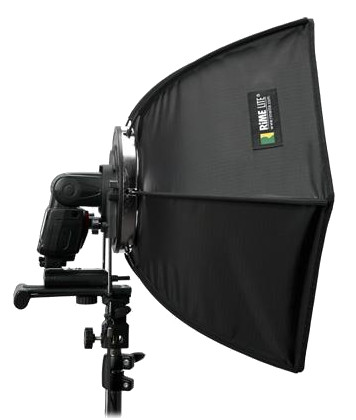 Hexagonal in shape, the Speedbox measures 50 centimetres across and weighs a feathery 0.7kg.

Unlike the ubiquitous low-costÂ umbrella softboxes and Westcott Apollo clonesÂ from China, the Rime Lite Speedbox points in the same direction as the flash head. It has a mounting bracket specifically shaped to fit hotshoe flashes, similar toÂ “Easy-Fold” speedlight softboxesÂ and theÂ Aurora Firefly.

Contrasting with the aforementioned alternatives, you don’t pop up the Speedbox or open it like an umbrella. Rather, you quickly raise the canopy using conventional rods that click into place.Â Once put together for the first time, you can collapse the Speedbox without removing any of the poles.Â The advantage of this system over the Aurora Firefly is that there is no bulky metal umbrella slider blocking the front of the flash head. This, combined with the double diffusion panels, should provide an even spread of light.

Every feature of the bracket is adjustable, allowing different size flash heads and even wireless flash triggers to be accommodated. A grab-handle on the rear makes it easier to adjust the tilt angle when setting up.

The company behind FlashWave triggers,Â SMDVÂ – who are also Korean -Â make a very similar softbox. It is called the Diffuser-50 and you can find more details about it here.