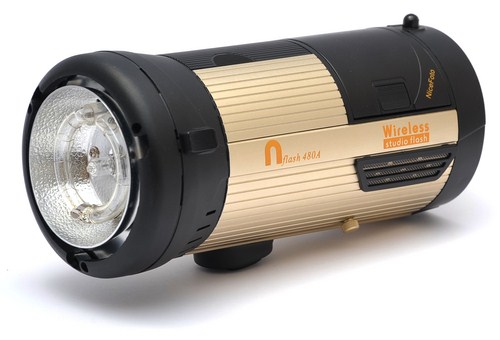 We’ve been trying out the N-flash 480A, a battery-powered IGBT monolight from Nicefoto. The N-flash represents a potential revolution in photographic lighting on location. With an integrated lithium ion battery pack and a built-in radio trigger, it is what it says on the tin: a wireless studio flash. For technical specifications, see the original announcement article.

Firstly, the controls. The power levels – 1/1, 1/2, 1/4, 1/8, 1/16, 1/32 & 1/64 are cyclical, so you can go straight from 1/1 to 1/64 and vice versa. Unfortunately there isn’t any finer adjustment than this; change your camera settings or lighting position instead. The menus are very straightforward so there is little to be gained from describing them in detail here. One quirk we noticed is that the up button decreases power and the down button increases it. When I put this to the manufacturer they said, “It is not an error; it is just adverse to users’ habit”. If you say so!

Beyond your bread-and-butter Manual mode there is also FP mode and Multi mode. FP, despite the name, is not really anything like high speed sync on Canon & Nikon speedlights. It’s more of a “super fast flash duration” setting for close-up high speed photography – you know, capturing balloons popping, bullets slicing through apples and so on. Multi mode is a stroboscopic mode where you can change the number and frequency of flashes. You may never use these specialised functions. 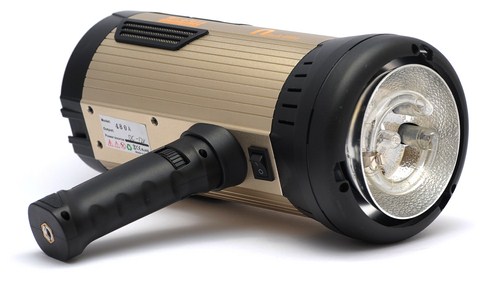 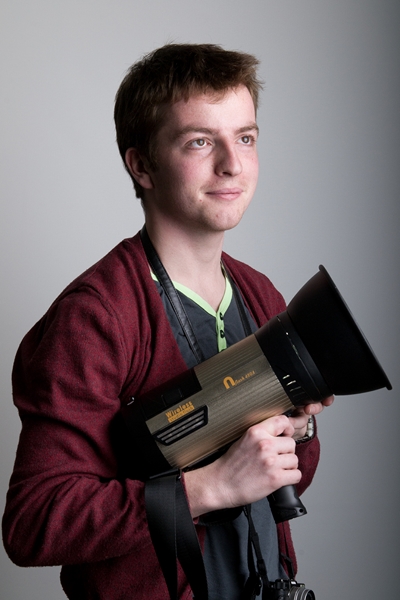 The N-flash kit comes with a handle bracket, but not a light stand bracket. There is one sold separately. Nicefoto sent us one anyway to try out, but we encountered problems with it, either due to design problems, quality control or both. With feedback from us and other testers, the manufacturer are revising this accessory, so it should have changed by the time it goes on sale. In the meantime, we used the handle bracket and this third party umbrella bracket, both of which do the job nicely. 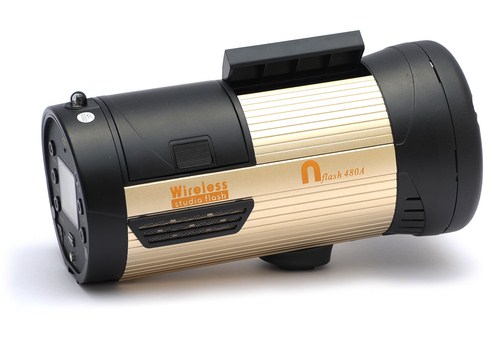 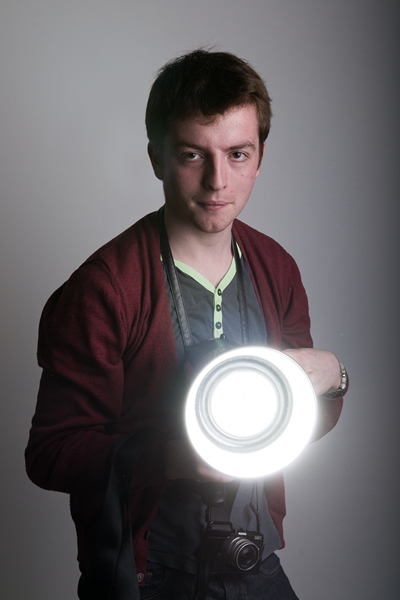 To help your voice-activated light stands (photo assistants) further, there is a removable shoulder strap and a “hidden handle” which flips out of the the top of the “barrel” of the n-flash. This comes in really useful and adds to the impression that the designers have done a good job at thinking this one through. It’s no featherweight, but you can still comfortably hold the flash for long periods thanks to its ergonomics. Occasionally, though, if we had non-photographers hold the N-flash then they would accidentally knock the power switch, or the quick-release on the Bowens mount. This could cause the flash to switch off or the softbox to fall off the front without warning. 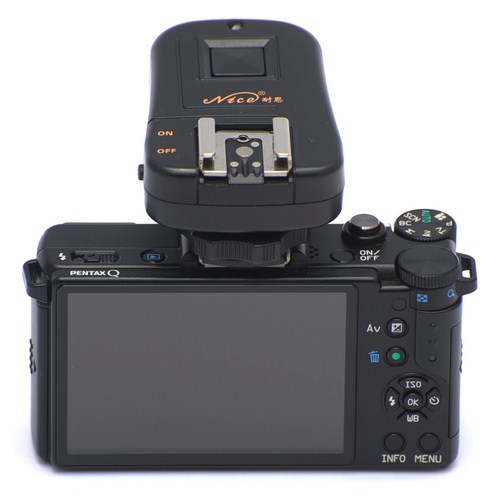 During our shoots, the Nice radio trigger worked well on the Pentax Q, but with the Nikon D3100 there was black banding across half the picture at 1/250 second shutter speed. Reliable exposures can be obtained at 1/160 second. So, not the quickest trigger on the block, but still convenient. The option remains to use third-party wireless remotes or the built-in optical slave.

Our first set-up, as part of a varied shoot for Edinburgh-based fashion designer thenewblack, had a Jinbei DPs-III 500 in a large softbox for the main light, cross-lit with the Nice N-flash in the standard reflector. Setup shot follows. 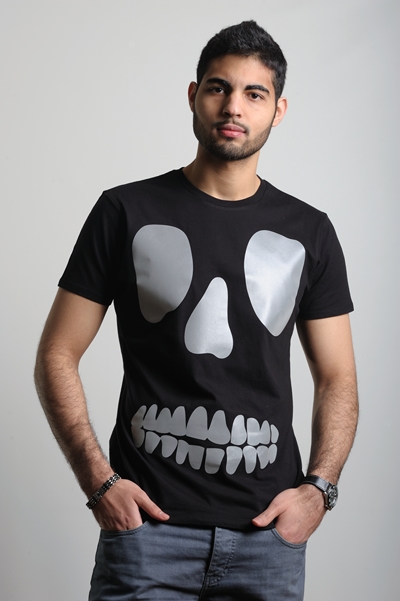 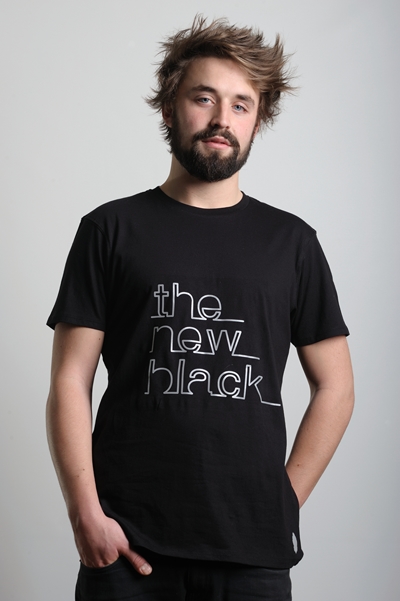 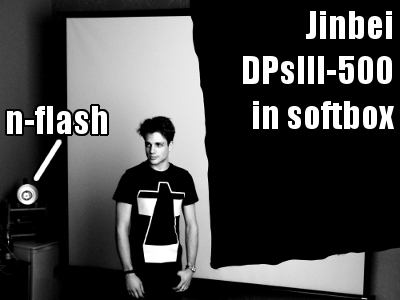 Our other scenes were single light set-ups using just the N-Flash as the main light source. In this bedroom series, I stood on a ladder holding the n-flash in a large softbox. 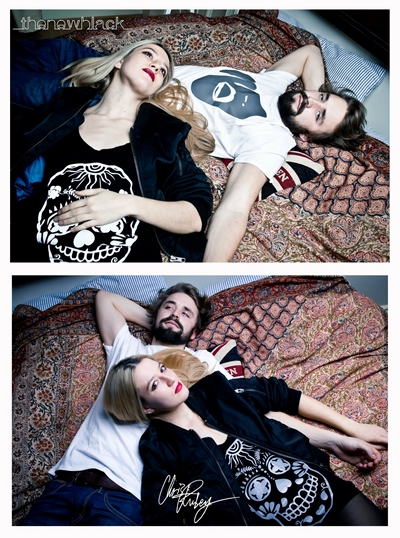 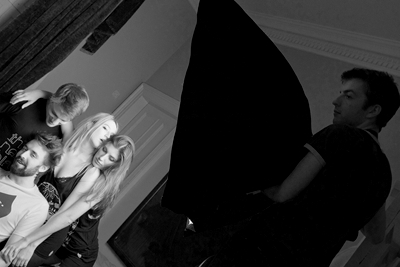 On the stairs, the photographer stood behind the models, shooting into a mirror in front of them. The softbox was held by an assistant further down the staircase. 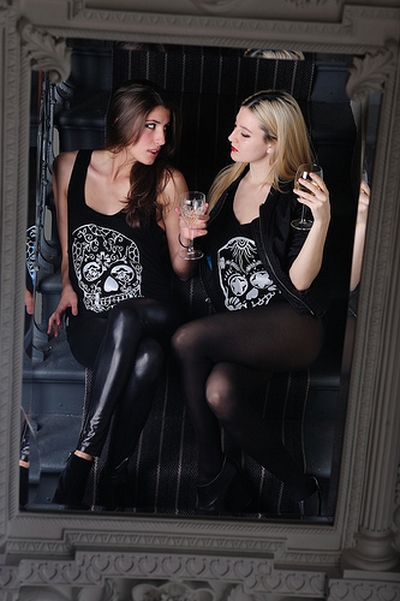 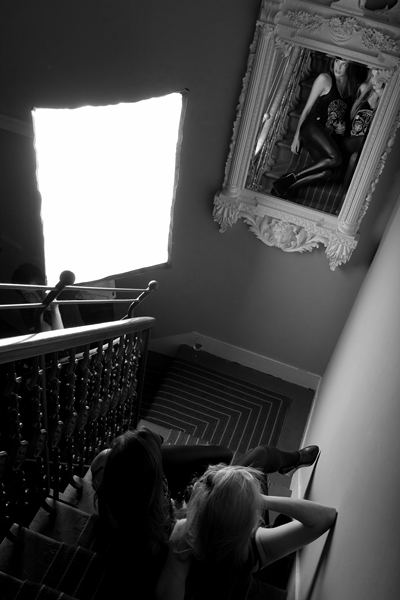 For this bathroom scene, the softbox was removed in favour of the standard reflector, with the light positioned to the left of the camera. Here we found another advantage of the wireless studio flash – no need to worry about water on the floor. 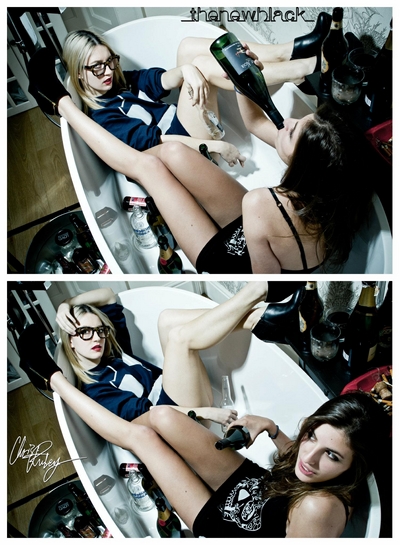 Shooting hundreds of images, the battery performed like a champ. Recycle speed didn’t slow down at all. It was just as well, as we didn’t take the charger with us and we don’t have a spare! Every shot was triggered using the proprietary Nice radio trigger, with zero misfires and no unusual behaviour from the N-flash at all. Overall, this is a unique location flash and I’d recommend it. Watch out for heavy modifiers though.

Following numerous requests, I’ve been testing the quantitative side of things with the n_flash. Manufacturer specifications can’t always trusted so it’s important to know how powerful this flash really is, how long the battery lasts and the consistency of the light it emits..

One of the crucial things photographers need to rely on is colour consistency. If their lights do not match each other or do not maintain colour from shot-to-shot, the resulting images will vary and make post processing more difficult.

As the flash power level was reduced, the n_flash 480A’s colour temperature varied by a total of around 500 Kelvin. At 1/64 power the light appears slightly bluer than at full power. 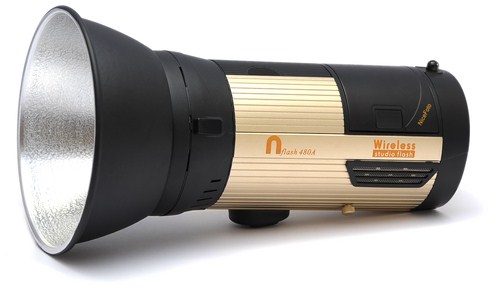 I tested the intensity of the flash to see if the actual guide number (GN) matches up to the one specified by the manufacturer. First I measured the output with the kit reflector attached, then without. Guide numbers are a pretty poor way of comparing studio flash units, but we were able to get results reasonably consistent with the manufacturer’s stated GN of 56. What’s more, the n_flash is very close in intensity to the Jinbei DPsIII-500 – which makes sense – 480J isn’t far off from 500J.

Flash duration is a measure of how easily the light can freeze action. Since the n_flash uses IGBT circuitry, the pulses get faster as you decrease the power levels. This is a feature in common with speedlights, while conventional voltage-controlled monolights experience the opposite effect. Using an oscilloscope, the following measurements were made (rounded to two significant figures).

There is also an “FP” mode in the n_flash, designed for high speed photography. The settings go from “FP” to “F5”, with FP the fastest and F5 the most powerful. I obtained these readings.

The final thing I tested was the battery capacity. Nicefoto claim the 480A is capable of a whopping 680 full power flashes. I set up the n_flash with an intervalometer and obtained exactly 667 pops (each spaced 7 seconds apart) before the battery died. This suggests the manufacturer’s figure is pretty much spot-on. At the end of the test the battery and flash unit were quite hot, since there is no cooling fan. But it looks like you’re likely to run out of juice before you get any problems with overheating. 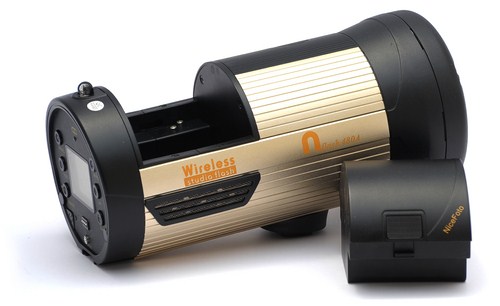 After I let the battery cool down I put it back into the n_flash and squeezed another 15 shots or so out (the red low-battery indicator glowing all the time) until the unit switched itself off again.

The n_flash takes around 2.5 seconds to recycle from a full power flash. At half power and lower, recycling is instantaneous (unless you fire off a rapid sequence that adds up to a full load, of course). Over time, recycling speed does not noticeably slow down, even when the battery is nearing depletion.

The Nicefoto N-Flash 480A is on sale now for US$500, shipped internationally from Hong Kong. In the UK, it is distributed by Mr Cad. In Australia, customers interested in purchasing the N-Flash can contact Nicefoto’s distributor, Mark Shapiro onÂ [email protected].

For more product views, visit nflash.cn. Questions, comments? Have your say in the comments below.