Quite a while back we wrote about various LED lights with Bowens mounts, allowing photographers and videographers to use their accessories designed for monobloc flashes for video lighting as well. The efficient LED technology produces relatively little heat, making it possible to use them in softboxes without the risk of igniting or melting the material â€” a major limitation when using tungsten light bulbs. Additionally, the more efficient light output makes it very interesting to consider LED lighting for video.

Sounds great, but how usable is it in practice?Â To test the practicality of Bowens-mounts LED lights, Martin Stonard, a Munich-based photographer from The Film CreativeÂ hasÂ helped us to review the NiceFoto 1500A, a 150-watt bi-colour LED with an S-fit bayonet.Â

At 315 dollars, it is a cheap alternative to other lights on the market with high power, but what are you exactly compromising on?

When opening the box, one thing is obvious, the NiceFoto 1500A, with its gold-colored body, certainly stands out. The light came very well-packed in a cardboard box with polystyrene inserts made to fit. The package also contained a long IEC power cable, a clip-on diffuser for the light and a nifty little remote control with a keyring attachment (battery included, for a change).

Claimed is a power of 150 watts coming from 48 individual high-powered LEDs. Due to the high power and high number of LEDs, a cooling fan is required, and the moment you plug in the light you will notice that it starts spinning. Unfortunately they did not manage to cool the light passively. The light can be plugged into outlets with different voltages.

The remote control can power the light on and off, as well as controlling the brightness of the light. This is a great feature that allows users to evaluate the light from behind the camera, and adjust the light accordingly.

The back of the light has a digital display that indicates the power. It also has a dimmer control, a colour temperature dial (from 3200K to 7500K according to specs), a standard power switch, and the socket for the IEC (kettle) cable. Nice and simple, it seems to work rather well. The remote overrules the current setting made with the dial but when a change is made with the dial, the dial overrules the remote again. 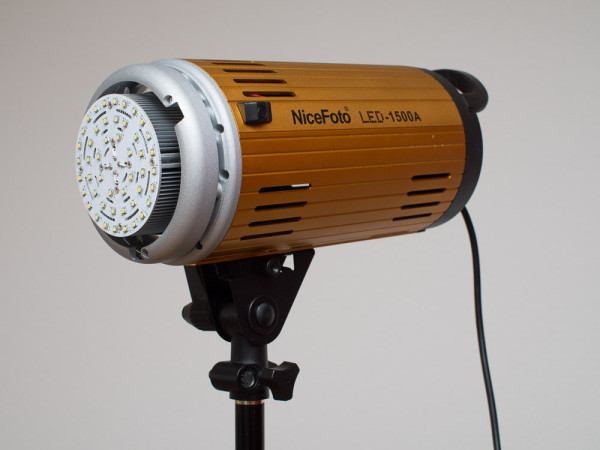 On first impressions this light is very well-built â€” straight out the box it feels solid and very well made. The bracket that attaches to the lighting stand itself is metal (unlike a lot of cheaper monoblocs) with teeth to grip when adjusting the angle, and when on the lighting stand, the light is well balanced. Worthwhile to mention: the bracket itself has space for a umbrella as well.

I initially was very excited about the Bowens mount, given that I have a number of beauty dishes and soft boxes. Without question, when these are mounted you must a rather sturdy lightstand or you are forced to sandbag your stand to make it more sturdy. At 3.5kg is it certainly not the lightest light you have used.

Tests I made with the beauty dish and honeycomb were actually disappointing. The light didn’t seem to spread as far as it would on a flash head, which is due to the fact that a monobloc has a bare bulb and the LEDs only have a limited spread. It didn’t take long for me to revert to using the diffuser that comes with the light. This is really simple to attach, and ever so effective. The light is incredibly bright and the ability to control the colour temperature, to match daylight or tungsten, is fantastic.

The only real downside I found of the light was the cooling fan noise. When I film an interview I hope to have as little background noise as possible. I understand the requirement for the cooling, but I would have preferred the light to rely on additional heat sinks or something to control the temperature.

Alongside this light I use a Dedolight Felloni, and I have to say there are clear areas this light is far more useful than the Felloni. This light has a far wider spread and seems to be more powerful by a long way.

I would have no qualms using these lights for the majority of my film work, especially for the price, but be aware of the size/portability compared to other LEDs on the market, and the sound produced by them.

Cheaper multi-brightness lights often have some troubles with banding, but how severe is that effect with the NiceFoto 1500A? When using a shutter speed of 1/400 second I started to notice the banding at almost any power under 1/2. In practice this is never a shutter speed that I would use for video, so the banding is not an issue.

What is often a problem with cheaper bicolour LED lights is that their CRI is lower than most other lights. The effect of lower CRIs is that some colours, including skin tones, look unnatural in photos and videos. For this reason it is essential to choose lights with high CRI values. Unfortunately I do not have the gear to test CRI, but I have tested the light by taking some stills with different light sources and comparing them with the NiceFoto light. Although my test method is far from accurate, I did not notice any colour differences between the NiceFoto and my Dedolight Felloni

During this test I did notice that the 150W NiceFoto light has a power advantage over the 24W Dedolight. Without the reflector fitted the Nicefoto has an immense spread, much much more than the LED panel from Dedolight, but the 1500A still has a 1-stop advantage. When fitting the reflector with diffuser on the front this increased to 1 2/3 stop and removing the diffuser adds another 1/3 stop. In the centre of the beam the Nicefoto has 2-stop advantage, but this advantage increases when looking off the centre of the light beam. The NiceFoto has a fairly constant light output over the area it lights,Â  after which there is a pretty harsh fall-off. In comparison the Dedolight has a much more gradual fall-off. Although my test method is far from scientific, I think the claimed power of 150W is fairly accurate. 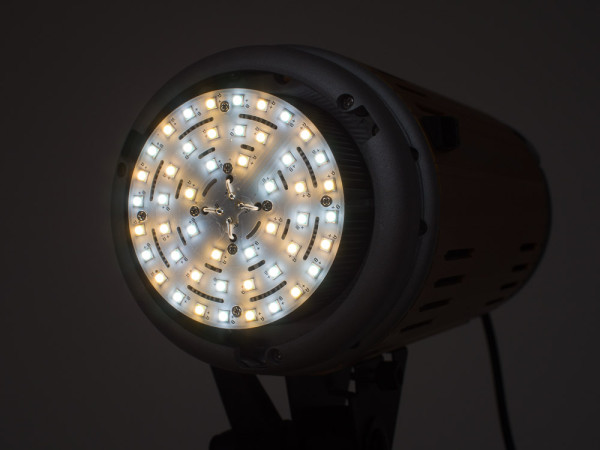 Something worth mentioning is the way how bicolour LED lights work. When you put the light on full power, 50% of the power comes from the 3200K LEDs, and 50% comes from the 7500K LEDs. The point of maximum brightness was somewhere around 5000 Kelvin, a point where all LEDs have 100% output. The claimed power of 150W goes down to approximately 75W when adjusted to 3200K.

For the price it is a very reasonable deal. Xenon or tungsten light will always have higher CRI, but that said this is a very economical alternative against some more professional lights. The performance might be not comparable to some higher-end products, but for the amount of money you are spending you are getting quite a lot of performance. In the end you always have to consider the value for money and my thoughts about the NiceFoto 1500A are that you are getting a great deal.

I have a bit mixed feelings over the Bowens mount. While it is nice to have, do not expect to fit large softboxes or beauty dishes. LED lights are simply not powerful enough for that. The only big downside what I noticed is that the light is not silent. Unfortunately I was not able to test its durability to the limits, so time will tell how durable it really is. Meanwhile I will continue using it during my professional work. For hobbyists or semi-professionals I can certainly recommend the light.

For more information on the Nicefoto 1500A, visit the manufacturer’s web site.