Last year we reviewed the NiceFoto N-Flash, a Chinese-made monobloc-style studio flash that is completely wireless, thanks to built-in 2.4GHz radio triggering and a removable lithium-ion battery pack. Since I tested the original model the manufacturer has updated the unit and expanded the line-up. You can now buy Elinchrom-mount versions of the head and there are lower-end models available with analogue dials instead of the digital LCD.

The company sent us the 2013 edition of the N-Flash 480A â€” equivalent to the model I bought last year â€” to review. 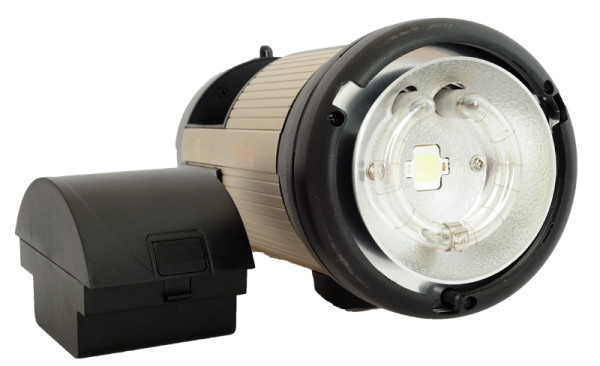 What’s new? The guts of the unit are basically the same and it still takes the same batteries. The latest version has a more precise battery indicator â€” five LEDs rather than one â€” and the power switch has been changed from a rocker switch (prone to accidental toggling) to a much better sliding switch. These are fairly minor, but much-welcomed improvements.

The 2.4GHz radio transmitter is still included, but for some reason they’ve taken the hotshoe off the top, so you can’t stack it with other triggers any more. Everything in the rest of the controls is identical, down to the idiosyncratic down-is-up and up-is-down power buttons.

By far the biggest improvement is the switchover from a halogen modelling lamp to a 5-watt LED one. Now, rather than a dim little orange light that turns itself off after a few seconds, you have a fairly bright, daylight-balanced lamp that stays on for as long as you like. It hasn’t got quite the oomph to power its way through a double-diffused softbox in a bright room, but in darkened studio environments it gives the N-Flash a whole new lease on life and feels that much more professional.

Over the past week I’ve been wandering around Edinburgh shooting “illuminated landscapes” with flash. The N-Flash, despite tipping the scales at a hefty 2.1 kilograms, has been my tool of choice for this, since it provides far more light to throw into a scene than any shoe-mount speedlight flashgun would do. The chunky aluminium case that the N-Flash comes in is probably better suited to sitting in a car boot than carrying by hand, though apparently NiceFoto is offering padded shoulder bags now.

Instead, I’ve found that the device can fit reasonably well into a standard camera backpack, provided you do some creative re-arranging of the dividers, as you can see below. I threw in a bit of the protective foam from the N-Flash’s own box for some extra padding.

The following photographs were taken as the sun set over Meadow Park in Edinburgh’s Old Town. I used the proprietary 2.4GHz radio trigger that comes with the N-Flash to synchronise the light with the camera and it seemed to do the job nicely, though occasionally I had to shift my position slightly because the tree trunks would block the signal.

After a few shots using two N-Flashes (my old one and the new one provided for the review), the battery in one of them starting complaining about the cold weather. This was probably the same issue that affects all batteries â€” reduced capacity in low temperatures â€” and wouldn’t have caught me off-guard if it weren’t for the fact that the NiceFoto battery pack has such a stonkingly long life that I hadn’t charged it once since it arrived in a box from China. In the meantime the other flash was still going strong, so I carried on with some one-light setups.

For more pictures, including some cliff-top ones from our PocketWizard PlusX test, see the full album on Facebook and Google+.

Overall I have been pretty pleased with the performance of the N-Flash. The addition of the LED modelling lamp and other improvements build on an already well-thought-out design, turning it from a relatively quirky gadget into something I can see a lot of photographers owning. While it would be nice(r) if it used non-proprietary batteries, the one that comes with it lasts so long that you’re unlikely ever to need to change during a photoshoot unless you forget to charge it. To see my thoughts on other aspects of this product, have a read of the original review.

The NiceFoto N-Flash is sold in various iterations on eBay (but don’t buy from Dzone2 because they use my images without permission). It is distributed in the UK by Mr Cad. If you know of other dealers, leave a note in the comments below. For further information, visit www.nflash.cn.