Kenro, the UK Nissin distributor, has announced that the new Di700 flash unit is in stock at UK retailers for Â£169 (RRP Â£195). The flash has auto-TTL power control for Nikon, Canon and Sony camera systems, plus manual adjustment down to 1/128 of full power.

The device was first shown off at Focus On Imaging 2013Â but we weren’t allowed to get our mitts on it. Now it’s on shelves, however, so we can expect to see product reviews start trickling in.

The Nissin Di700 has a metric guide number of 35 at the 35mm zoom setting, or 54 at the maximum zoom position of 200mm. It will recycle from a full power flash in four seconds and you can speed this up by connecting an external battery pack. The four AAs are loaded in a removable cartridge, which you can buy extras of and pre-load so that you can swap in a fresh set batteries extremely quickly during a photo-shoot.

Everything is controlled from the full-colour display on the rear of the device, along with the rotating selector wheel. The flash head swivels 180Â° left and right, tilts upwards 90Â° and downwards 7Â°. Unlike some other aftermarket flashguns, the head has a locking mechanism, so you can leave it in a certain position and it won’t move until you want it to do so. 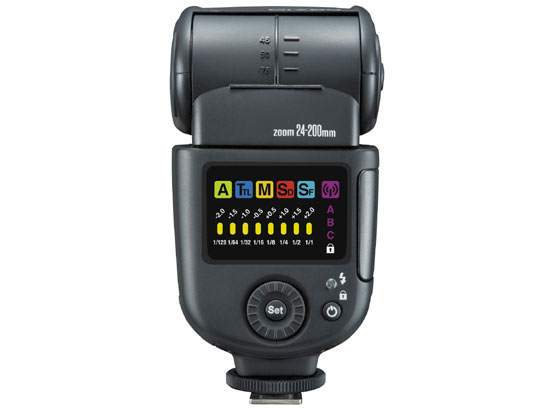 There is full support for high-speed sync (HSS; FP-Sync) up to 1/8000 second on compatible cameras and the Di700 can act as an advanced slave flash for optically-transmitted wireless flash systems (Nikon AWL, Wireless E-TTL et al) in group A, B or C in channels 1â€“4.

For fans of manual mode, the Di700 has two simpler optical slaves â€” one for a single flash (SF) and one that’ll ignore TTL pre-flashes (SD) â€” as well as a Prontor-Compur (PC) jack and 3.5mm sync port.

This actually means it has more features than the LumoPro LP180 while being sold in Europe at a cheaper price (Â£169 vs â‚¬200). Could it give the original “Quad-Sync Flash” a run for its money?Â Considering the Nissin unit supports external battery packs, it also compares favourably with the Yongnuo YN568EX (Â£120), Canon 430EX II

You can order the Nissin Di700 in Nikon

versions from Amazon for Â£169. The Nikon and Canon models are available now and the Sony variant is coming in September. In the USA,Â B&H PhotoÂ have it listed for $259 with an expected release date of 31st July 2013.

For more information and other UK dealers, visit the Kenro product page.