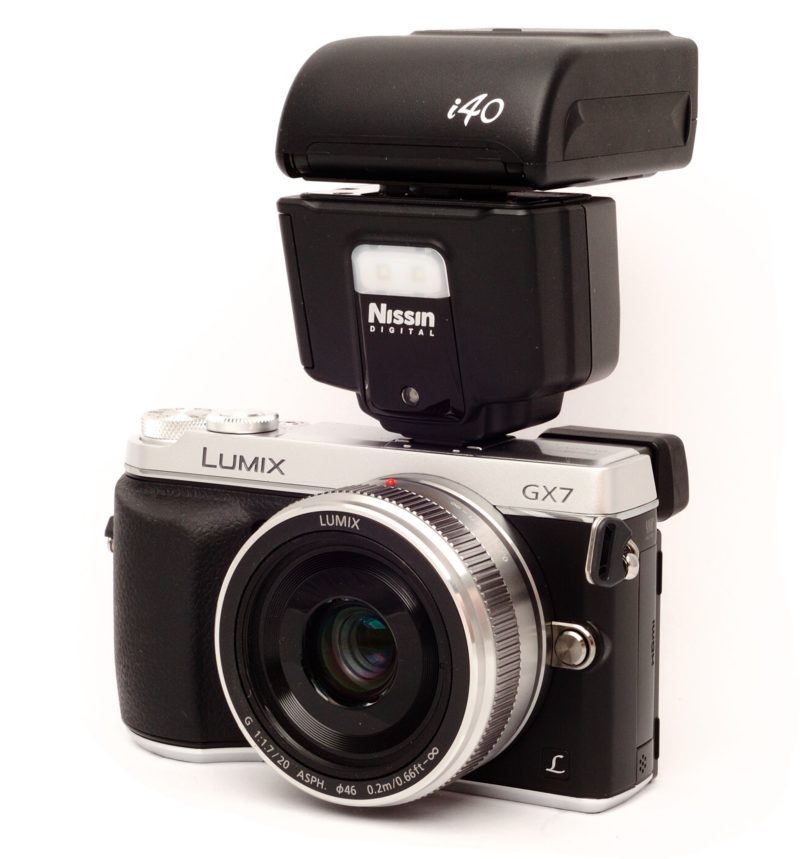 Mirrorless, or compact system cameras are a growing market. But it has taken some time for the rest of the market to catch up, leaving flash users with a choice between gigantic, expensive DSLR-orientated flashguns on their diminutive cameras, or small consumer-friendly ones that are woefully low on power and short on features.

Then Nissin introduced the i40, a shoe-mount flash that is much smaller than modern flagships, yet still takes four AAs, produces a decent level of power and has the full range of manual power control, TTL, exposure compensation, high-speed sync and wireless features.Â Kenro, Nissin’s UK distributor, were kind enough to lend us a Nissin i40 for Micro Four Thirds to review. 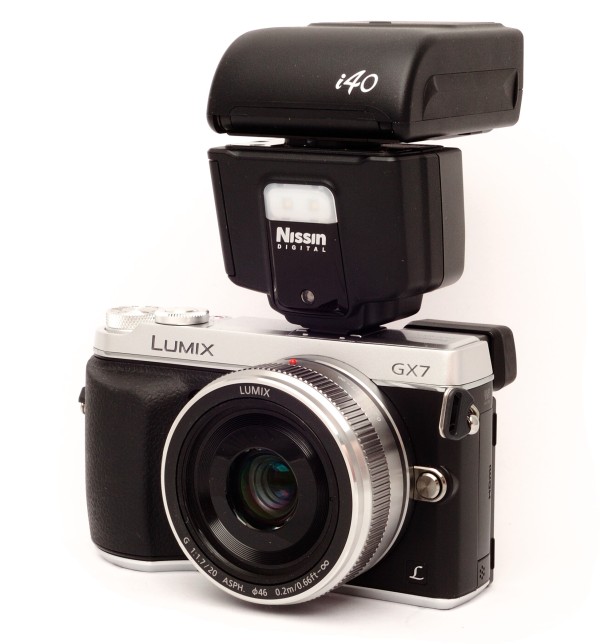 Out of the box, it is difficult to anticipate how small this flash is, considering how many things you can do with it. Nissin found room for a power control dial that lets you adjust power from 1/1 to 1/128 in manual mode as well as have +/-2.0 EV exposure compensation in TTL mode (in this case, TTL for Olympus and Panasonic). The control wheel is justÂ as easy to use as that on the retro-styled Fujifilm EF-X20, but unlike that flash, the i40 has a fully tilting and swivelling head, allowing you to bounce flash off the ceilings and walls to your heart’s content. 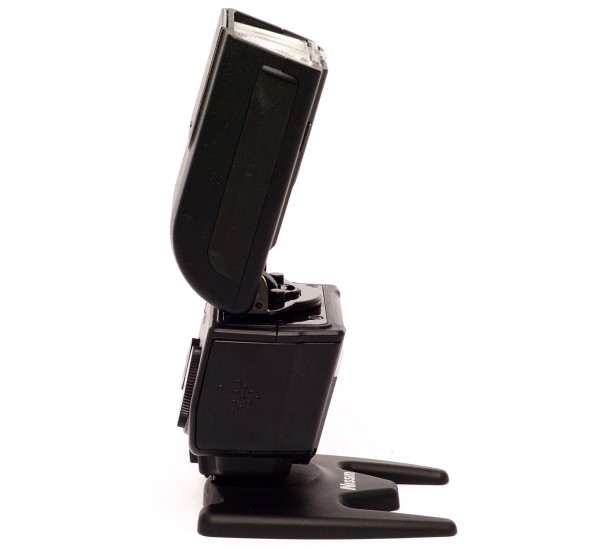 One thing that is a bit fiddlier to adjust is the fresnel zoom setting. When you first turn the flash on, the first thing you will hearÂ is thatÂ the zoom mechanism doing a loud impression of aÂ dial-up modem. It is just as noisyÂ when switching zoom levels (24, 50, 80 and 105mm and automatic settings are available) as there isn’t a dedicated button for this: instead you must hold the power button down for three seconds. It will remember your last-used manual settings between sessions, but if using the i40Â as a manual off-camera flash then adjusting the coverage can become a tiresome process. Leaving it in auto mode on the camera, on the other hand, is fine, if a tad noisy when zooming the lens.

Changing power levels in manual or TTL modes is quick and painless, though the dial is susceptible to being knocked into the wrong position on occasion.Â Impressively, this level of control also applies to the built-in video lamp, which I didn’t really use much as I’m not that into video, but I can see being useful in a pinch. On my Pansonic GX7, TTL exposures were very consistent and accurate (as accurate as can be expected from TTL metering) and despite usually being a manual-only user, I found myself liking the worry-free operation that TTL mode on the i40 offered.

While shooting events, the i40 is unobtrusive, and â€”Â crucially â€”Â does not make my GX7 feel top-heavy or cumbersome. You can happily go to a party with this setup just to get above-average social photos, and when not taking pictures your camera can be slung over your shoulder without feeling bulky and awkward. The flip-out diffuser is surprisingly sturdy; I am used to nearly all speedlight-style flashes having wide-angle panels vulnerable to breaking off at any time. The rest of the flash is similarly well-built and the tilting mechanism is quite clever, though the battery door can be fiddly at times.

To measure the output, I used a Sekonic L-358 incident light meter.Â The i40 metered f/22, Iso-200 for a full power flash at the 50mm zoom level, at 1 metre range. By comparison, the venerable Yongnuo YN560-III gave me f/29 under the same conditions; that’s 2/3 stop brighter. All in all, the i40 seems to produce plenty of light for its size. The Nissin-specified recycle time is a maximum of 4 seconds, but I found my unit was generally quicker than this, unless I had been shooting a lot and the batteries were draining orÂ getting warm. 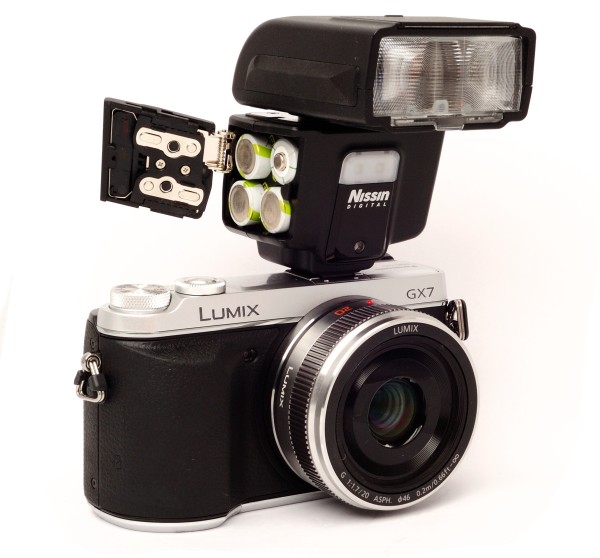 The optical slave modes worked well indoors, both when triggered by manual flashes and when faced with TTL pre-flashes. I tested it with the Panasonic GX7’s pop-up flash and the Nokia Lumia 1020’s built-in flash without any syncing issues.

This little flash also supports proprietary wireless optical control systems, and (as soon as I found the menu on my GX7 to set up the pop-as a master) I was able quickly to make a Micro Four Thirds wireless flash setup with TTL and remote power control for indoor use. Thus if you don’t have any other flashes or radio triggers and get the i40 as an on-camera flash, you can easily start dabbling in off-camera flash as well. The i40’s controlsÂ limit to a single infrared channel; you can only change the group.

If you are looking for a dedicated remote flash then the i40 wouldn’t be my top choice; as well as the limited controls (and no fine-tuning in 1/3 stops), off-camera flashes generally don’t benefit from compact size like on-camera flashes do. You’d be better off finding a beefier manual flash, and maybe even going down the all-manual route to save money. I’d see the i40 better suited as primarily an on-camera flash that occasionally gets used off camera if you don’t have other lights to hand, or are on a trip without muchÂ gear. 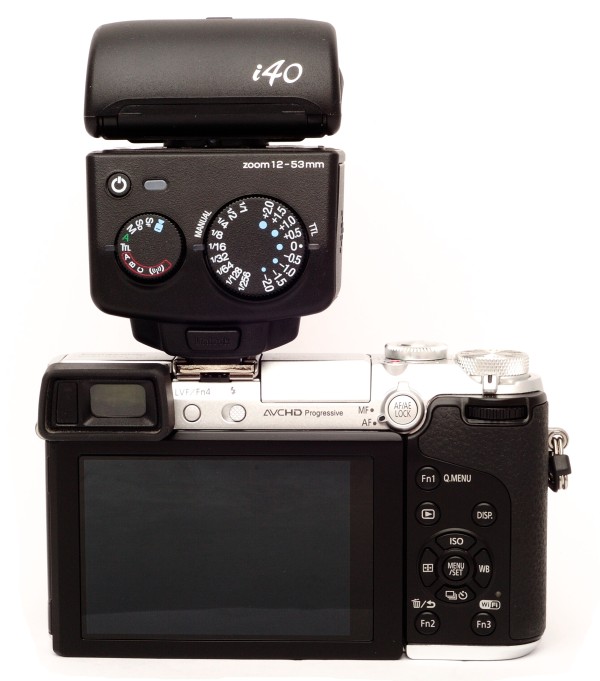 After returning the flash we borrowed toÂ Kenro, I missed having the i40 on my GX7, and currently have to make do with the YN560-III, which can be a little bit unwieldy. Nissin has spoiled us now: it will be hard for other manufacturers to get away with producing flashes, large or small, without such a full feature set.

The Nissin i40 is available now for Canon, Nikon, Sony, Fujifilm and of course Micro Four Thirds. The current price is Â£169.99, from Wex Photographic and other retailers; or in the US $269 from Adorama, B&H Photo etc. Thanks to KenroÂ for providing the sample in this review.

Should you buyÂ one? Off-camera lighting enthusiasts would probably benefit from a cheaper, brighter manual flash from one of the Chinese manufacturers, and those with big DSLRs may not benefit from the i40’s compact size. But if youÂ are in the market for an on-camera flash for small system cameras then you cannot go wrong with the Nissin i40, for its features, price, size and ease-of-use. I am tempted to buy one for myself!