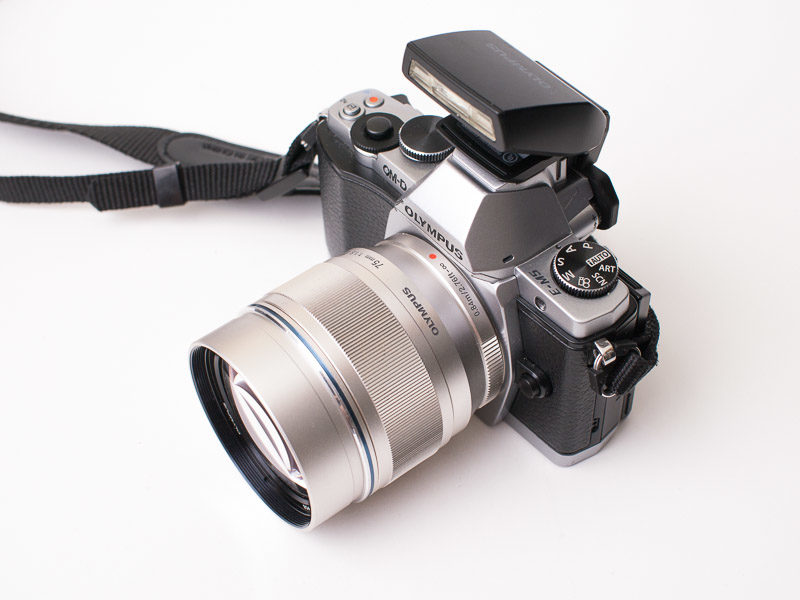 Recently I acquired a Olympus E-PM1 as an experiment Â to see if you would be able to shoot portraits on a budget. As you can read, my experience was quite good, but there as one thing in the menu of E-PM1 that made me wonder.

Apparently the bundled little flash included with the E-PM1 has a RC mode, meaning that it can communicate with other RC flashes and fire them. Canon has this as well (although I have to admit I never used it) as does Nikon. On my Nikon D800 I have used the creative lighting system, better known as CLS, quite a lot, so I was curious if the system of Olympus would work just as well. 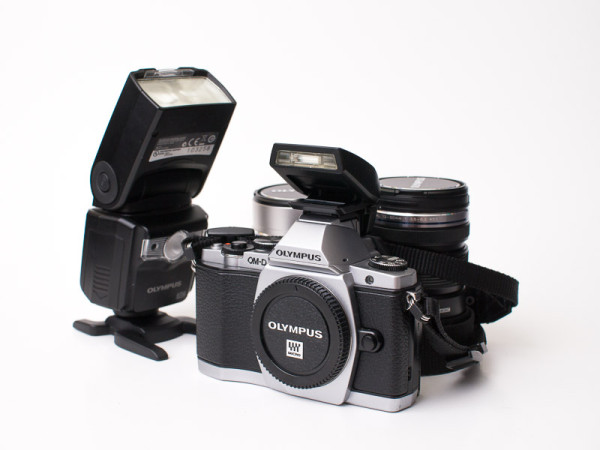 Olympus Netherlands agreed to send me a kit consisting of an Olympus OM-D E-M5, a FL-600R flash and a set of lenses. My mission was to test if the RC system is able to deliver the performance that I was expecting from it.

When I unboxed the OM-D, it surprised me a bit how small it is. As it is the top-of-the-line model of the mirrorless cameras of Olympus I was somehow expecting it was bigger. Size is almost comparable to the E-PM1 that I used earlier, except for the electronic viewfinder. Unlike the E-PM1 it feels comfy to hold, rather more like a serious camera than a high-end compact. 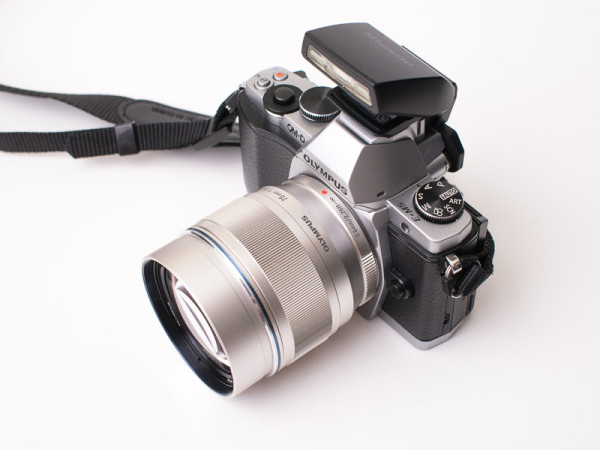 I can bore you about the specs of the OM-D, but as the camera has been released for quite a while and there are many reviews already available concluding that the OM-D is a very good camera. It only leaves me to say that I agree with them. Â Other things except for the size that surprised me were the IBIS. The sensor stabilization is remarkable, works exceptionally well and due to the low weight of the camera and lens it is possible to handheld the camera with shutter speeds that otherwise would require a tripod.

Since I have been using my D800 for quite some time now I consider it as the standard level of camera. I am not going to compare apples with oranges by comparing the full-frame beast against the OM-D, but it seems that Olympus marketed the OM-D to the same professionals that would require a professional SLR. Of course you are still limited to the different type of sensor, which results in more noise and less dynamic range, but this is manageable.

The RC mode is the reason why I was lent an OM-D in the first case. As I am quite an experienced user of Nikonâ€™s CLS I was eager to test if Olympus could offer the same performance as my Nikon DSLR. The CLS of Nikon has saved me on quite a few occasions as back-up triggers and for the occasional run-and-gun portrait it is ideal. 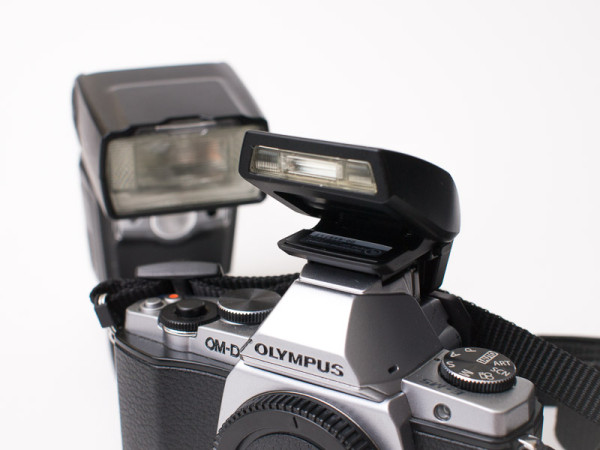 Activating the RC mode on the camera is done in the menu. I used the little flash that is included in the kit to trigger the external flash.Â  Settings such as power and channels can be reached by pressing a single button, instead of going through a series of menus as you have to do with the Nikon. 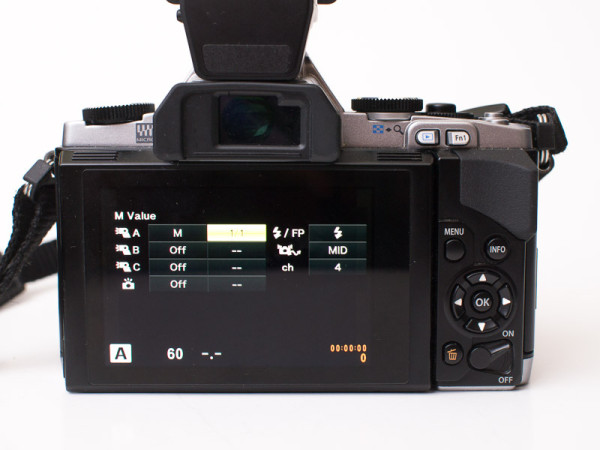 There are multiple flashes that support the RC system, but the one that I was given was the FL-600R, the flagship model of the Olympus flashes. From the exterior, it doesn’t look so impressive since the unit is rather small. It is much smaller than the Nikon SB-910, even a bit smaller than the SB-800, presumably done to match the form factor of the Micro Four-Thirds system cameras.

The menu of the of the FL-600R is not as advanced as the flashes from Nikon. I had to resort to the manual to understand all the functions of the flash, but fortunately for me, you only have to setÂ  it to RC mode once. I am quite sure that with more experience the menu wonâ€™t be a challenge any more, but I would like to have seen less information crammed on this tiny display. The screen is one with fixed characters instead of a “dot matrix” made up of pixels. 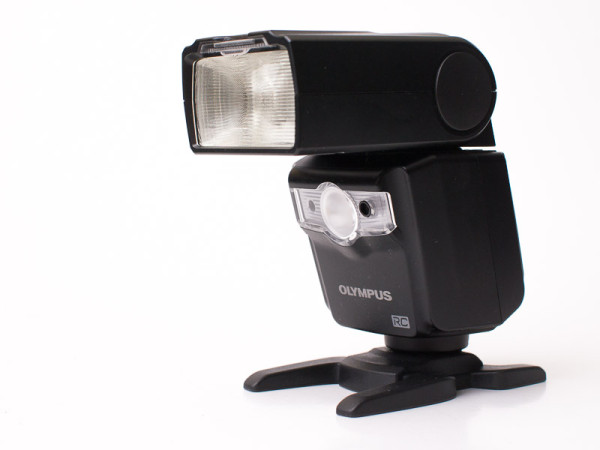 I forgot to mention that there is a LED light on the front of the flash as well, which can be used to shoot videos. At first you might wonder why it is important to know that there is a LED light when you just shoot portraits. I’ll tell you: it is annoying. Activating the RC mode on the flash makes the quite-bright LED light blink once every five seconds or so to inform you it is on. Other than taping up the light there is no possibility of turning it off. It distracting to me, annoying for my subjects and worst of all, very inappropriate when shooting events such as weddings and so on. The faint blinking red LED on the Nikon is much better.

To test the RC system I was planning to use it in situations where I have previously used the CLS system. In order for the sensor to detect the infra-red (IR) communication light it is preferable to have less ambient light, so it does not have to overpower the already existing light. The worst-case scenario would be sunny conditions. I have used Nikonâ€™s CLS in bright light in the past, which was not always reliable, but it did work. During the first shoot I wanted to check if the RC system could offer the same performance in bright sunlight. 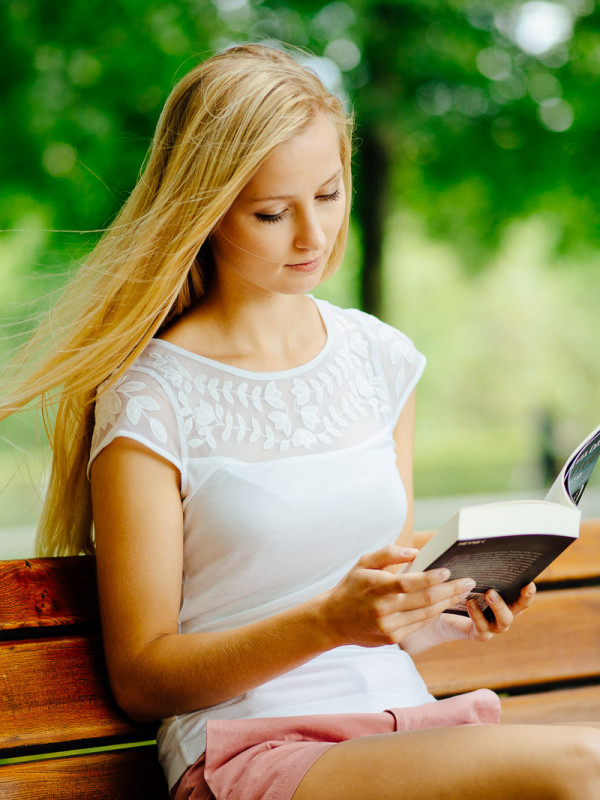 Maybe it was the positioning of the flash, or the strong ambient light but I didn’t manage to trigger the flash. In order to keep my model still happy I just gave up after 15 shots and used ambient light instead. This way I was also able to use the 75 mm lens wide open since I wasnâ€™t limited to the 1/250 flash synchronization time. 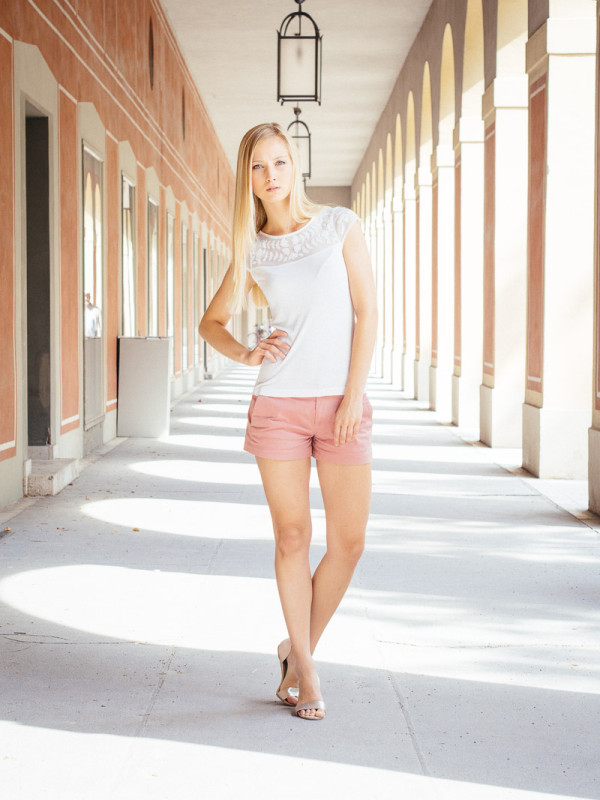 After relocating to a different spot I was willing to try it again, but with mixed results. Using the 75 mm lens meant that I had to stand away outside the range of the sensor, and when I was closer it wasnâ€™t trigger reliable enough for me to continue working with it. At that moment I was very happy that I brought my triggers. Maybe a different location would increase the performance of the RC system.

For the second shoot I chose a spot with less light, in the basement of an industrial building. Even now I still had some misfires, but it was already much better than before. However the contrast autofocus was not so happy with the location I chose, since it preferred to focus on the background, as my model was backlit. Maintaining line of sight with both your flash and your model in a tight hallway is rather difficult and sometimes it limits the compositions you can make. 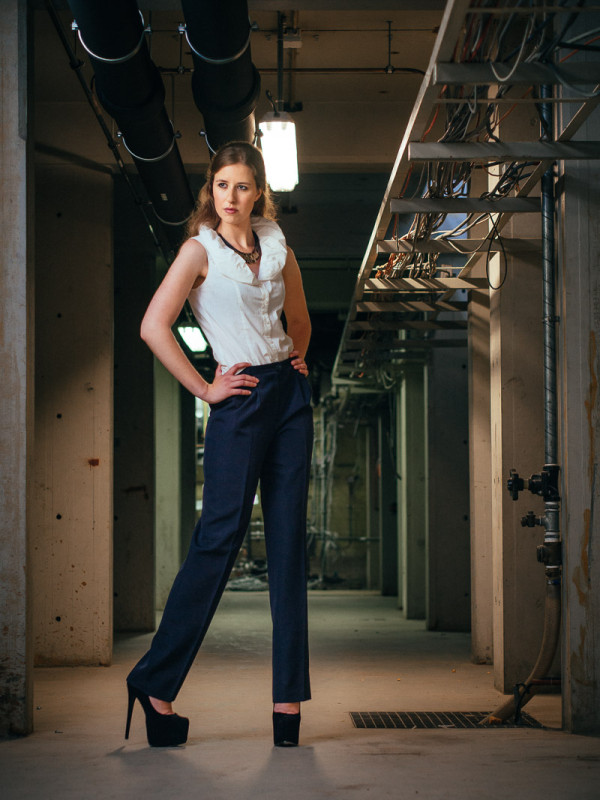 TTL mode worked well, the exposure was as you would expect it to be from TTL. However, for photoshoots I consider TTL inferior to manual, since manual gives more control over your image. I quickly switched to manual because of this reason. 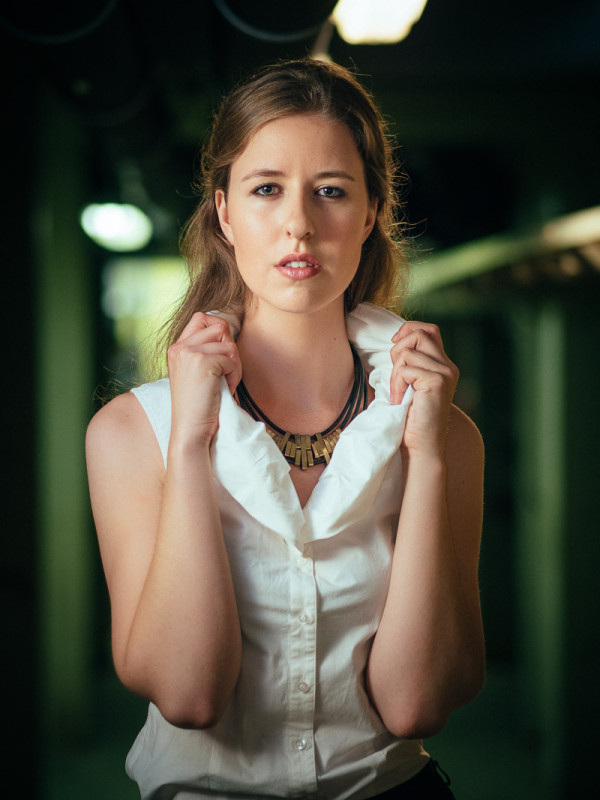 As they say, the third time is the charm and this was the case as well with my third shoot.Â  Since the sensor is located on the front of the flash I adjusted the base of the flash in such a way that it would aim at me, while the head of the always was turned in the direction of the model. The performance I got was much better than the second time. Also the fact that I chose a slightly brighter location greatly improved the AF speed and consistency. 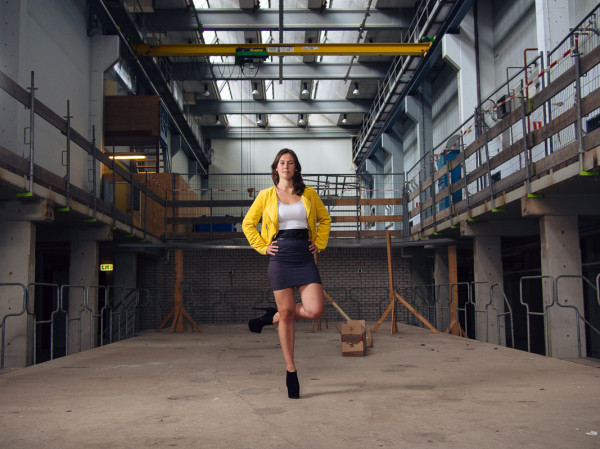 It was the first time that I had the feeling I was not being held back by the OM-D and RC system. It worked, and rather well actually. Adjusting the power on the flash was a breeze due to the fact that the flash settings are just one button away. If aimed correctly, the RC system performs just as well as CLS system of Nikon, but both are still limited to the fact it relies on IR light and not on radio waves. 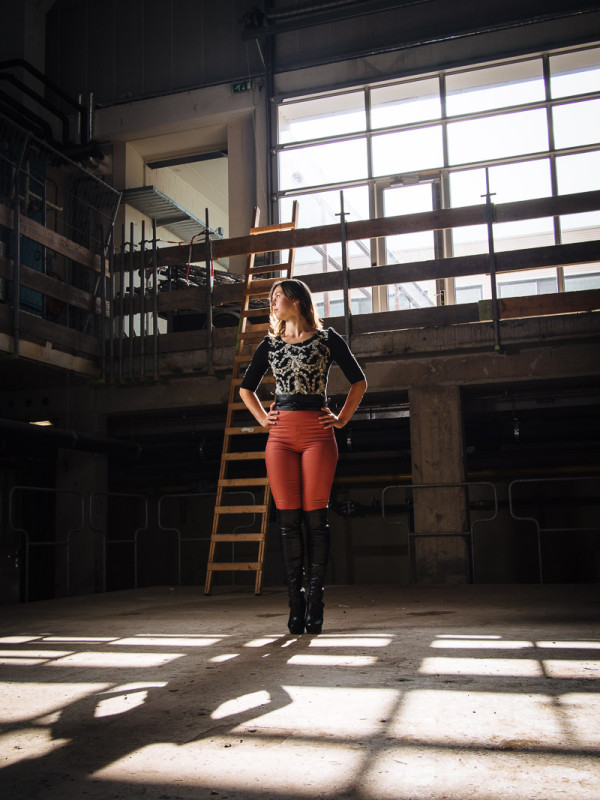 In the end the RC system of Olympus works well, just like the one from Nikon does. The position of the light sensor is a bit odd since I was used to have it on the side. Also, it seems that the light sensor is a bit less sensitive than the one from the CLS system, since with the Nikon system I had fewer misfires when the sensor was directed to the wrong side. This could also be the case that the bursts of light to trigger the external flash are brighter with the CLS system, but this is merely a speculation on my side.

As with all systems that rely on IR, you are limited to line of sight and a certain range. With this in mind, having a system that can remotely control your flash by IR light is a great addition to any camera. Joe McNally solely uses CLS for his work, and see where that got him. With RC, CLS or any other system you sometimes have to solve problems you wouldnâ€™t have with radio triggers, but it can be great for a quick portrait or as back-up for your radio triggers.

What I donâ€™t like about the FL-600R is the LED that blinks when the flash is in RC mode. It is annoying and cannot be turned off unless you just gaffer tape over it. I am also missing the audible feedback to know if the flash fired correctly. The flash lacks also a AF-assist light, which I would expect for a high-end flash.

Concluding, if you have an M43 and considering an external flash the Olympus FL-600R is certainly something you should consider. At 300 euro it might not be as cheap as a Nissin flash, but in my opinion there should be at least one high-end flash in your kit. If you arenâ€™t looking for a high-end flash but still would like to experiment a bit with the RC system the Olympus FL-300R (not tested) could be a better option.