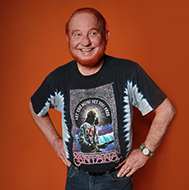 Paul Conrad Buff, president of the eponymous American studio lighting manufacturer, has died at the age of 78. The company he founded in 1980 is best known for its White Lighting, Alien Bees and Einstein studio flash systems.

“With great sadness we announce that our founder, Paul C. Buff, passed away this week at the age of 78,” the firm announced. “He has been living with his beloved wife of 16 years, Deborah, and their extended family in their secondary home in Mobile, Alabama for over a year and passed away in this home with his family around him. Those of us who have had the pleasure of knowing and working with Paul have lost an invaluable mentor, an inspiring leader, and a treasured friend. The world has lost one of its most creative and adventurous pioneers.”

Anyone wishing to offer condolences is invited to send messages via the company web site.

Buff was sole stockholder of Paul C. Buff Inc. and it has not been publicly announced what the future holds for the company or who its next leader might be.