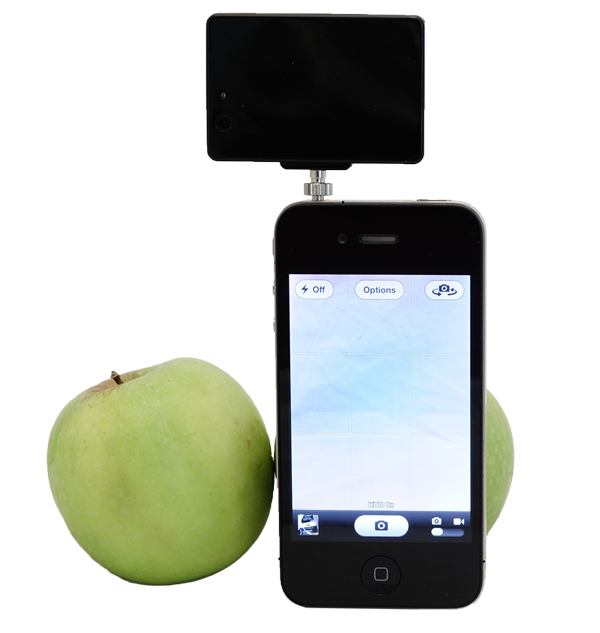 Today we’re looking at Photojojo’s Pocket Spotlight, a tiny LED light that fits on a cameraphone, in the hotshoe or in your hand.

Unlike some other mobile phone lighting solutions, the Pocket Spotlight doesn’t require you to fit a special case to your phone and will fit almost any device, thanks to its interchangeable 3.5mm headphone plug and standard cold-shoe foot. I was sent a set to play with. 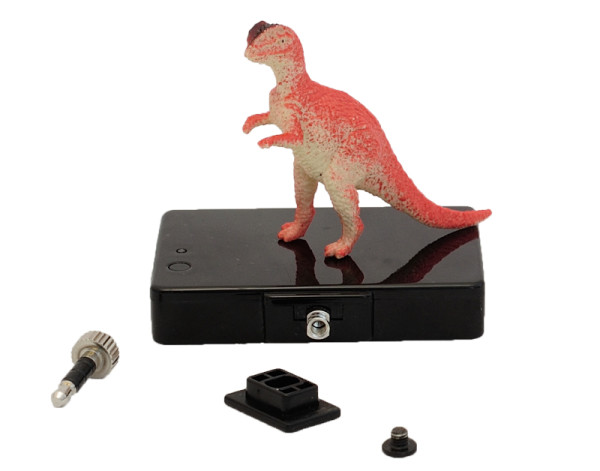 Photojojo sent me one Pocket Spotlight, complete with 3.5mm connector, a shoe mount, USB cable and a random toy dinosaur. The tiny product came in a big package the size of a shoebox, which seemed rather wasteful, but the company said they would look at revising this in future to reduce waste.

The 3.5mm plug screws into the Spotlight by hand, while the hotshoe foot needs a small Philips-head screwdriver (not included). I couldn’t track down a small enough screwdriver but the tip of a sharp kitchen knife seems to do the job. The headphone plug is shielded with plastic so that it doesn’t interfere with the electronics of your mobile device. 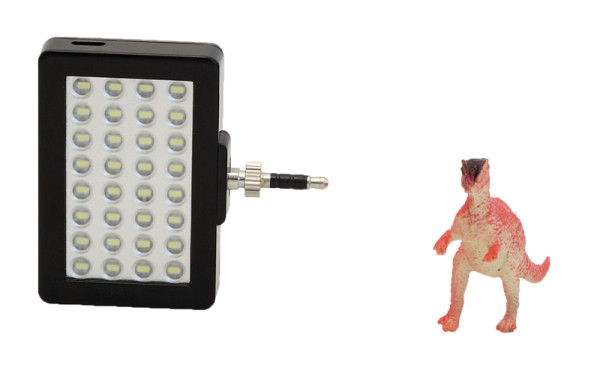 Nearly all phones have headphone jacks, so this mounting option is really rather clever. What’s more, many phones have a light for their rear-facing camera, but if you’re taking a self-portrait or making a video call then there isn’t any illumination for the front-facing camera. The Pocket Spotlight will easily spin round to face you, allowing you to use the front camera in dark places if you can stand being dazzled by the light for long enough.

Not every device has the socket on the top though â€” Blackberrys tend to have one on the side and the Apple iPhone 5 has its on the bottom of the device â€” so think about which orientation you like to hold your cameraphone when taking pictures.

My own personal cameraphone is an Apple iPhone 4, whose own LED ‘flash’ is utterly useless for taking half-decent photographs. The default camera software isn’t even calibrated to the colour of the light it emits, resulting in all of your flash-lit images becoming a dull greenish mess, complete with unflattering red-eye effects. This is the case for most phones I’ve used but perhaps the iPhone 4S and 5 are better? Let me know in the comments below.

This little accessory matches the iPhone well, being about the same width and thickness, though I have to keep it in a separate pocket so that the plug doesn’t scratch the phone’s screen. The plug itself fits the headphone jack nice and securely, but it isn’t compatible with any of my protective cases, which is rather annoying since they fit my earphones just fine. I am sure if the plug was made a bit longer then I wouldn’t need to remove my iPhone case every time I want to use the Pocket Spotlight.

Having an LED mounted on the phone attracts the occasional bemused look from bystanders, but it is by no means the weirdest contraption you could add to your handheld (c.f. Manfrotto Klyp or DLC iPhone Grip Kit).

The Pocket Spotlight provides a significant improvement in brightness, positioning and colour compared to the iPhone’s own LED. With a professional light meter I measured a difference of exactly two stops between the Pocket Spotlight and the iPhone 4 LED, making it a whole four times brighter.Â It actually allows some reasonably nice photos to be taken at social events and is bright enough to overcome the ambient lighting in the room. 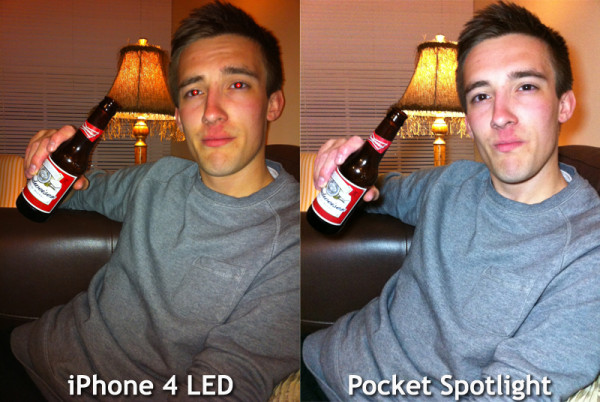 Having native ‘flash’ switched off in the iPhone’s settings also allows HDR mode to be enabled, so you can retrieve extra details from the highlights and shadows.

The light from the Pocket Spotlight is daylight-balanced, which is fine for shooting outdoors but in evening social settings seems to create a bit of a random mix between the warm ambient lighting and the relatively cool blue LED output. That said, other smartphone operating systems actually give you control over the white balance, so if you’re toting an Android or Windows Phone handset, or have downloaded a third-party iOS application, then you should be able to get more predictable results.

Photojojo does sell some colour filters (not tested by us) for $10 extra, but it looks like you can only get red, yellow, green or blue, whereas a colour temperature orange (CTO) would be just the job.

Of course the Pocket Spotlight is not just for phone cameras. Included in the box is a mounting foot so that it can slide into any standard accessory shoe. The foot is a little bit too small to fit on my Nikon D700 DSLR camera securely, but it seems to sit happily on my Nikon 1 V1

(with AS-N1000 adapter) compact system camera and can then act as an unobtrusive little video light or an alternative to a TTL pop-up flash (since this camera hasn’t actually got one). 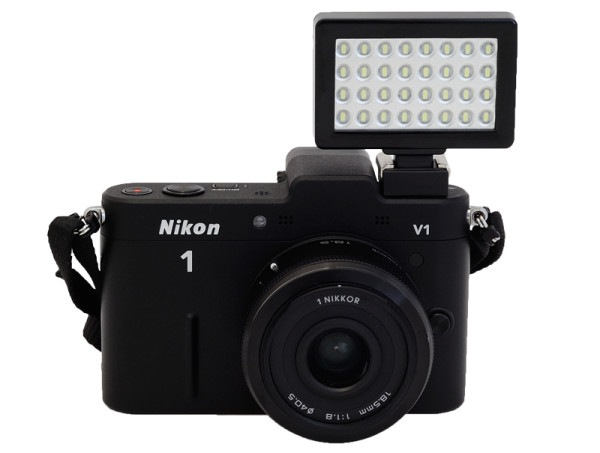 Paired with a bright, wide-aperture lens (pictured: 18.5mm f/1.8 1 Nikkor) it is thus possible to add a small amount of fill light to stills or video without completely dominating the scene with on-camera lighting. The relatively low intensity compared to flash means that the lens can be left wide open for blurry backgrounds. 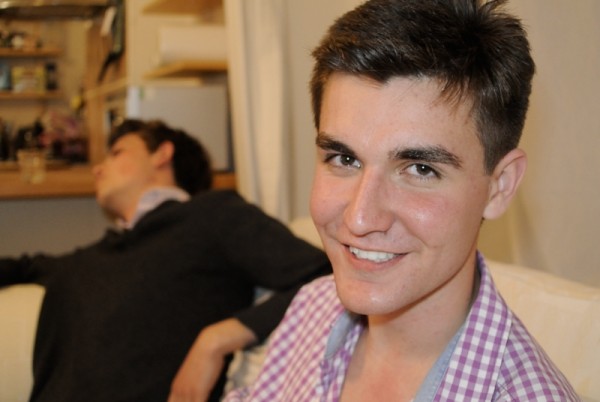 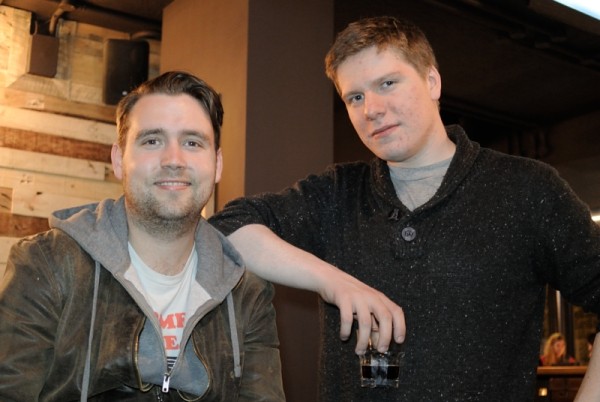 But the Pocket Spotlight is (and is intended to be) a personal gadget, not a professional one â€” a lack of brightness adjustment and colour correction filters sees to that. It’s more for photos than photography. So if you’re looking for a compact, fun accessory to improve your cameraphone photos or as a backup video light, then this $30 could be for you. It’ll also make a nice gift.

The Pocket Spotlight costs $30.00 plus shipping from the Photojojo Store, based in the US. A set of red, yellow, green and blue colour filters can be added for $10.