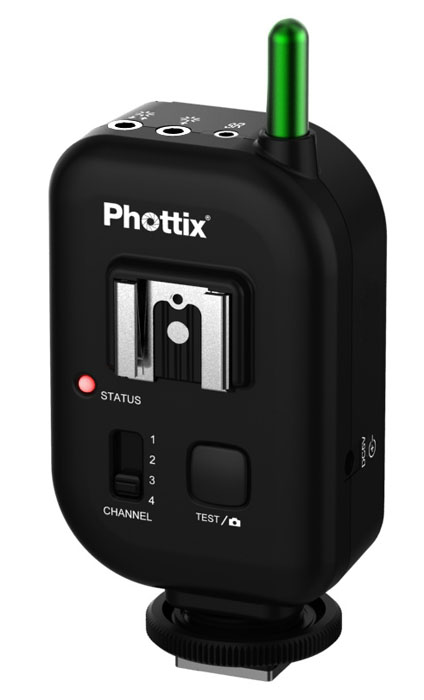 Phottix have publicly announced their high-performance Atlas II wireless trigger. It has a claimed operating range of up to 350 metres, capable of being used as a speedlight and studio flash trigger, wired and wireless shutter release. Based on a “transceiver”-type design, an individual Atlas II can change roles from transmitter to receiver (and vice versa) at the flick of a switch.

Unlike the original Atlas â€” which was frought with legal controversy â€” the Atlas II runs on the universal 2.4GHz frequency band, making it compatible with Phottix’s Odin and Strato series but not with PocketWizards. To avoid confusion with the earlier model (which is not inter-compatible, the aerial of each Atlas II is coloured bright green instead of black.

As a manual-only trigger, technologies such as high speed sync and TTL metering are not supported, so you will need to put your Atlas-mounted flashes into manual mode, even when triggering from an Odin transmitter. The maximum sync speed is 1/250 second with most cameras.

You won’t find any funny connections or battery requirements here: everything is standard. From the common AA batteries that power it to the DC 5V input, 3.5mm sync jacks and a 2.5mm shutter release port, you won’t need proprietary accessories to get the most out of this device.

The Phottix Atlas II is on sale now for $89 per unit at the Phottix Store. Stock is on its way to distributors; check with your nearest dealer for availability.