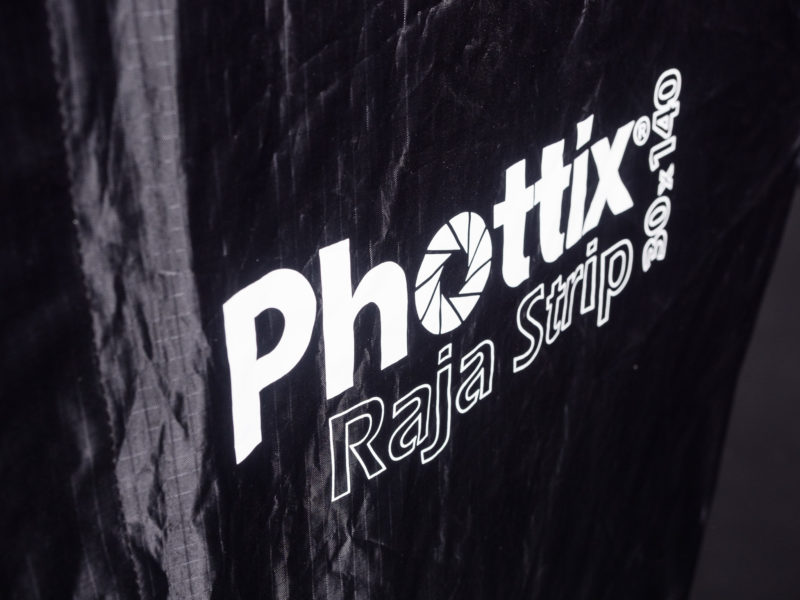 We tend to settle into fairly stable, long term relationships with our equipment. Light modifiers being no exception. I still have some modifiers from over ten years ago, and they’re fine for what they’re used for. But now and again, some small incident makes you reassess your gear, or forces you to replace it.

In this instance, I had been using a couple of pop-up 30Ã—160cm strip boxes, generally with a honeycomb. Well, to be fair, they had been very heavily used, not only by me, but by the photographers that make use of my studio. They were getting tired, and one of them had a rod that insisted on bursting through the corner, usually mid shoot. So the hunt for some replacements was on! Initially, I looked to the same source where I bought the previous strip boxes. However, their range was somewhat limited, and I wanted to look for a higher quality item. Whilst on The Flash Centre site, ordering a replacement ELB500 flash tube (a story for another time, perhaps?), I noticed the Phottix range of softboxes. Not as expensive as I expected, and from the images on the site, they looked up to the job. So, two Phottix Raja strip 30Ã—140cm boxes were added to my cart, along with the flash tube. Delivery was next day, so that gave me 24hrs to come up with a plausible story regarding the stripboxes for my Mrs. (side note: she didn’t believe me!). 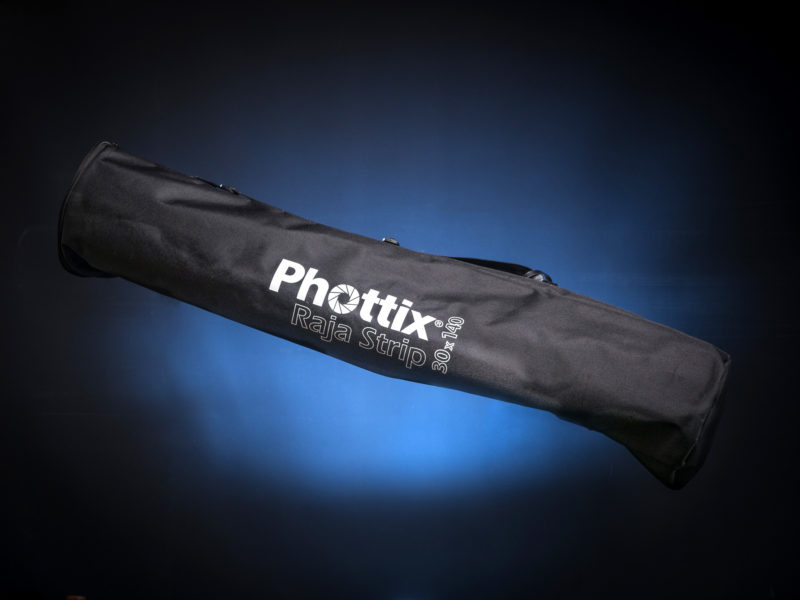 After cracking open the box, I was met with a rather substantial bag. No, let’s call it a case. Previously, any third party modifiers I’ve purchased that included a â€œcaseâ€ have been somewhat lacklustre, to be honest. My point of reference that I measure against, has always been the Elinchrom cases, as they are padded, well stitched and with superb quality zippers. A lot of others I have found to be single walled nylon, and occasionally so thin, the speedring wears through the base of the bag within a month. The Phottix case was right up there with my Elinchrom cases. It’s double walled with a padded layer. The carry handle is full length and adjustable. The zip is high quality, and runs flawlessly. It definitely protects the modifier when being thrown about in the car or venue. The case also has quite large lettering on it. Not just the brand name, but the modifier it contains too. This is such a simple thing, but it makes my life so much easier. Any ideas how long it can take to sieve through two dozen modifiers in similar cases, looking for the one you need? I have luggage tags attached to each of my modifier cases, but I have to physically lift the case, find the tag and turn it around to read the printed label. The Phottix case can be seen clearly at ten feet. Simples.

On to the stripbox itself. 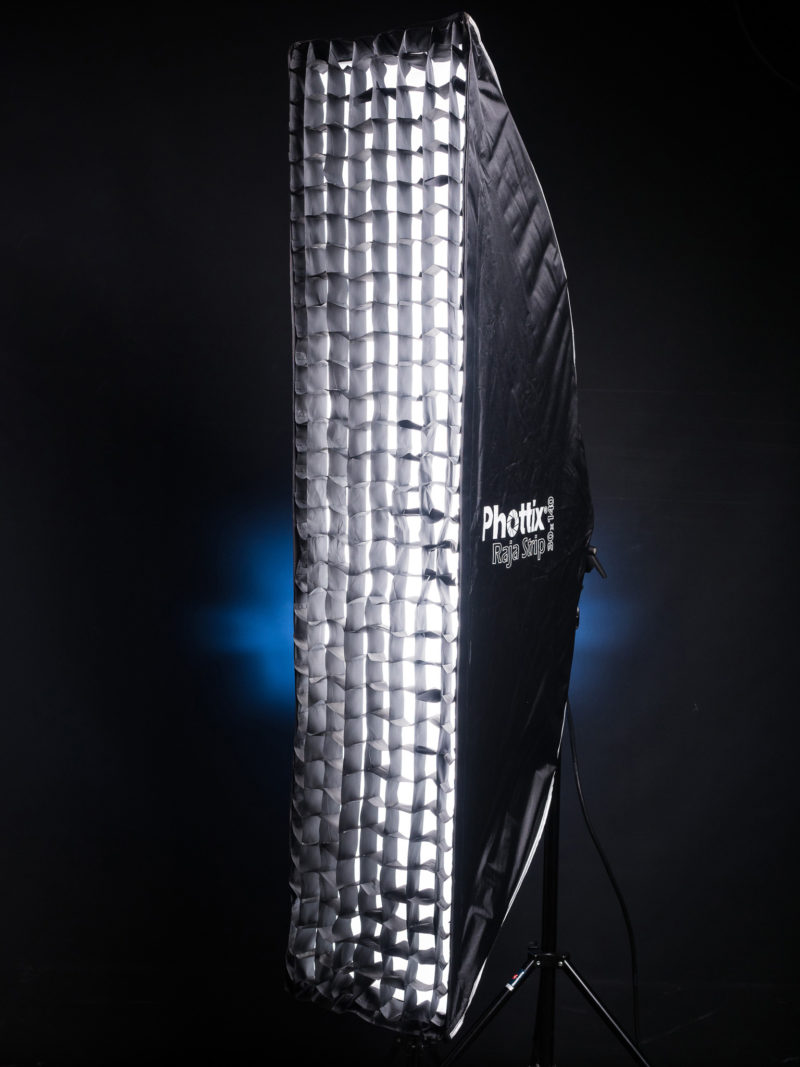 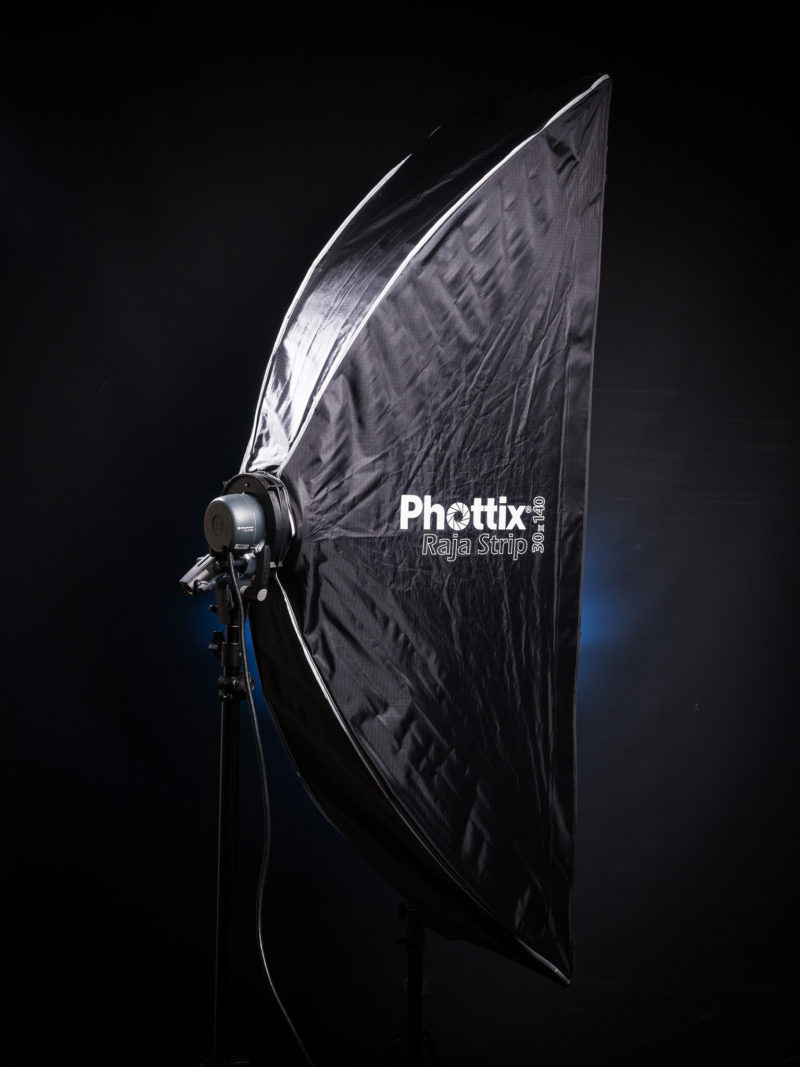 The outer fabric is very tight knit nylon. Lightweight, but extremely strong. The one thing that immediately struck me, was just how tightly it fitted around the speedring mount. 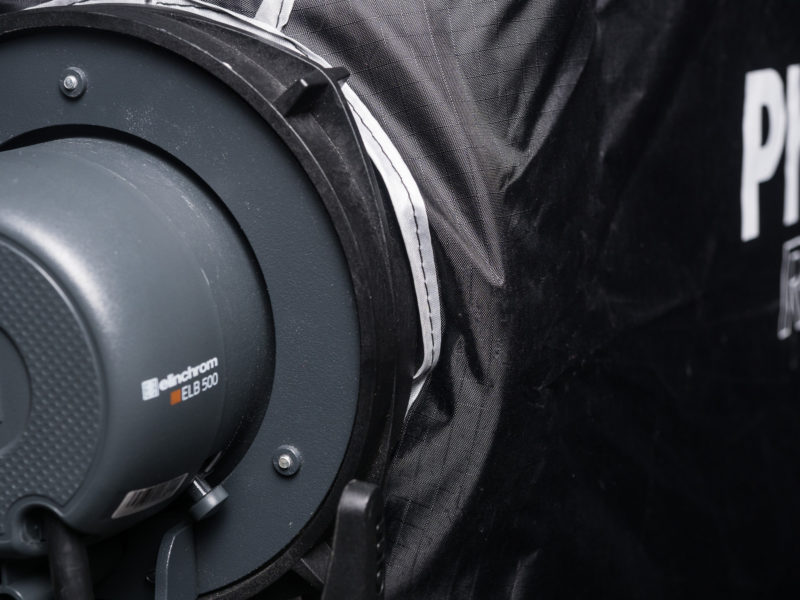 A lot of pop up modifiers tend to be rather baggy when closed down, which means the skin can slide down the collapsed supporting arms. So when you drag it out of the case, it tends to move a little further along again. And when you come to erect the modifier, you find the tips of the rod have come out from their seating pockets, and you spend the next fives minutes working your way around the modifier, trying to pop them back in. The Phottix skin is so well fitting, it remains taught around the speedring mount, and doesn’t allow the rods to pop from their seats. Again, it might seem such a small thing, but you only have to have two modifiers out of four needing adjustment when trying to set up on location, and that’s ten minutes wasted. And if you’re faffing about with a client breathing down your neck, ten minutes takes forever! 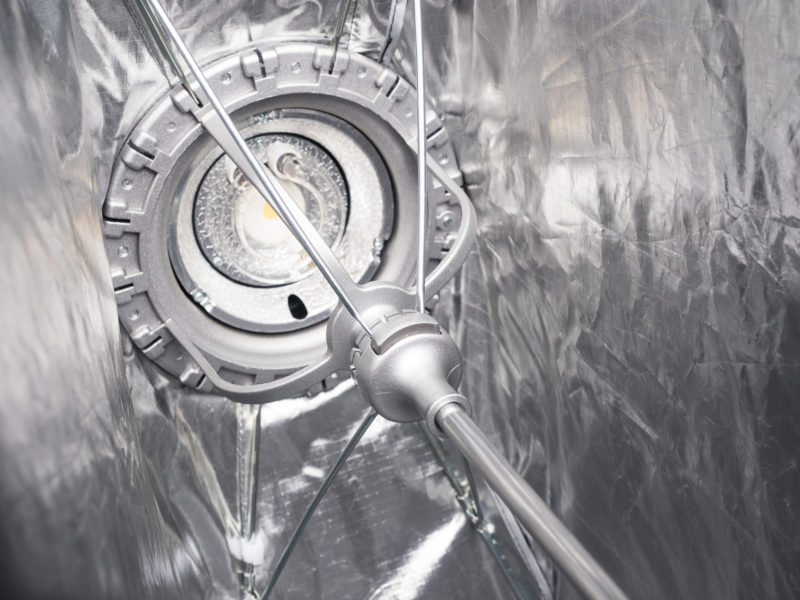 The mechanism for opening the modifier is very similar to many others. It’s an umbrella type shaft with locking collar. But once again, it’s evolved. Rather than the normal shaft lock, the Phottix mechanism has an oversized collar, which makes it nice and easy to push open. It also features a button on the collar, for incredibly easy collapsing. You don’t need to put all your weight on the collar, in an effort to take the pressure off the locking mechanism, so you can release it. Nope. Just reach in, and squeeze the button on the collar. You hear a satisfying pop as it releases, and away you go. The traditional umbrella mechanisms need you to approach the mechanism from the right direction so you can press the lock. But with the Phottix, you can reach in blind, and just squeeze the whole collar, and it’ll pop. 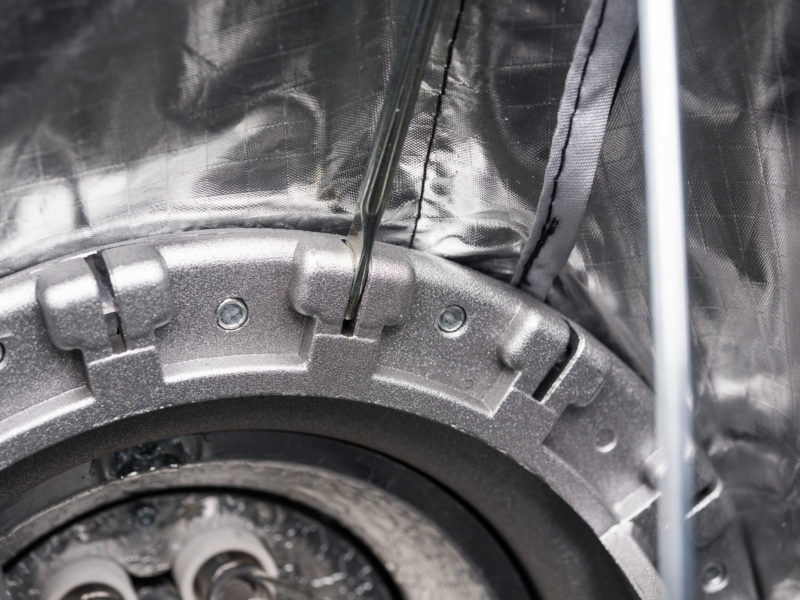 The mount itself is very sturdy, and this image also demonstrates the quality of the silver lining. 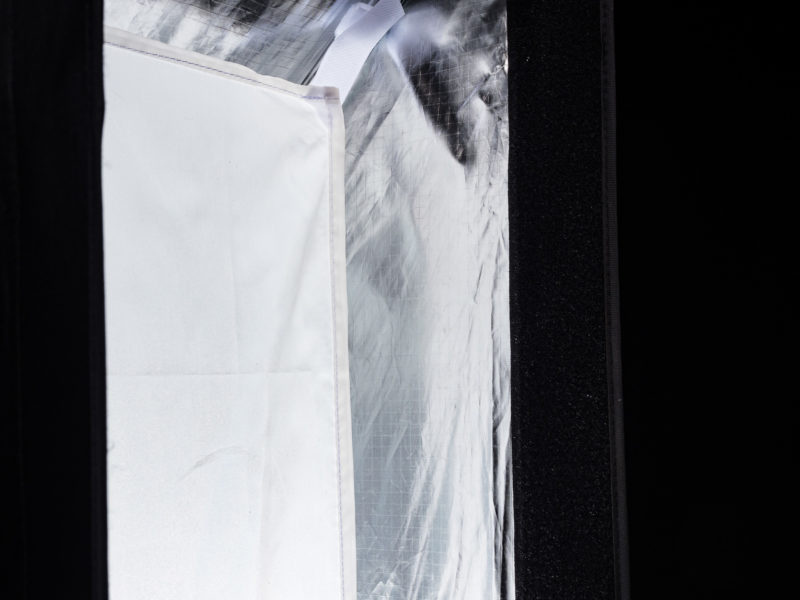 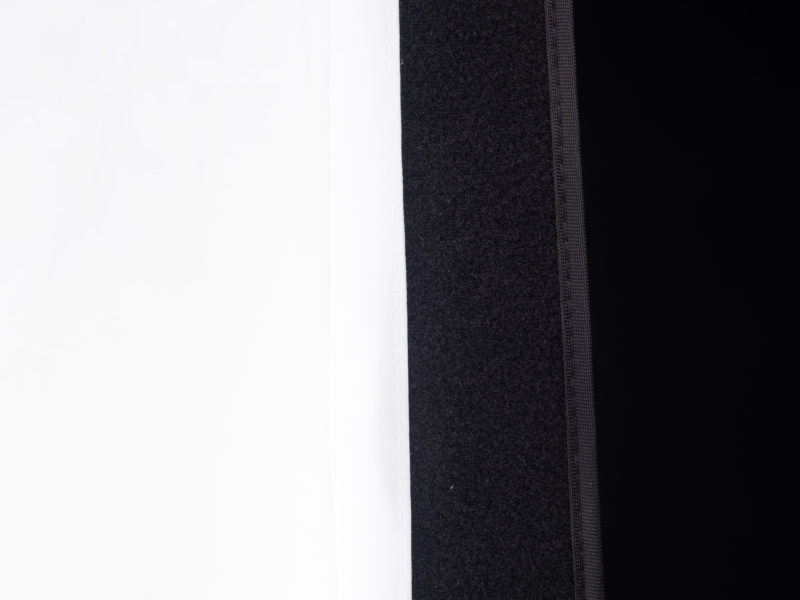 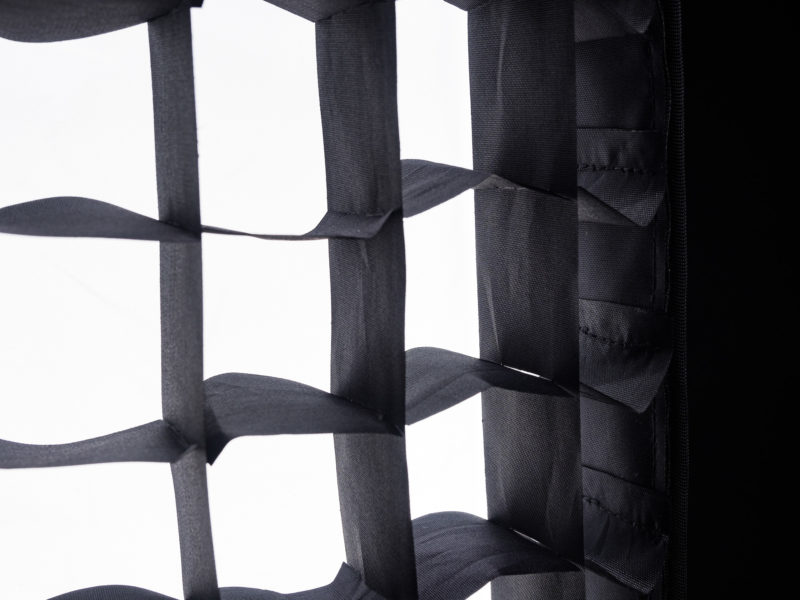 The modifier includes inner and outer diffusers, as well as a honeycomb. The diffusion panels are nicely finished, with good stitching at the edges where they anchor. This is often a weak point on cheaper mods. The honeycomb is nylon, and again, of higher quality hook and loop attachment. I’ve had some mods where the panels aren’t a dead fit. Sometimes a little big, or more painfully, too small. I’m talking just a fraction, but it can be a real pain at times. The Phottix panels are a dead fit. End of.

As with anything, the proof of the pudding, is in the eating!

I ran a workshop in conjunction with The Flash Centre, at their London base. It was a basic introduction to lighting, but using Cosplayers as models. The variation in costumes was ideal, as it allowed us to play with the texture, shape and form. I had two stripboxes available, along with a Phottix 105 Hexabox (and the 105 will definitely have its own review at some point. A beautiful bit of kit!). 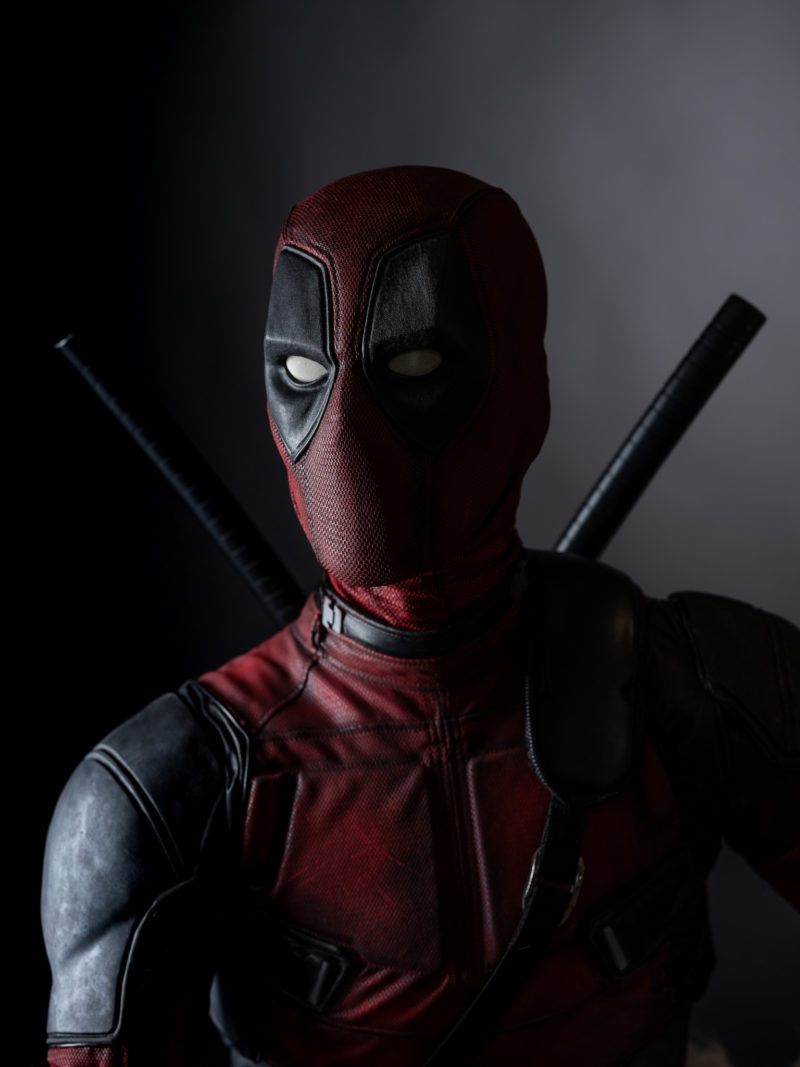 A very simple Chiaroscuro setup, using only the stripboxes. One frame left, creating the texture and shape to Deadpool’s face and shoulder. The second was frame right, firing directly at the backdrop, to create the grey to black gradient across the background. The honeycombs fitted on both boxes made the light control easily manageable, and with results pretty much as expected every time, without the need for a great deal of tweaking etc. 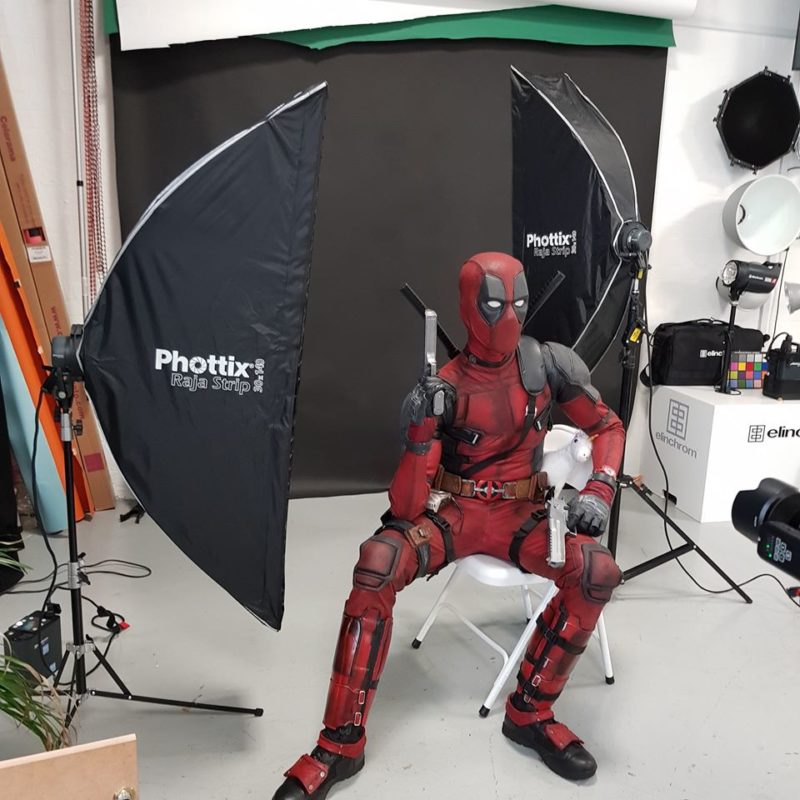 This is the behind the scenes image for all you voyeurs. This gives you a better idea of the positioning and angles of the boxes. 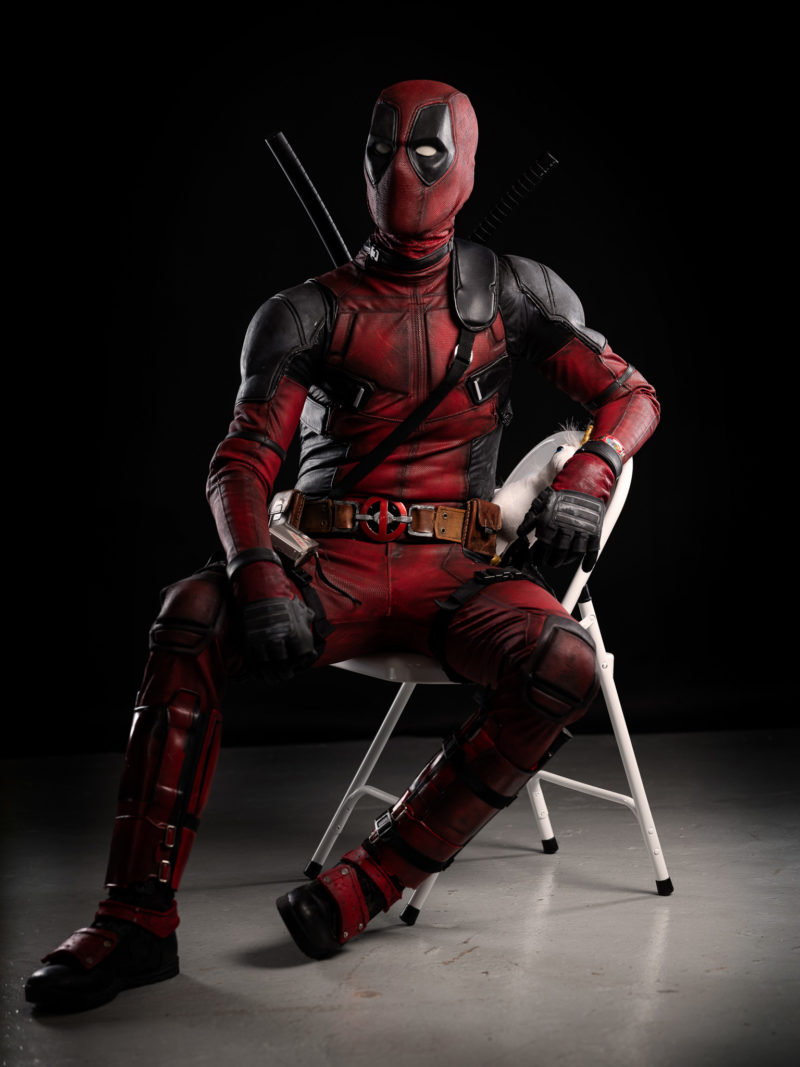 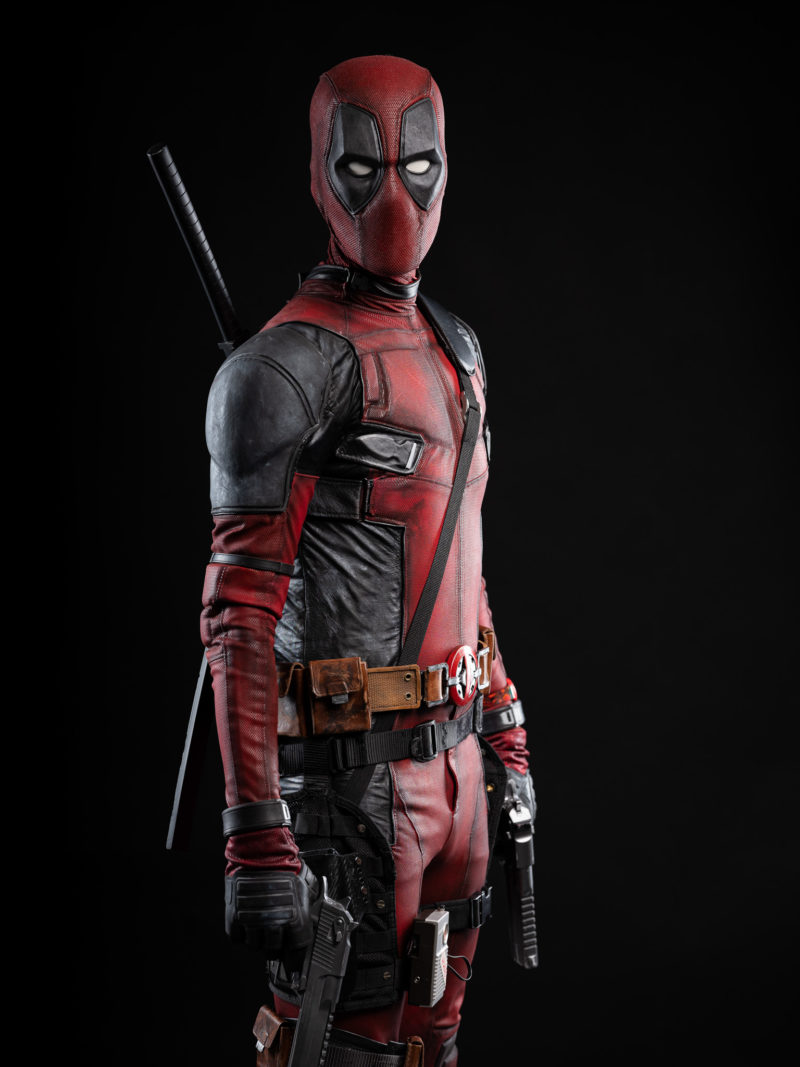 Both images lit using the stripboxes for accents, and the 105 as the keylight, albeit with quite a soft keylight. I found the honeycombs to be very well fitting, without the often seen â€œsagâ€ when the modifier is angled acutely downward, or suspended overhead. The front diffusion panel is decently recessed, creating a really nice falloff when feathering the light without the honeycomb. 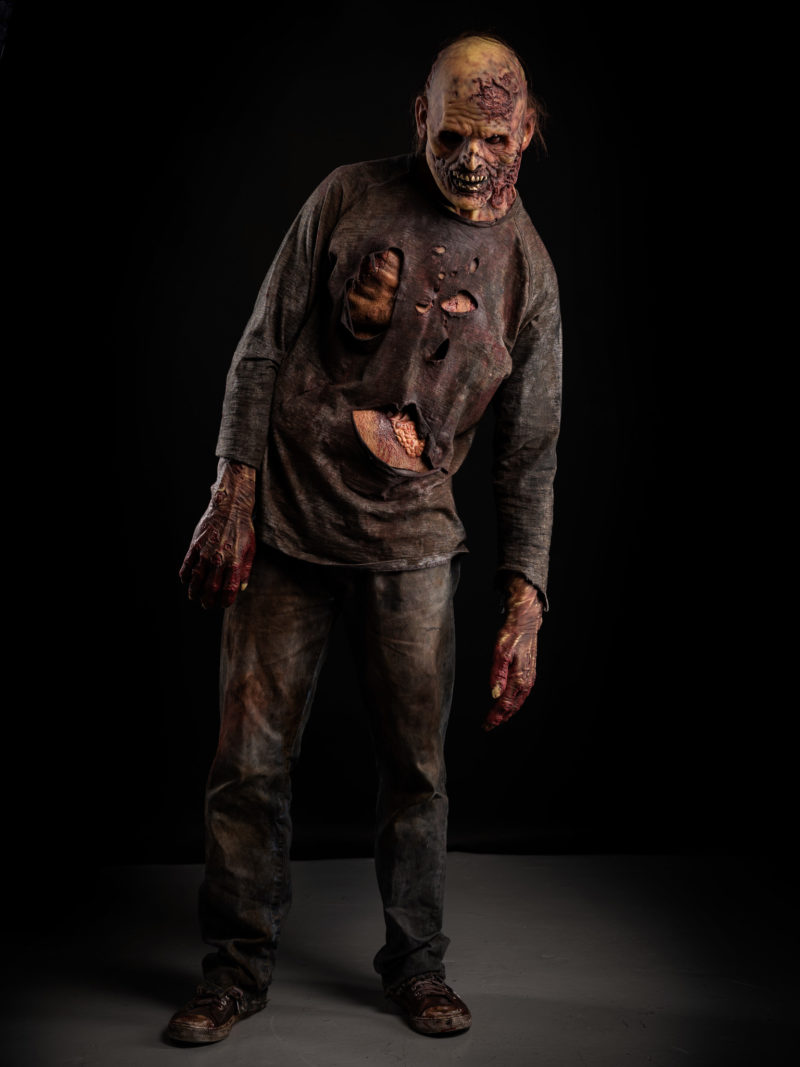 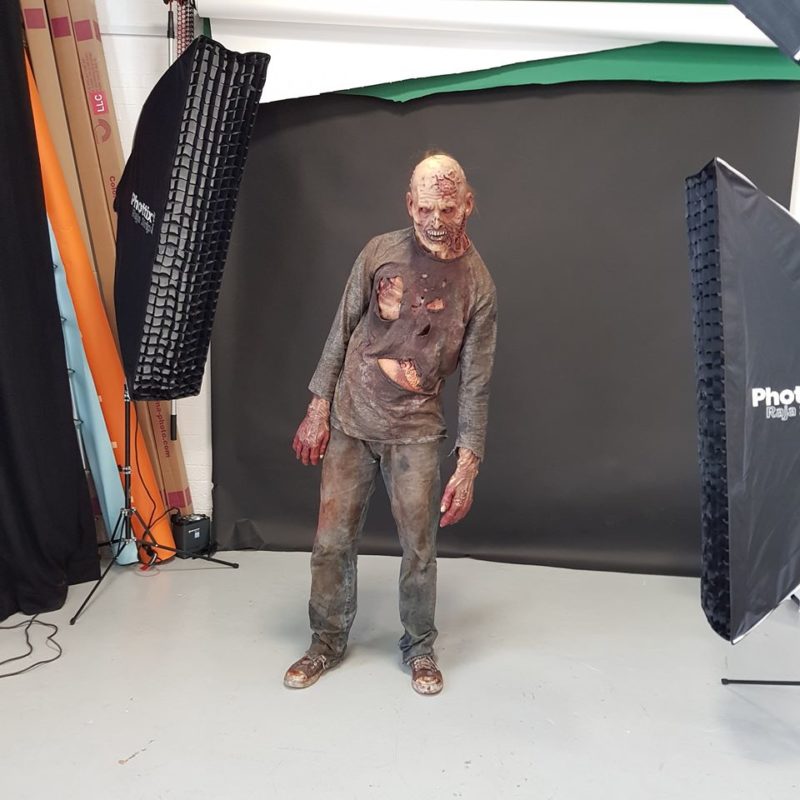 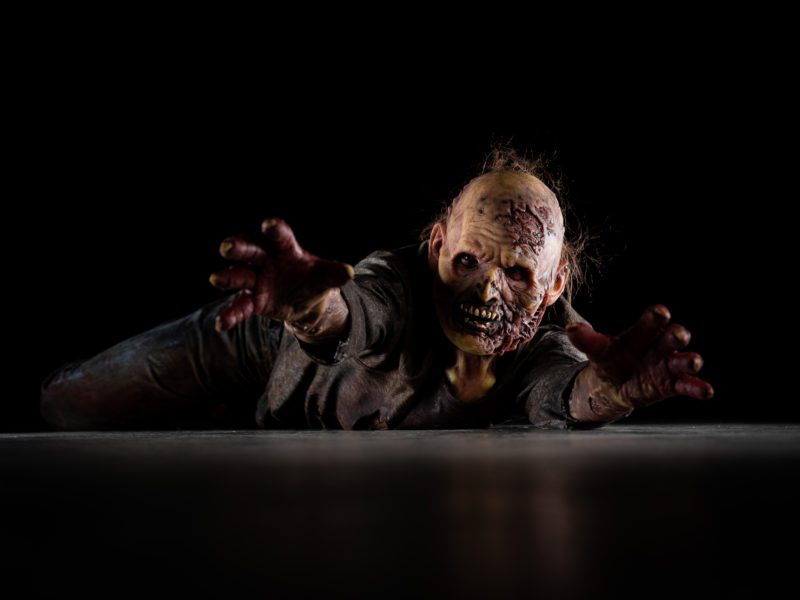 And this is Tarquin from the same workshop.

The above are studio type shoots, and the Phottix softboxes really come into their own when out and about on location. 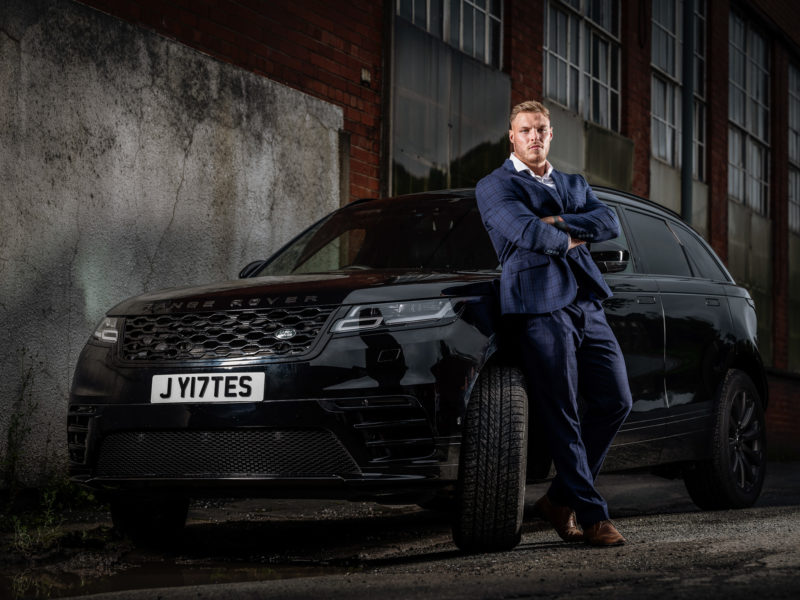 This was for a client shoot for Vir Original, taking place in Darwen. The quick deployment was a real boon. Three boxes fully set up and lights ready to go in under fifteen minutes. On two occasions, a gust of wind took down the lights onto stone or concrete surfaces, without damage to the fabric or rods. The rigidity of the rods and mount was quite noticeable, as the stripboxes remained pointing forward during sudden gusts that blew across them. I’ve seen cheaper stripboxes flex sideways in similar conditions. 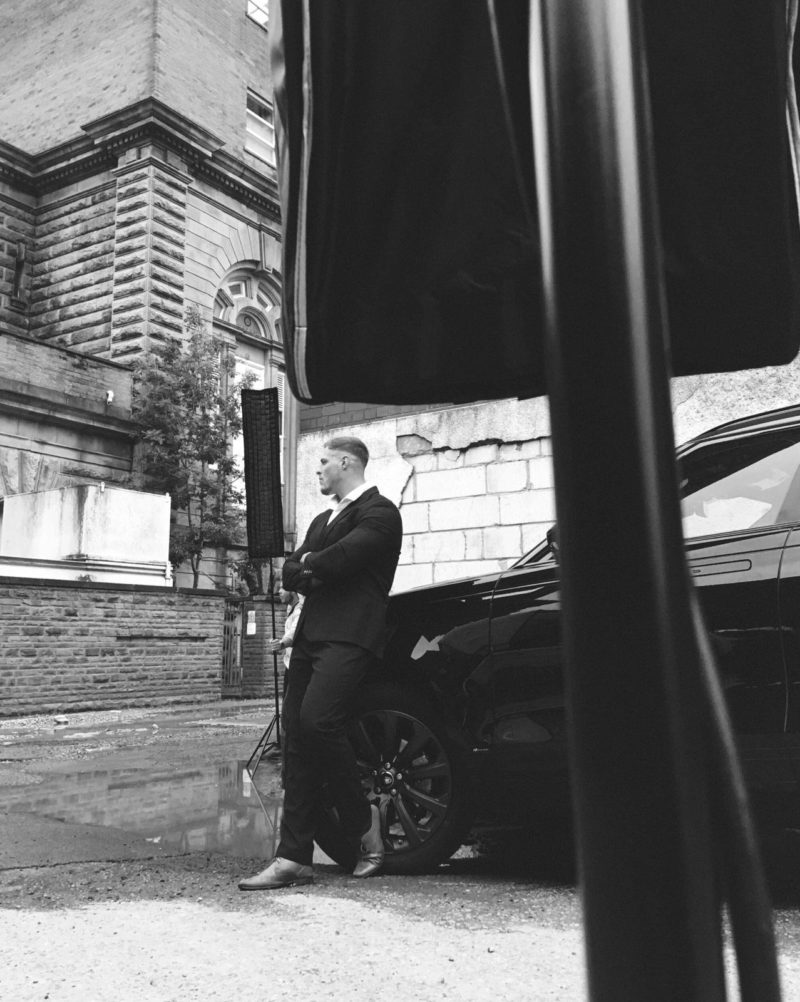 BTS for the above image. 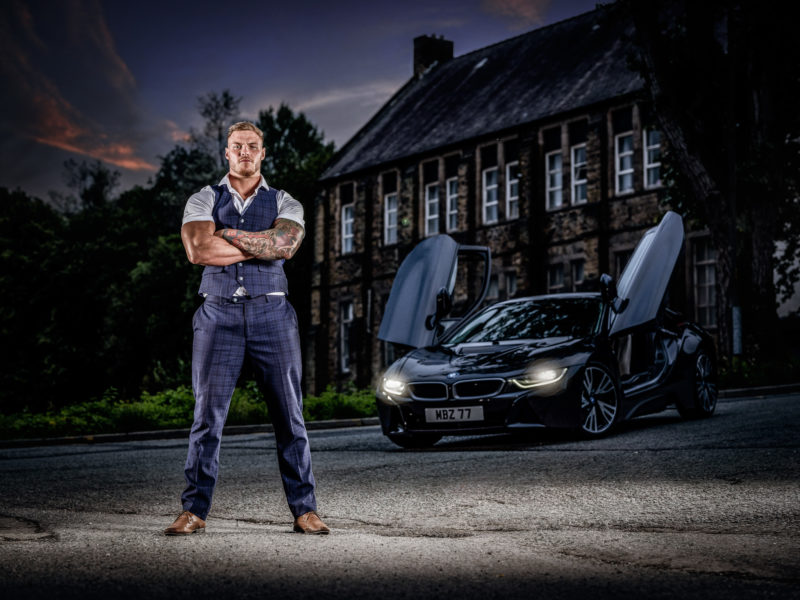 And a final image from the same shoot, using the two strips and a 105.

Helen, my other half, photographs dancers. She needs her modifiers to be lightweight and compact enough for ease of transportation. They also need to be easy to set up and take down, and sturdy in use. She was happy enough with our previous stripboxes, but I got extra browny points when she used the Phottix for the first time. She also forgave me for the purchase too! Win Win! Woohoo! 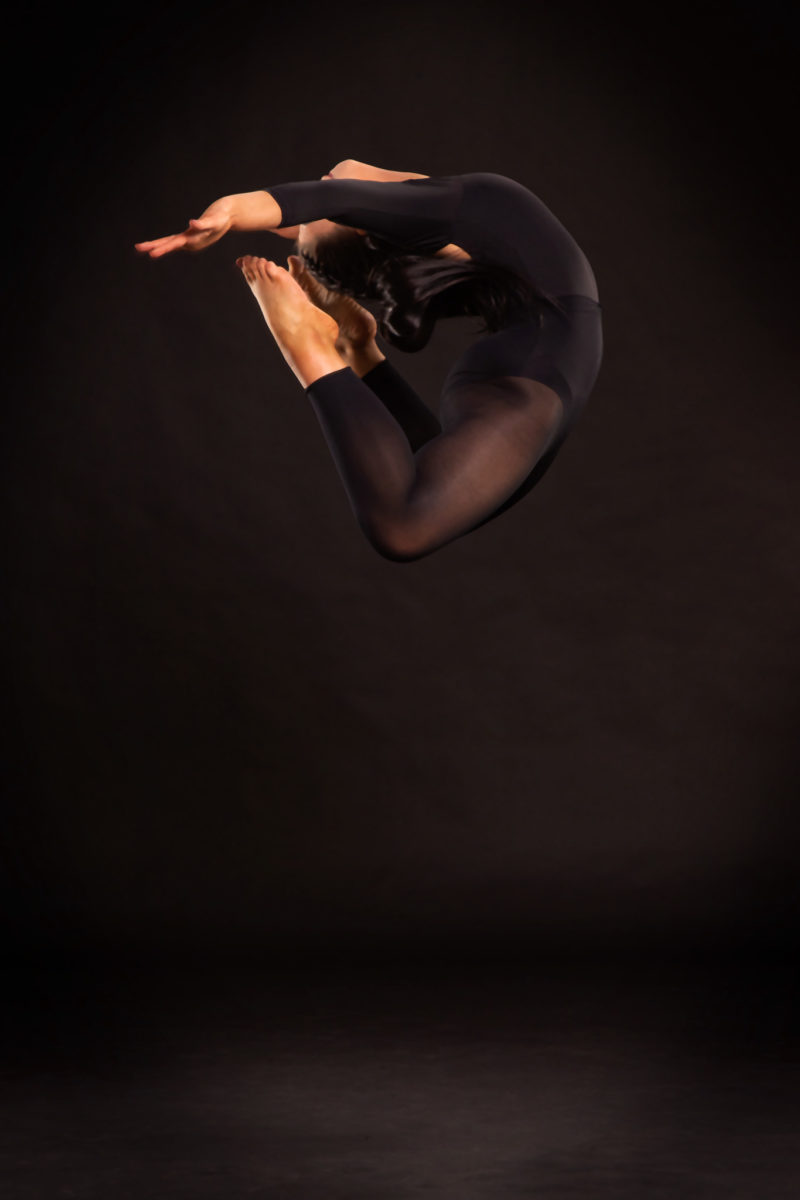 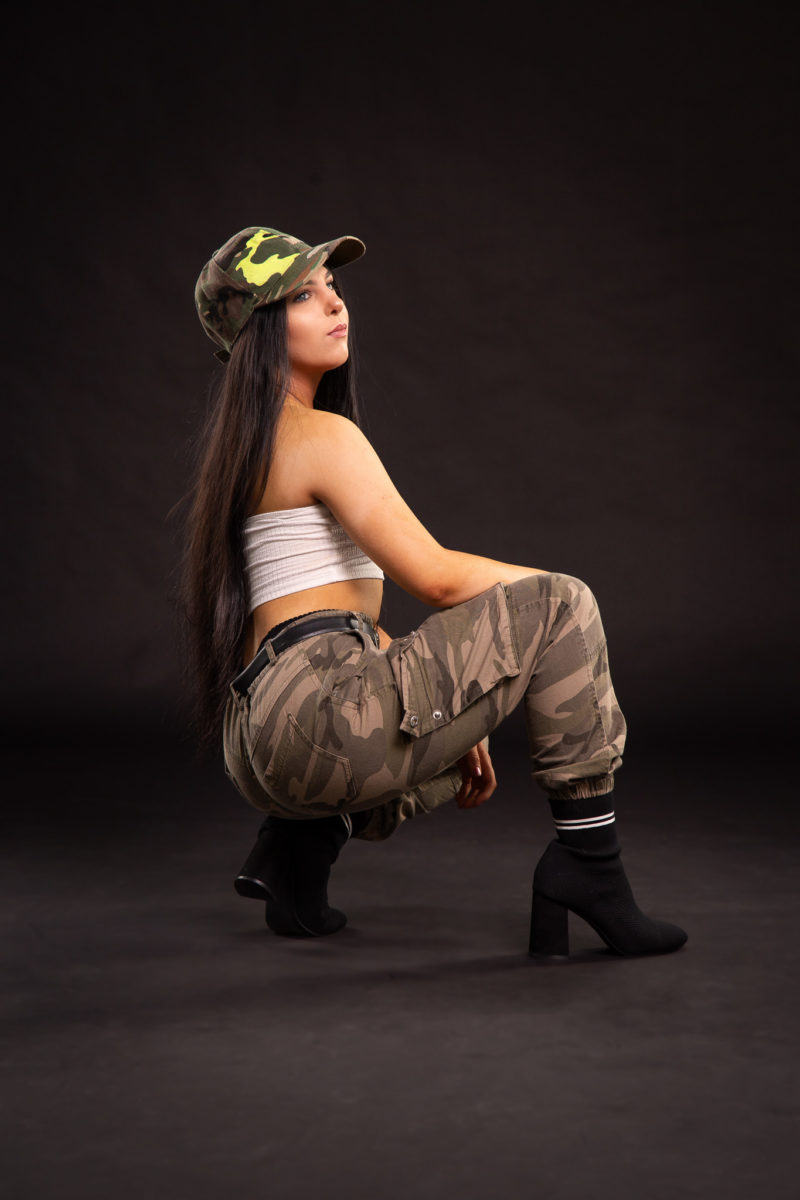 Physically, these stripboxes have so much going for them. The case does a real job of protecting the modifier, and identifies its contents clearly. The internal reflective material is extremely efficient. The one thing I haven’t mentioned previously is the fact that I normally do a light loss test on any modifier I buy. I like to know what the internal reflector is eating. What the two together deduct from the output, and how much light the honeycomb cuts down. Phottix are the only company I’ve come across in my purchasing history, that supply all this information on a card attached to the case. 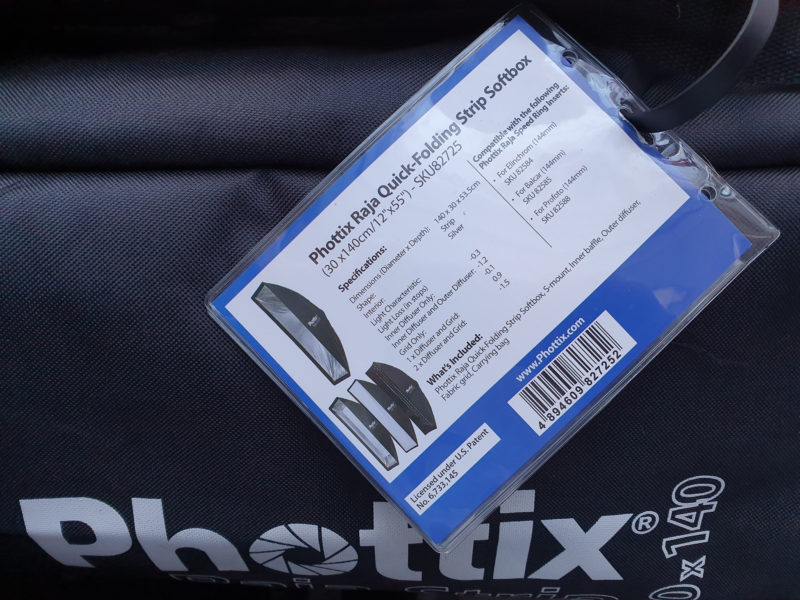 And for your information…..

The quality of the materials and workmanship is right up there. And the rigidity is something else. I do archival photography for the Gawthorpe Textile Museum, and it often entails having fabric laid out, and using a stripbox horizontally to fire across the fabric to bring up the texture. Previously, the strips I’ve used have drooped, and some really badly. The Phottix remained steadfastly horizontal, without any measurable drop at all.

One other thing, and it’s really difficult to quantify, but I had the same reaction from Helen the first time she used them.

I was using my previous stripboxes in the studio, and switched them over. Same lights, same output, same position and same model. Nothing changed except the stripboxes. Yet the new images had something about them. I’m not sure if it’s in the contrast or feathering, but there is a change to the light that just seems far more appealing.

Yeah, I know. It’s not very scientific. So sue me.

This has actually given me a bit of a problem. Helen and I usually work on the same shoots, and it’s not that often we have conflicting shoots and have to work separately. What the hell do I do the next time we have to work separately? I don’t think I can get away giving the Mrs. the older softboxes. Not now.

Hmmmmmm. It looks like I’ll have to buy a couple more. Maybe I could buy them as a Christmas present for Helen?

I can be found at focalpointpro.co.uk

Unless the Christmas present idea doesn’t work out, in which case you can find me in the dog house!