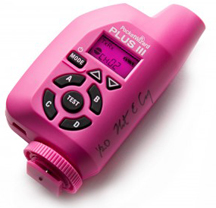 In celebration of the Tutu Project‘s first anniversary, PocketWizard manufacturer LPA Design is co-sponsoring The Tutu Project NYC Gallery Event in support of The Carey Foundation, a breast cancer charity.

Company vice president Dave Schmidt said: â€œIt is such an honor and a privilege to support Bob Carey and his Tutu Project by offering these limited edition pink Plus III radio triggers for auction. Bobâ€™s selflessness and devotion to helping raise funds for women battling breast cancer is truly inspiring.â€

The Tutu Project is a series of artistic self-portraits of Bob Carey wearing a pink tutu in scenic locations. Proceeds from prints and books of the photographs go to the Carey Foundation, which supports women suffering from breast cancer.

To find out how to support the Tutu Project, visit their web site. You can also attend the exhibition in New York, where bidding will officially commence for the pink PocketWizard accessories.