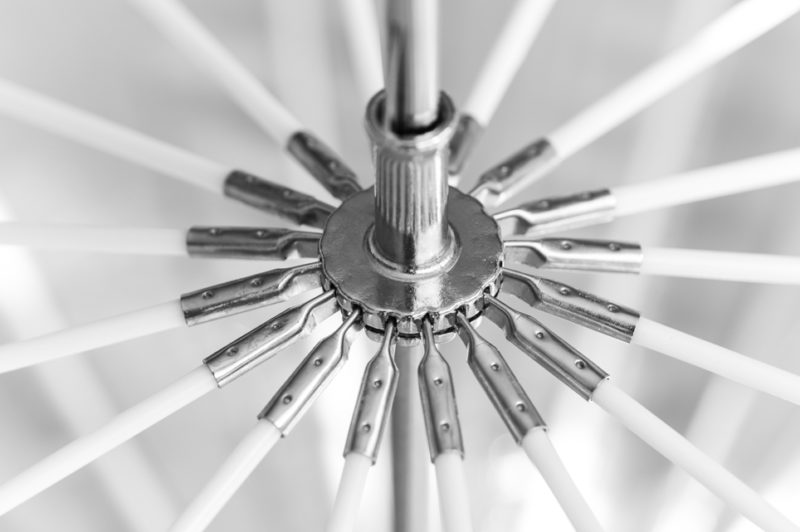 It was raining, hard. We had a lithium-battery flash that threatened to explode if it got wet. But there we were, dry, huddled under the enormous 180cm umbrella from Pixapro; this has been the least of its uses over the last few weeks.

Most photographers I teach don’t get into flash photography because of the harsh results of on-camera flash or the artificial look indicative of bare, hotshoe flashes off-camera. Natural light is just better, they suppose. Well this isn’t true; it’s just important to control the flashlight better.

Hard light produces distinct shadows, soft light has few, soft-edged shadows or no shadows at all. We all know our lighting 101; but often use small light sources that give a hard light. For most pictures, this works well. But have a look at older paintings. From Rembrandt to Goya to Rubens to Titian to Picasso; lots of artists have a large, directional light to camera easel-right. This highlights the main figures.

Therefore, I like to use the biggest practical modifier for a single light to create a more interesting atmosphere. When balanced with the ambient, it can sometime go unnoticed; but makes a big difference when compared with an image without flash. Control is good.

Ideally, I’d use a Broncolor Para 330FB. This parabolic modifier provides several different characters of light by moving the strobe head. But it’s several thousand pounds, heavy, and bulky. So I went looking for an alternative. 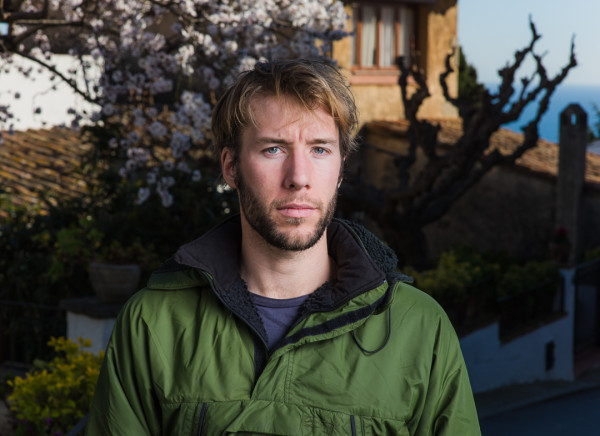 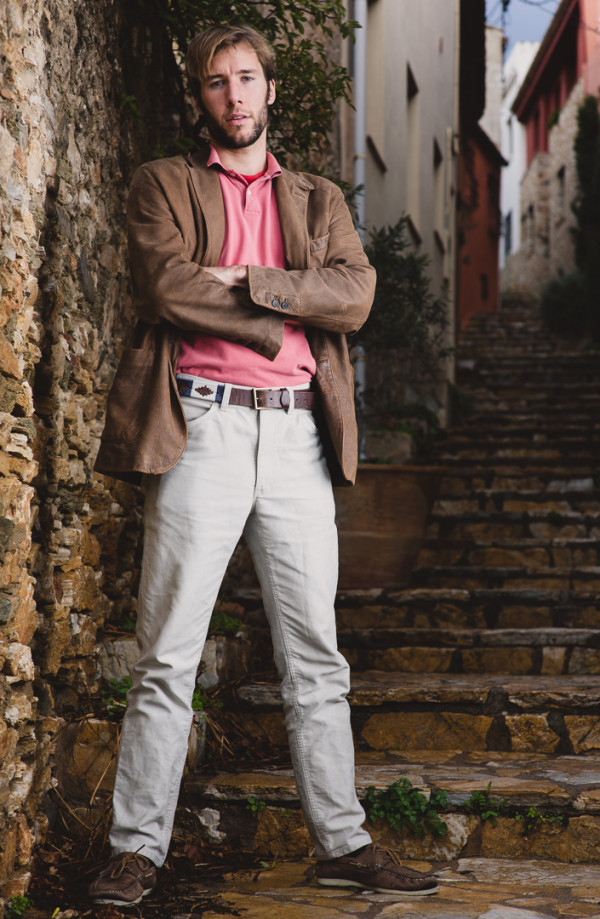 The best value I’ve found so far is the 180cm/71â€ umbrella from Pixapro from www.EssentialPhoto.co.uk. They’re a pretty new UK-based company and make some really desirable gear. In fact they make their own parabolic umbrella too but at 520GBP I haven’t tried that.

Their biggest standard umbrella was only 55GBP however, and I’ve really enjoyed reviewing it. Here’s what I found…

Let’s address this first; at 1.8 metres, it really dominates the space and will dwarf most people. The bigger the light source is relative to your subject, the softer the light, so this size is a real plus for lighting quality.

However, it’s huge! So there will be occasions when it’s impractical to use. I fell in love with the light, and took this beast to Madrid to photograph a film promotion for Warner Bros. However, the ceilings weren’t high enough so I couldn’t use it. 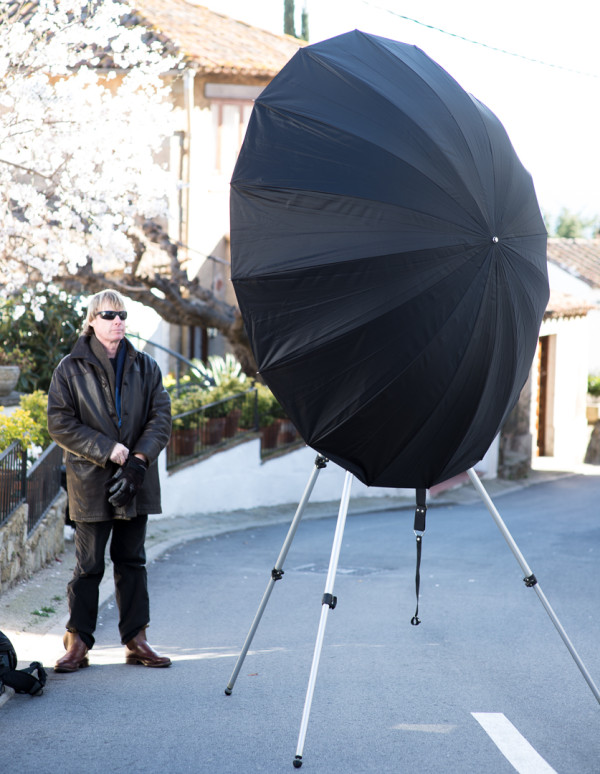 It’s meant as a studio accessory, but I really liked using it on location. However, I didn’t feel comfortable using it on very windy days. It’s like a big sail and I had visions of it flying away. I actually bought a different umbrella mount to use with it; a Manfrotto 026, which is all metal and very solid. This combination was fine with light winds.

It would probably be best to use this with a larger C-stand or heavy duty light stand if you’re using it on-location. Personally, I used an enormous Manfrotto ART 015 tripod instead of a light-stand with a camera bag for ballast â€“ very steady!

It’s supplied with a black sleeve with a carrying strap so despite its huge size when opened, it’s portable when closed. Best of all, it only weighs 1kg. The shaft is 8mm, which is pretty standard.

Umbrellas have historically been built rather poorly, and broke often. Normally, the thin metal spokes were the issue. They bent and snapped, or their sharp points punctured the edges of the umbrella.

I was happy to see that Pixapro have used white fibre rods instead, which are much more durable. They have metal connections and the ends are double-stitched to the fabric. 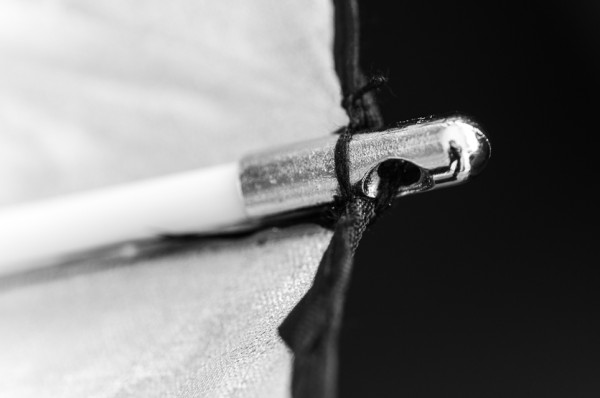 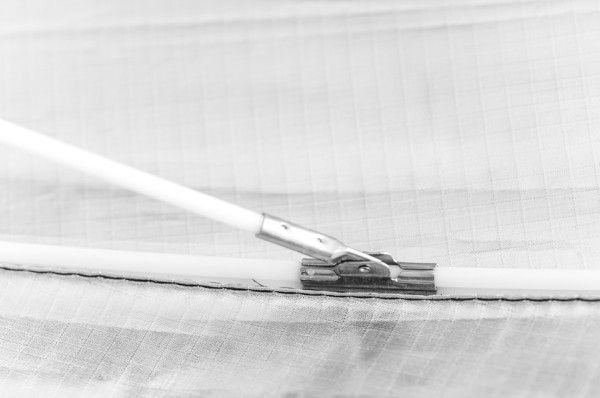 The material is good quality. It’s black on one side and silver on the other. It has a cross pattern which I’m assuming is rip-stop and the durability seems fine. The sleeve/bag to carry the umbrella is made of a lighter material and isn’t as durable. 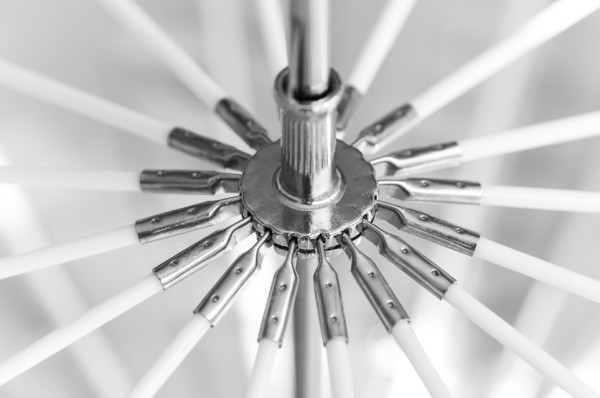 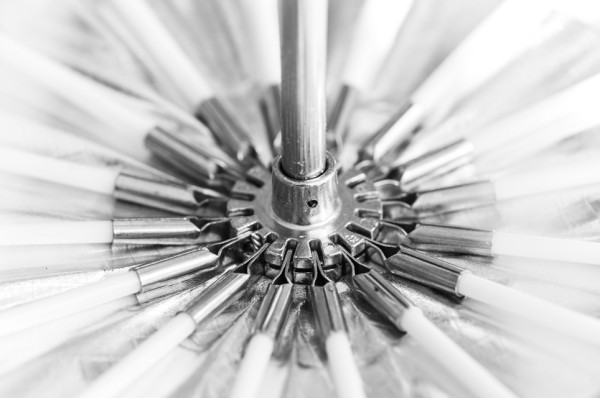 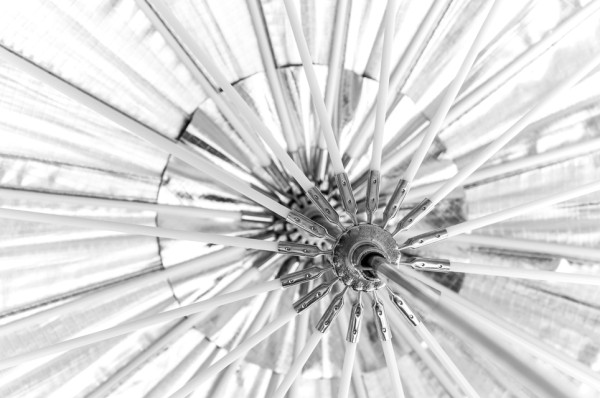 Pixapro opted for 16 ribs to create a better light, and presumably more durability since there should be less pressure on each. Lastolite also make a 180cm umbrella, but it only has 8 ribs and is 230GBP including a clamp and sandbag. It’s good to see that value doesn’t mean cheap and that they’ve created a superior product when comparing the number of rods. They also make a very similar umbrella for 108GBP. 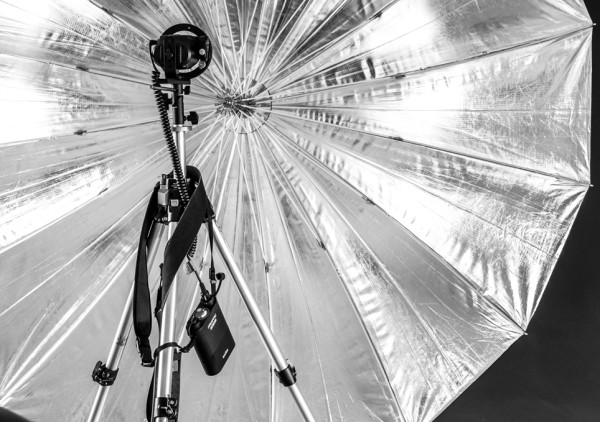 Because of its size, the light has a lovely smooth quality to it. There’s a white option but the silver version I chose (to make the most of the limited power of the flash) has a nice specular appearance. It’s also directional and has a good contrast to it. 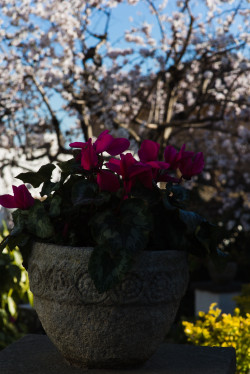 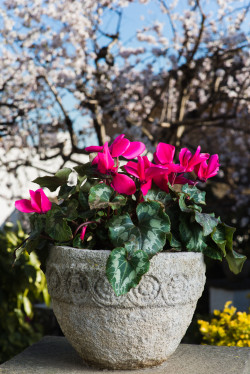 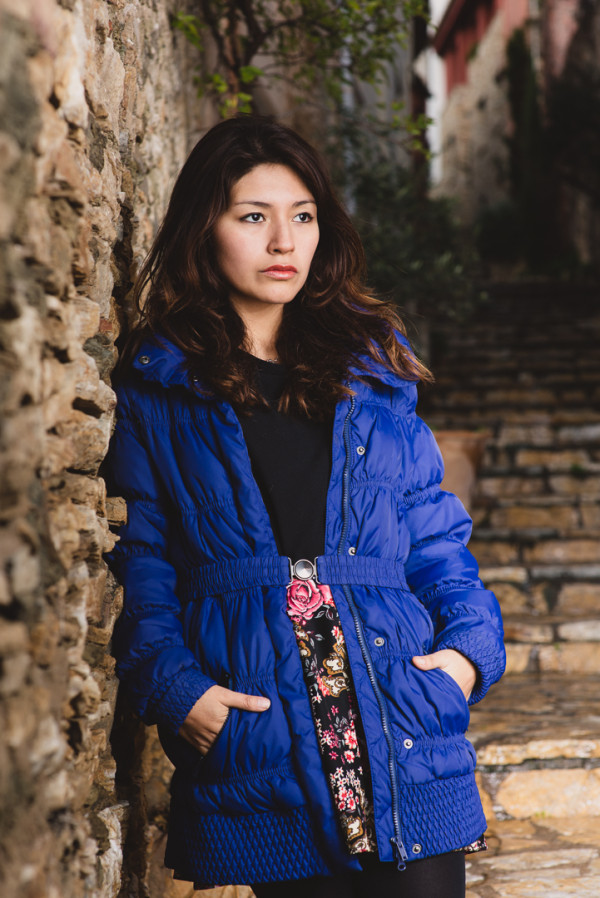 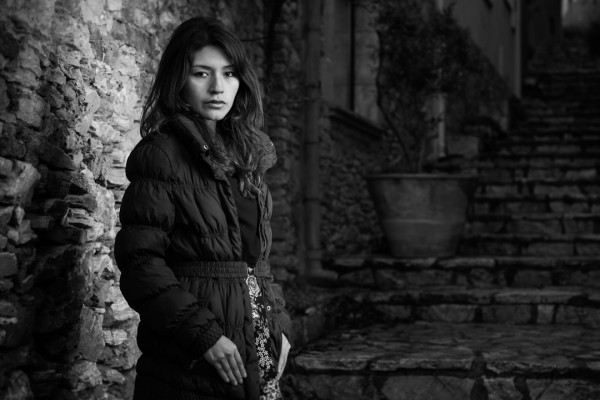 I found a white diffuser cover for a 180cm umbrella online that would transform this into big round soft-box. I didn’t test this but it could make a nice addition.

It makes a lovely light modifier to use on location if conditions are good. A single hotshoe flash may not be suitable to make the most of the umbrella though. This is due to power. Hotshoe flashes use fresnel lenses to project light forward. Since the umbrella is reflective, it’s a challenge to get a wide enough coverage to fill it properly. You could use the Stofen diffuser cap, but that diminishes the power. Some people use several hotshoe flashes but this isn’t ideal.

Therefore, I used this with a proper studio strobe, or more frequently, a bare-bulb Godox AD360. With a bit more than 300Ws, this has enough power to get a good output from the light on location. The bare-bulb illuminates in a much larger arc so the light has a better character. If you have a more powerful portable flash like the Lencarta Safari or Profoto gear, so much the better.

The size means that the highlights are huge and easily controlled. The catchlights are very special â€“ they look like stars. As well as portraits, the size of the umbrella makes it great for product photography. 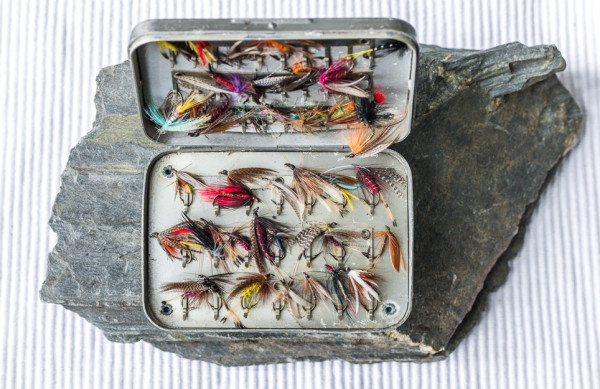 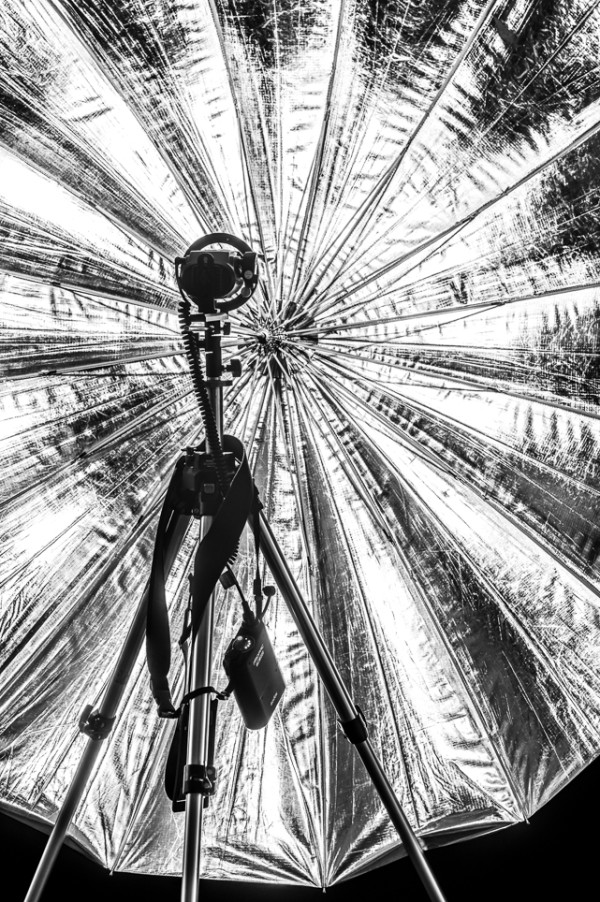 I’ve heard of one photographer who set up lots of large, impressive lights in his studio but typically used only one or two for the actual exposure; the others were set to fire a second too late. He did this for appearance; and it worked. Apparently some clients were heard to say: ‘Wow, look at this guy’s amazing lighting, I’m glad we hired the best!’ Don’t underestimate this effect! Most laypeople will be impressed principally by the size of the light modifier.

The Pixapro 180cm silver umbrella isn’t as versatile or as efficient as a true parabolic reflector costing many thousands of pounds; but the light it gives out is beautiful, and at 55GBP, it makes a great value investment. It’s a great way to get into the large, soft lighting that modifiers of this size can achieve. The build quality seems durable enough that it will last a long time if you look after it. And if it rains, there’s plenty of room underneath!

Ben Evans is an English Photographer based between Barcelona and London. You can find his photography audio book package here: www.GreatBigBear.com/Audiobook