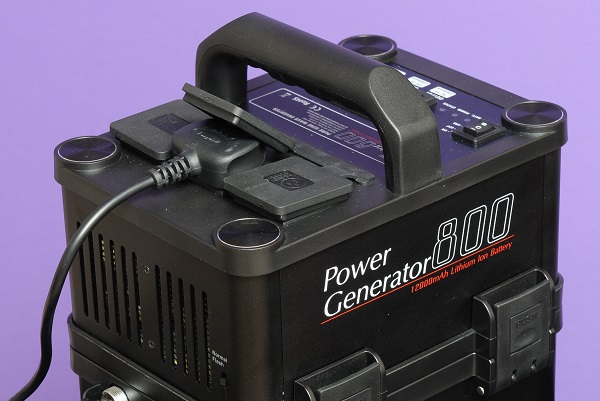 The PixaPro Power Generator is a pure sine wave inverter with a lithium ion battery and three mains output sockets. What does that mean? Basically it is a portable battery that lets you power up to three studio lights (or other devices) as if you had them plugged into the mains.

Why would you consider getting one? If you need studio-style lighting but there is no AC power available and speedlights just won’t do the job, you need an alternative.

You have two options: the first is you can buy a set of location lights with their own dedicated battery pack, such as the PowerCore 400, the Elinchrom Rangers, the Elinchrom Quadras, the Lencarta Safaris or a few other units. Alternatively, you can buy a battery inverter that will run your existing studio lights.

Your best choice is likely to be dictated by just how portable you need to be. If you have to walk around following your subject or hold your light by hand, then you are probably going to be better off with one of the lightweight location lights. If your subject is going to stay more or less in the same place and you need very large modifiers, then a generator is probably for you.

There is more to it than that, but for most people those are the main considerations.

Out of the box the PixaPro PowerGenerator looks nice and solid, with a metal cover, good quality rubber seals, a carry case and a shoulder strap. As mentioned, there are three mains plugs and there are also three USB output plugs for powering mobile phones and iPads etc.

Weight is an important consideration.Â  These things are not designed for you to walk around with in your hand all day.Â  They are robust and they are portable, but I wouldnâ€™t want one on my shoulder for hours on end.

This one weighs 6.2kg. To be honest that means nothing to me. In practical terms, I am a working photographer used to lugging around heavy boxes. This weighs a bit more than my Lowepro camera backpack when I have it ready for a shoot. The backpack has two bodies with lenses, lots of spare batteries, lots of data cards, some gaffa tape and chocolate in it. (Before you ask, not that much chocolate!)

In short, this unit weighs less than you might expect and it feels solid.

Well, using these things is pretty simple. You charge it for 3â€“4 hours (OK, usually overnight) and you pop it in the van. When you want power, you plug your studio light into it as if it were a mains socket, select â€˜normal flash modeâ€™ on the side and turn it on. Thatâ€™s it â€” get on with your shoot.

You can unclip the battery from the bottom half of the generator and pop a spare on â€” that takes less than a minute.

You can also run it in â€˜normal modeâ€™, allowing you to power computers, laptops, printers etc. You shouldnâ€™t run normal mains items at the same time as studio flash units. You also can not power the USB ports at the same time as the studio lights, which was a bit disappointing, but to be honest I already have a couple of Â£20 battery packs for my phone anyway.Â  I donâ€™t really think this is a deal-breaker on the unit.

OK, usually I use location lights, so I have not used a generator before. So I made a classic schoolboy error and ran a pair of 400Ws studio lights off the pack. The lights ran just like they were plugged into the mains. Forty minutes later it ran out of juice. My mistake? Two 250W modelling lights at full power. Oops. OK, donâ€™t run old-fashioned modelling lights at full power.

On my second shoot things went differently. I hung it off a lighting stand and it made rather a nice weight to aid with steadying the light. I was using them inside rather than in a field, but I had a 400W studio light running without the modelling light at a black-tie ball.

The flash was turned to half power and the generator didnâ€™t run out of power all night, working most of the time between 7pm and midnight. I donâ€™t rush my shots and I didnâ€™t count the number of flashes, but it lasted all night and we sold lots of photos. After each flash, the cooling fan ran for a few seconds, but other than that I didnâ€™t really notice the generator.

Apparently you have to be careful to ensure you have it in flash mode, as in â€˜normal electrical modeâ€™ it doesnâ€™t have any power-saving system and in less than a day it will be flat.

I did one final, rather dull, but more scientific test. For this I ran a single PixaPro Lumi 400 head at full power, triggering the light continuously every time it had fully cycled until the battery ran out of power. I achieved 1,166 shots out of the battery before it gave up.

I like the PowerGenerator, and if I need to use big modifiers on a location shoot, I wouldnâ€™t have any problems getting one of these to power my lights. In truth, I would probably need a couple because I donâ€™t like long mains leads between my lights, but that is personal preference and you could run up to three lights.

Available now, the PixaPro PowerGenerator 800 is about Â£700 from UK seller Essential Photo. In the USA, it is sold as the Flashpoint PowerStation PS-800 ($900).