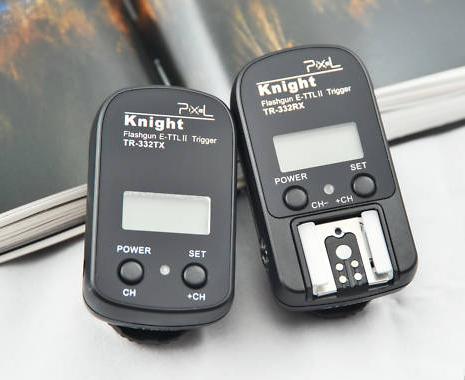 Pixel‘s Knight TR-332 TTL triggers (for Canon) have been givenÂ an extensive review, thanks to Clive Bolton.

A new entry into the foggy world of hot-shoe flashes with its proprietary systems, brands, patents, terms and technologies is Pixel Enterprise in China. Their battery packs have already been favourably received. Their TTL wireless triggers have had a stumbling introduction. The Nikon version came out before it was ready, and reaction was justifiably poor. A Canon version was released as a beta, and has been back for further development. It has a programmable ROM, which enables significant development to be implemented. It is now commercially available. The writer has no relationship with Pixel Enterprise except as a paying customer.

What does Pixel’s Knight trigger try to do, and how well does it do it? This review looks at the Pixel Knight triggers using a 50D, a 580EX II and some 550EXs. Early manufacturer claims were ambiguous; this review uses information from the Product Manual (1 Feb 2010), the current pixelhk eBay listing and the pixelhk.com website.

You can read the full review (part 1) Â here.