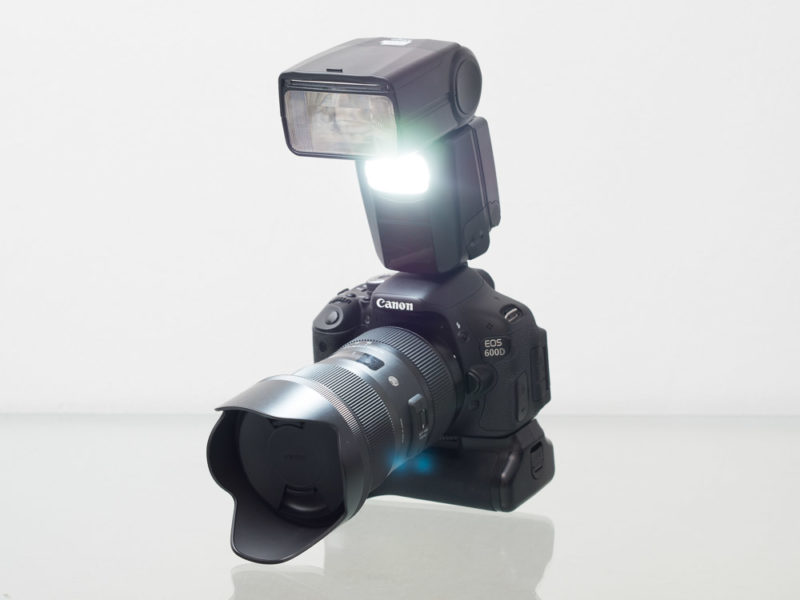 Two years ago the trend for Chinese manufacturers was to release cheap manual power flashes, but now this has changed: we see a clear shift from manual power to TTL. YongNuo has become the go-to brand if one would need a TTL flash with decent build quality at a great price point. They were the first brand that understood that the build quality and performance is more important than a race to the bottom. In the end gear has to be affordable but also dependable.

Lately other flash manufacturers have understood this philosophy as well, starting to release sub-$100 flashes with reasonable quality. Often it meant that one would have to compromise on some features (HSS, flash power, AF-assist or ease of use) but with the introduction of the Pixel Mago this compromise seems to be no longer needed. 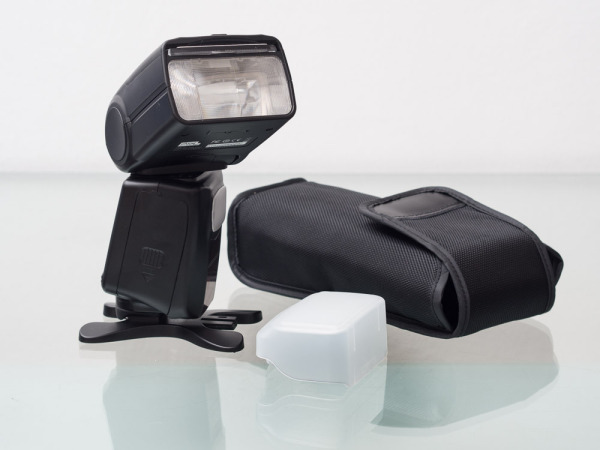 The Mago is a TTL HSS speedlite from Pixel Enterprise, known for the Pixel King Pro triggers. It features all the specifications (see listed underneath) that could be commonly found in high-end flashes, but doesn’t come with the same price tag; this flash can already be yours for a mere US$88.

Lighting Rumours was eager to find out if this flash is indeed as good as they say. Fortunately for us, Pixel agreed to send a review sample for testing and evaluation. In this review you can read if this budget speedlite delivers.

After opening the box we find the contents that can be commonly found with all speedlites. A protective pouch, Stofen-style diffuser and a flash stand are part of the kit besides the speedlite itself. Tilting and rotating the flash head requires more force than I am used to, but it when you have set the desired position of the flash head it does stay in place. On the front of the flash there is a AF-assist module but also an LED light. Although the flash tube and the LED light are not located inÂ the same place, LED light could be used as makeshift modelling light. It seems to be made for photographers that shoot occasionally a video. 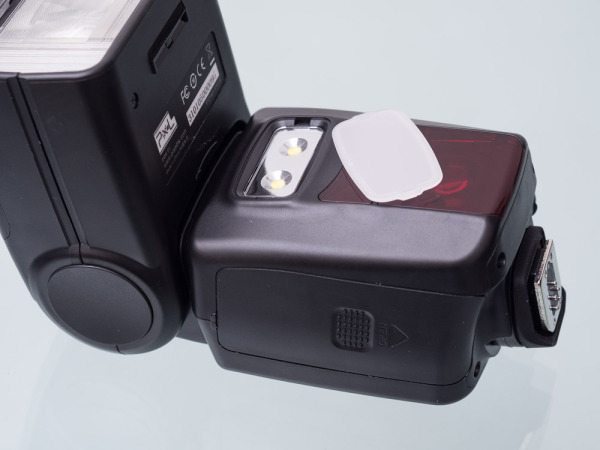 The flash can be turned on after inserting 4 AA batteries viaÂ a rotating switch on the back. On the rear,Â a dot-matrix LCD screen comes to life displaying the current settings. The screen is nice and big and clear to read, with or without backlighting. Under the screen are found quite a largeÂ number of buttons, which have a nice feel to them. The first impressions of the unit are good; I certainly wouldn’t have said that the flash would have cost less than $100.

Often it is the case that with cheaper speedlites you compromise on the build quality â€” essentially you get what you pay for. I am happy to inform you that with the Pixel Mago this does not seem to be the case. The build quality seems to be good, the different parts from the flash fit well together and there is no play between them. 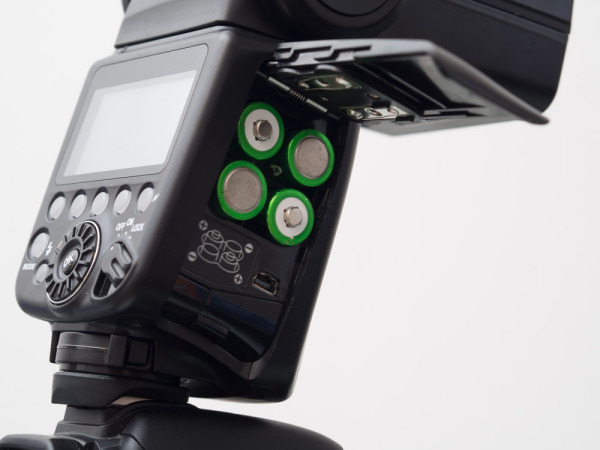 Like expected, the hot shoe foot of the flash is made out of metal but it has also an additional feature that is uncommon for flashes at this price point. When locking the hot shoe a little rubber collar comes down which makes contact with the camera body, thus reducing the likelihood that debris or water comes in your hot shoe. I wonder why they included this feature since I highly doubt that the flash is otherwise water-resistant.

I have only two remarks regarding the build quality, on the tilt and rotation mechanism and the Stofen diffuser. It seems thatÂ  to lubricate the tilt/rotate mechanism Pixel used a very thick kind of grease, which means the flash keeps the position where you set it in very well, but it requires a lot of force to move it. So much that I have the feeling that I have to hold the body of the speedlite, otherwise the stress on the flash body might damage it. Another remark is about the Stofen diffuser which is slightly too big. When attached to the head of the speedlite it has some play and comes off rather easy.

All the buttons on the back of the flash are big and intuitive to find. Without a manual one would quickly understand exactly what the buttons did. The buttons under the screen are not labelled but instead the screen shows what this button does, resulting in a more flexible user interface. While the tactile feedback on the buttons is good, i.e. they have a good â€˜clickâ€™, the rotating dialÂ is not so great. There is a bit of dead area before your input is registered. I need to rotate the wheel more than expected to make an exposure adjustment. After some time you do get used to it, but it could have been better. 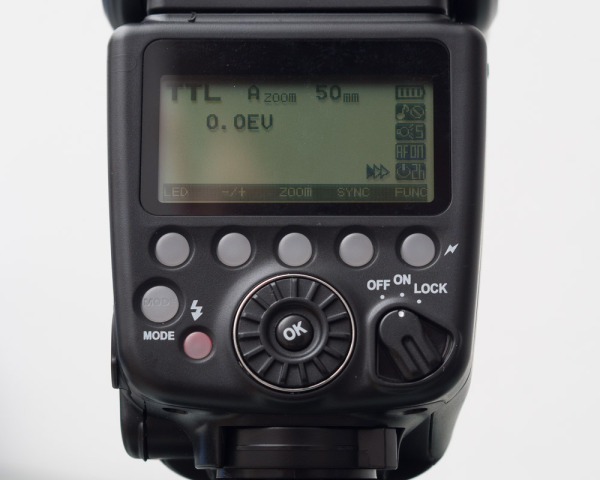 The screen on the back has slightly less contrast thanÂ the Canon 600EX-RT but does feature an excellent backlight. Irrespective of the ambient conditions it should be easy to read the current settings. Both the pixel pitch and size are higher than one would commonly find with other speedlites, which mean that a lot of information can be displayed simultaneously on the display without that it becomes cluttered.

During the occasions I have used the Pixel Mago I did not notice any issues regarding the E-TTL exposure. It would expose photos as well as would be expected from a TTL flash. Something similar can be said for the HSS mode. It works well at any speed and gives an even exposure over the whole frame.

I have some problems triggering the flash off camera using a â€˜dumbâ€™ manual trigger. Somehow the central pin which is used to fire flash didnâ€™t make contact; I had to wiggle it back and forth to get a connection. For me it is unclear if this is due to the design of the hot shoe or if my unit is faulty.

Unfortunately when the LED of the speedlite is turned on it will no longer flash. There is no possibility for activatingÂ the continuous light and the flash at the same time.

Concluding, Pixel managed to create a rather nice TTL speedlite. It features almost all the same specifications of other high-end speedlites but it doesn’t cost you an arm and a leg to get them. While the functionality of the flash might not be revolutionary (other flashes do the same) the price for which all these features can be acquired is quite impressive.

One thing that you should be concerned about is the compatibility with other triggers.Â  For example, there are severe problem if one would use the flash in combination with the YongNuo YN622C triggers. It seems that Pixel does not play nicely with their competitor YongNuo.

Also, there is something else thatÂ I cannot comment yet on, which is durability. Newly-released flashes haveÂ not passed the test of time yet and it is unknown how reliable they are. From YongNuo for example we know that most flashes are reasonably durable â€” but are not as durable as Canon flashes, for sure.

Summarizing, I can certainly recommend the Pixel Mago to others. It is for sure the best build cheap TTL flash. If you are still in need for a TTL HSS flash, then it is a no-brainer for $88. For a lot of people this would be a great choice for their first flash, but also for people that are looking to supplement their existing lights.

The Pixel Mago is available now on eBay and Amazon. For more information, visit the manufacturer’s web site.