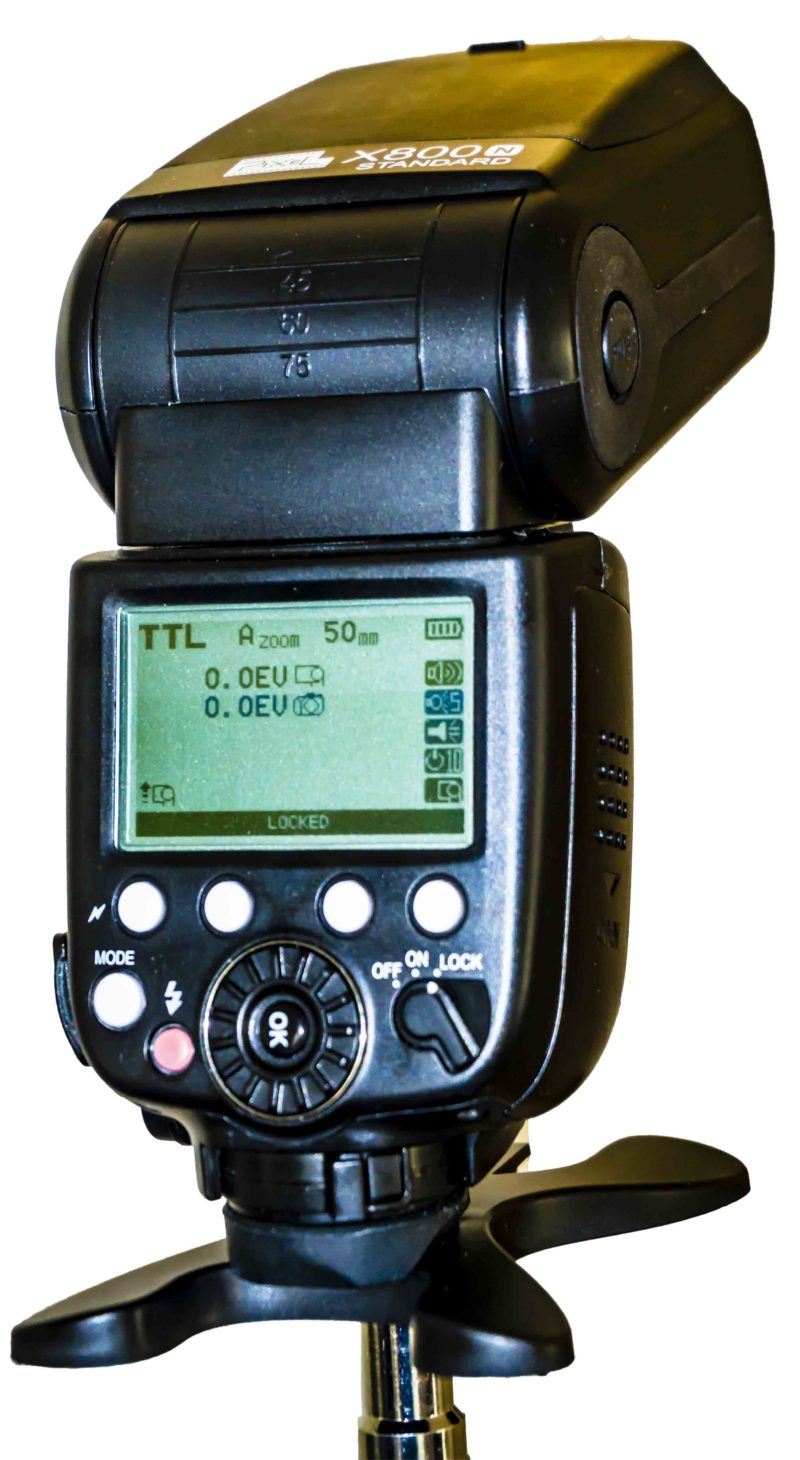 Reader John R. Amelia, a photographer based in New Jersey, was kind enough to send in his experiences with the new Pixel X800N flash, which we have published below. Our own review is coming soon. – D.A.S.

Pixel Enterprise have released the X800N iTTL flash for Nikon.Â  I was fortunate enough to have been selected for their Testing Program for this new Nikon Flash.Â  In the profile that Pixel Enterprise requested, they asked, â€œWhich flash models do you already own?â€ and I responded with the following:

Pixel Enterprise was fully aware that I owned a Shanny SN600N. I make reference to this fact because either they are using the same parts suppliers or they are manufactured in the same facility. Either way this is no different than something I read years ago about both Nikon and Canon using Panasonic to manufacture their flash products and that both of them use some of the same internal parts. [citation needed -D.]

Images and specifications are available on Pixel Enterprise’s website.

My first impression is that the functionally and build quality is exceptional, particularly for a sub-$100 unit that does almost everything the brand name Nikon flagship SB910 does (the latter being listed on B&H for $546.95).Â  The Amazon price for the Pixel X800N is $99.50. So for the little minor things that the Pixel X800N does not do or where the Nikon SB-910 outperforms it, you could buy five units for the cost of one Nikon SB-910.

The menus and function buttons are simple to navigate and the interface is intuitive to use.

Marketing on the Pixel Enterprises website states that the GN is 60 at ISO 100, 200mm but that is not what I found in testing the unit with my Sekonic Flashmaster L-358 light meter.

The table belowÂ shows my results using various distances from 3 feet to 6 feet across the zoom-headÂ  positions of 35mm, 50mm and 200mm. (Nikon values from kenrockwell.com)

The battery compartment looks identical to the Shannny SN600N flash. In fact the two units have a very similar look and build.

My first attempt at loading batteries into the unit with recharged Tenergy 2300mAh Ni-MH did not allow the unit to turn on. Instead I got a low battery warning. My other flashes also are finicky with the Tenergy 2300m Ni-MH but do function. I loaded Tenergy Ready to Use 2300mAh Ni-MH and the unit came to life.

In order to hit a full power recharge in 2 seconds for a 75J unit, it would need to draw 37.5J per second from the batteries assuming no losses with an ideal transfer of energy. More realistically the batteries need to provide more than 40J per second. At 1.2V for the rechargeable batteries used, they would need to provide more than 8.3A of constant current draw and pulsed current would be even greater. Also hitting a 2-second recycle would suck the life out of the batteries faster, providing a lower number of full cycles per set of batteries.

I power up the X800N from the External Power Port with my Lumedyne Minicycler and did some full power rapid fire testing.Â  Firing about every second for the counts in the table. Â The table above summarizes my results of that testing.Â  After a count of 45 I gave up.Â  Interestingly at the Zoom of 20M Thermal Cut-off occurs for about 1 to 2 minutes until the unit cools down.

In the belowÂ image of my daughter and her husband the following light setup was utilized:

The following setup shot shows the Pixel X800N firing correctly in the softbox during testing.

As far as comments from other reviewers I had no problem with any of the features or options.Â  The X800N is easy to use and works as advertised with the exception of the overrated GN.Â  The rich features and options demand more than the sub-$100 price.Â  If you shoot with Nikon and other cameras the built-in optical sensor is a nice feature for non-iTTL triggering.Â  In conclusion the engineering, design and feature compromises â€” not that they are many â€” are more than justified by the price.